My flight from Cairo to Kathmandu required an overnight layover in Istanbul, Turkey.  Seeing as I spent a week there just last October, I knew exactly what I wanted to do:  Stay at Cheers Hostel, eat some Turkish köfte (meatballs) at my favorite old school joint across from the Hagia Sophia, and get a haircut and straight razor shave at the same barber shop I went to last year.  That's it.  No touristy stuff other than nab a couple photos of the Hagia Sophia and the Blue Mosque as I waltzed past them.  Easy Peasy. 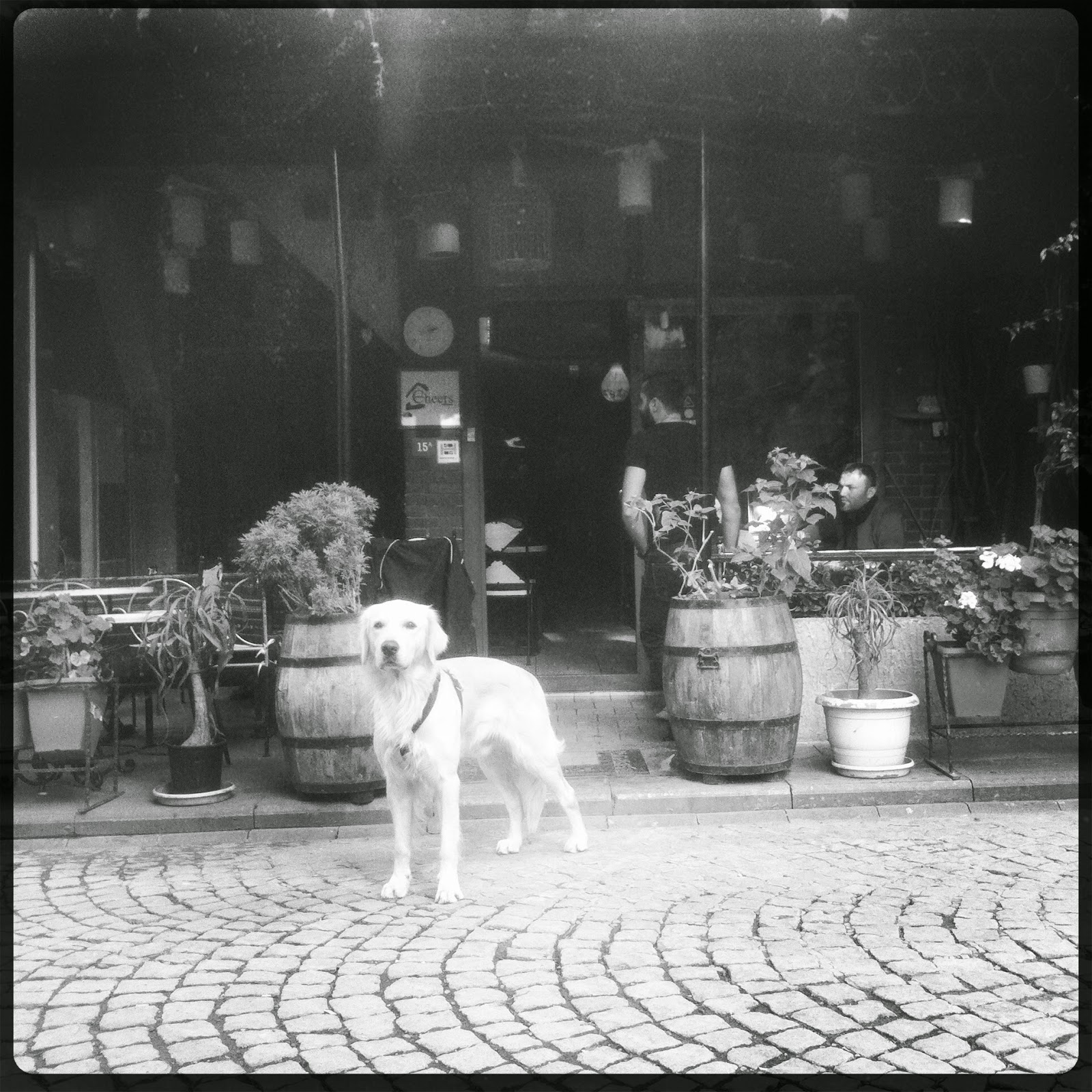 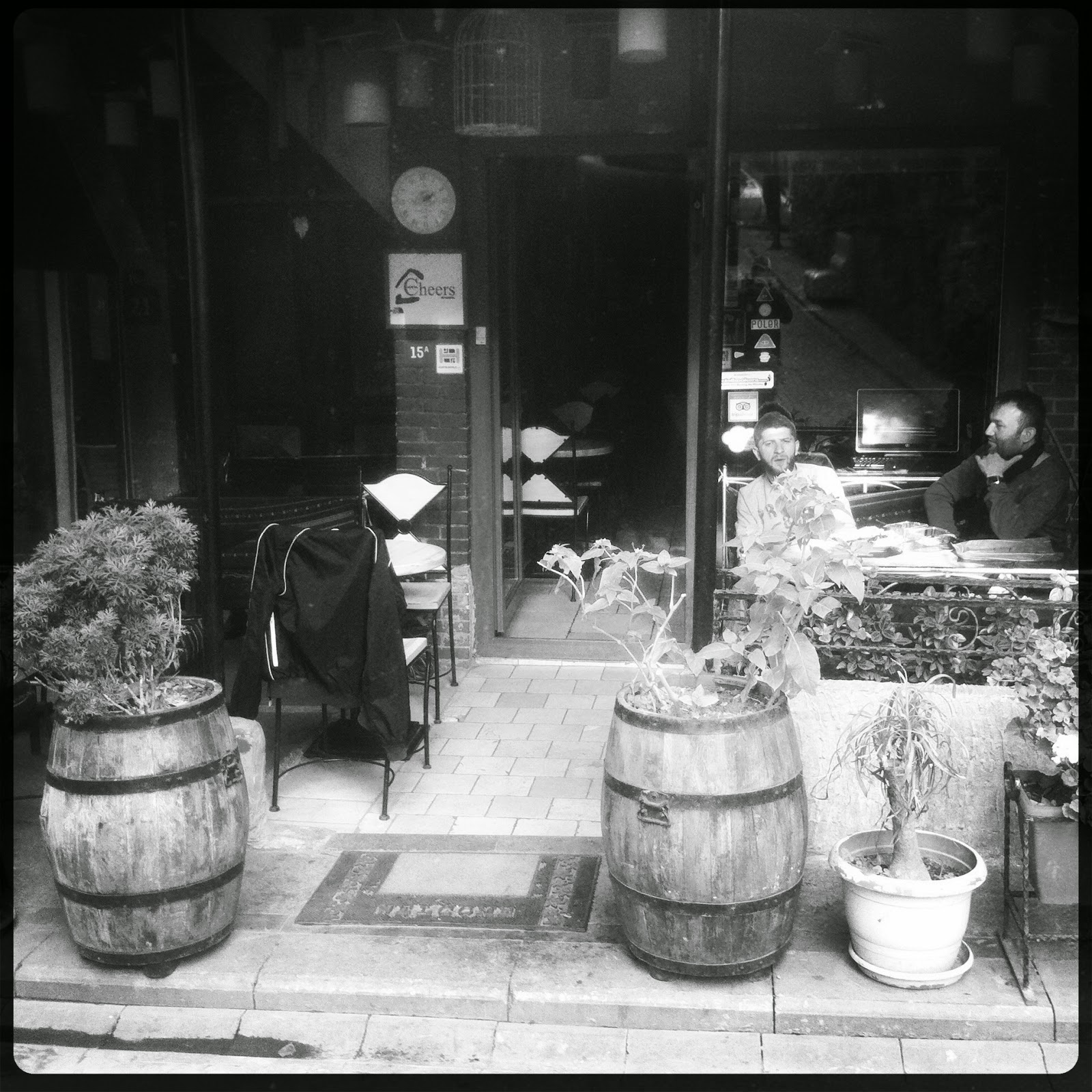 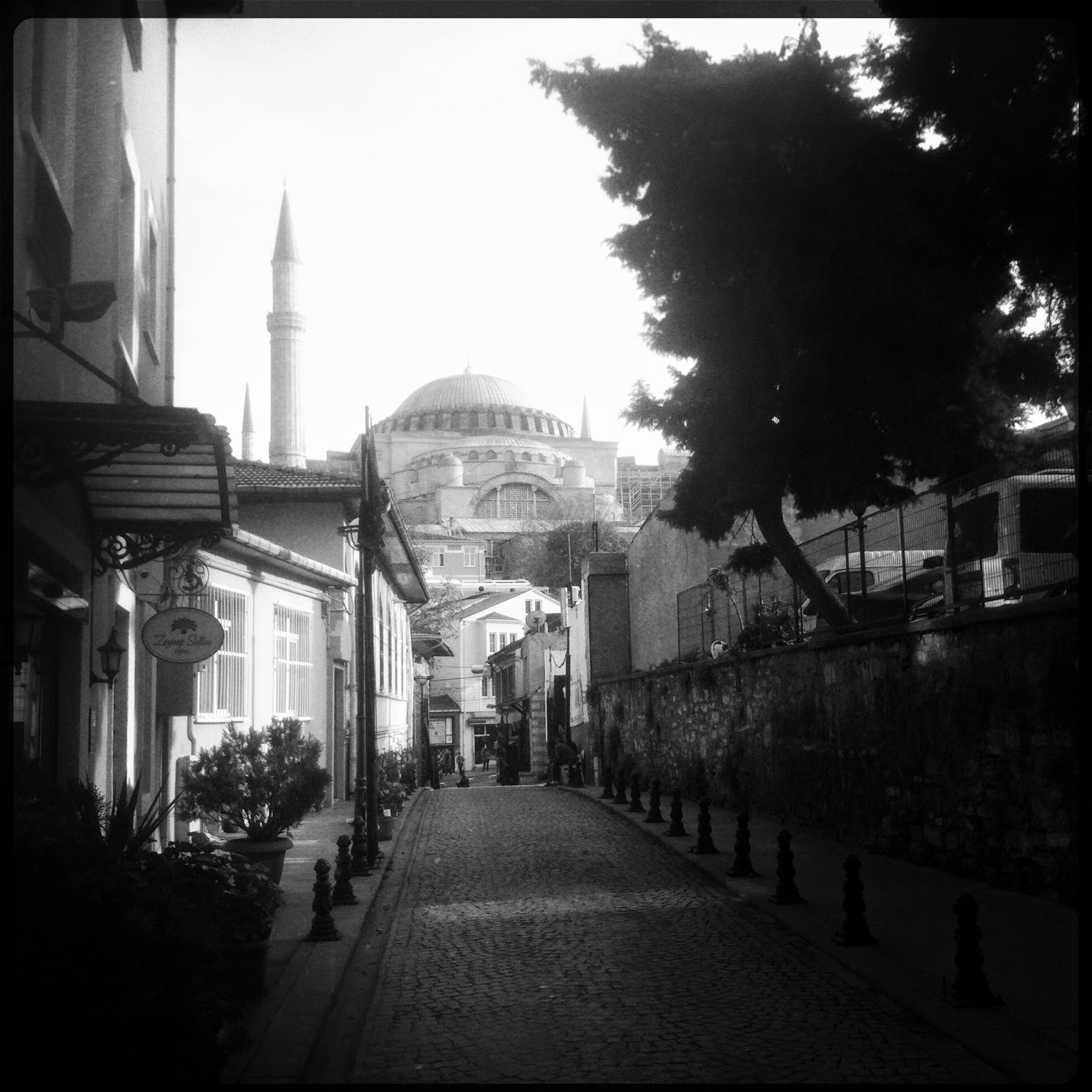 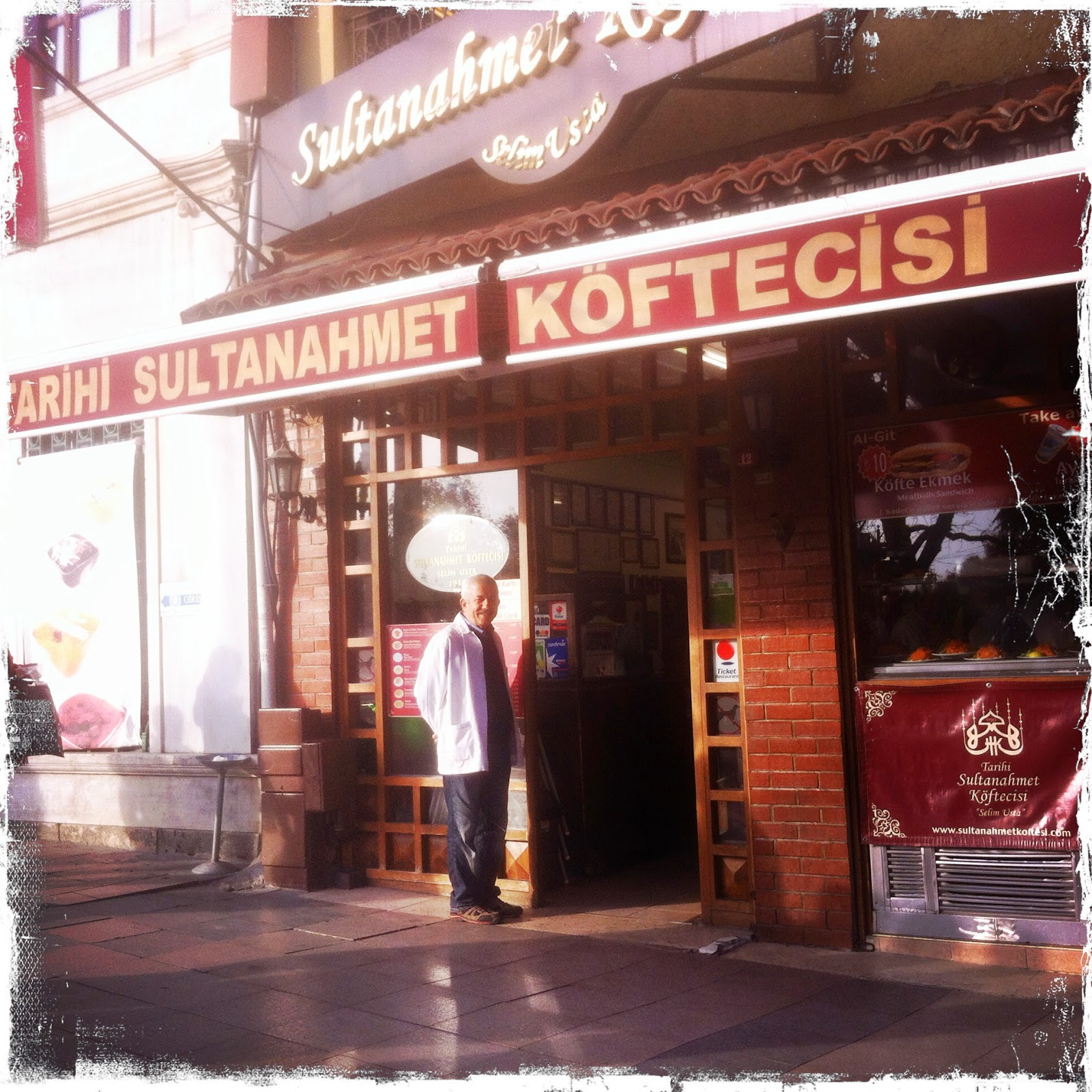 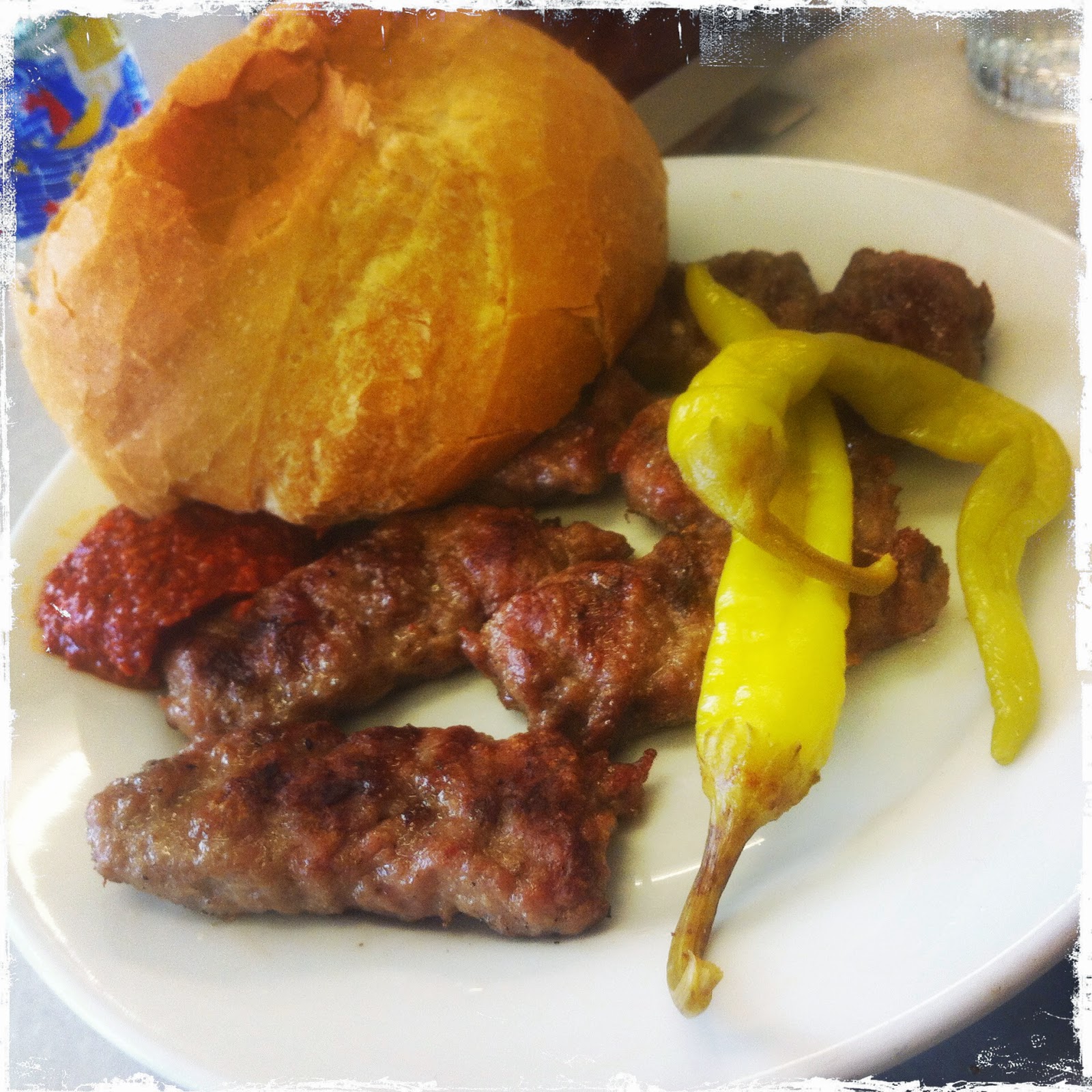 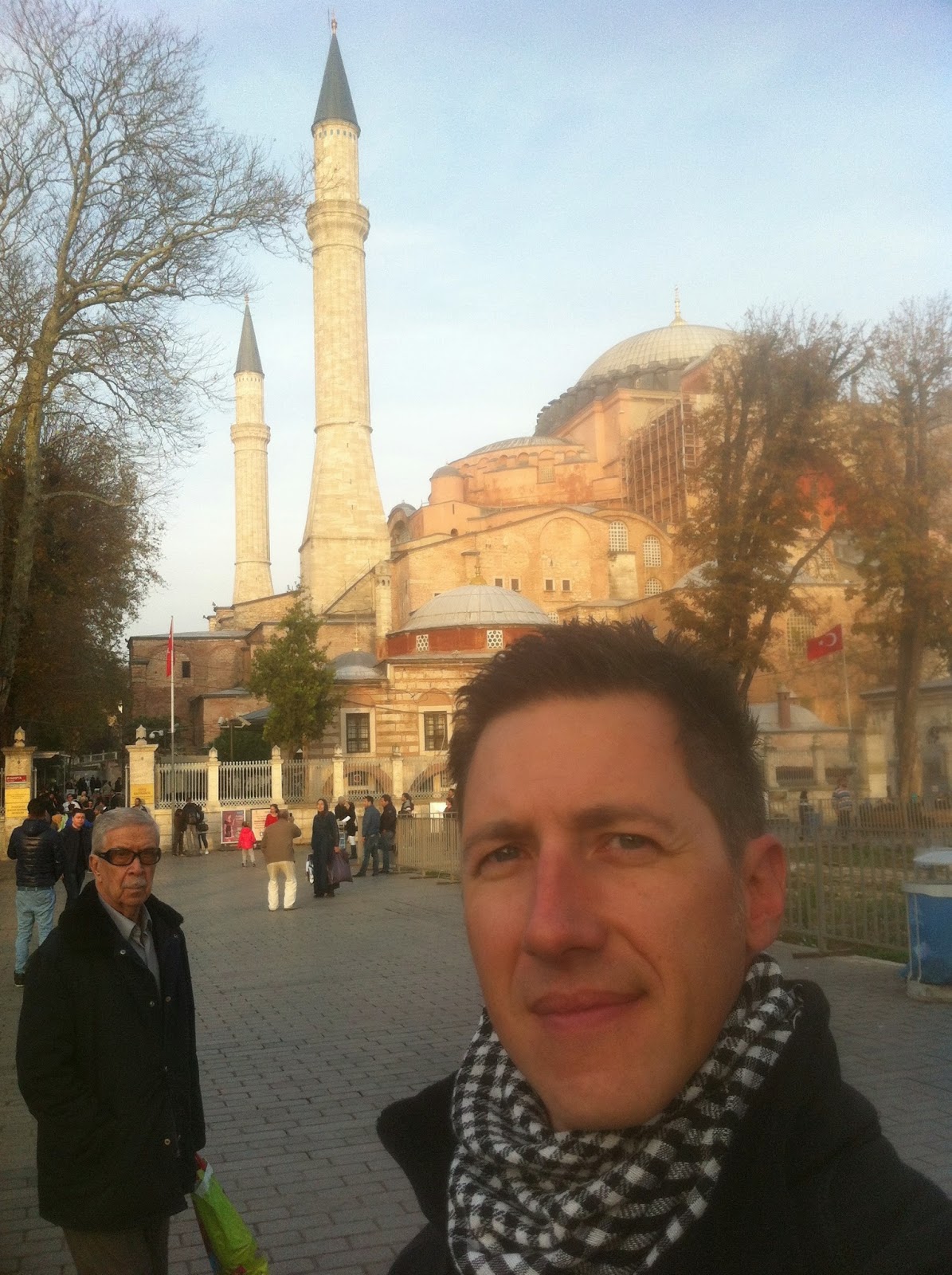 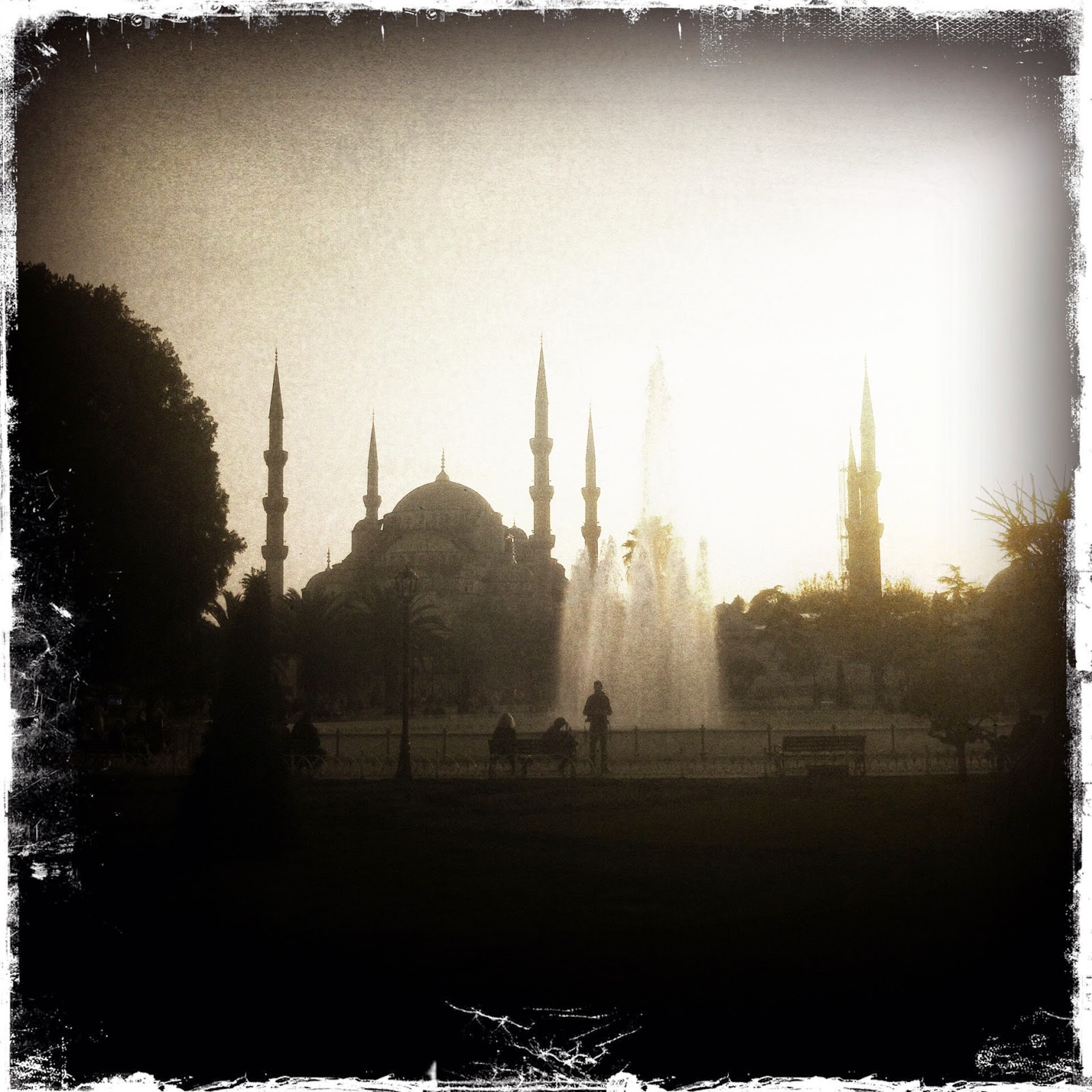 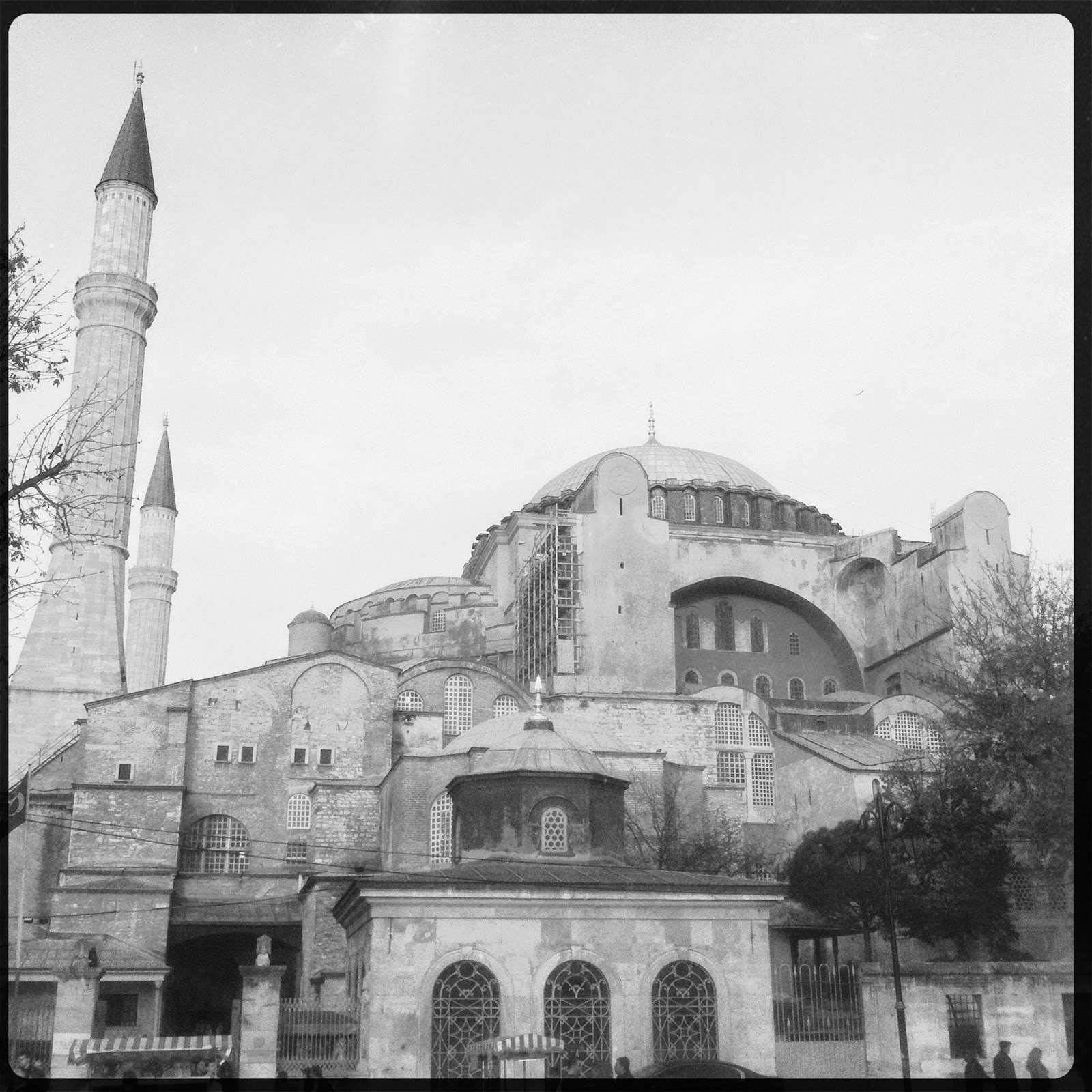 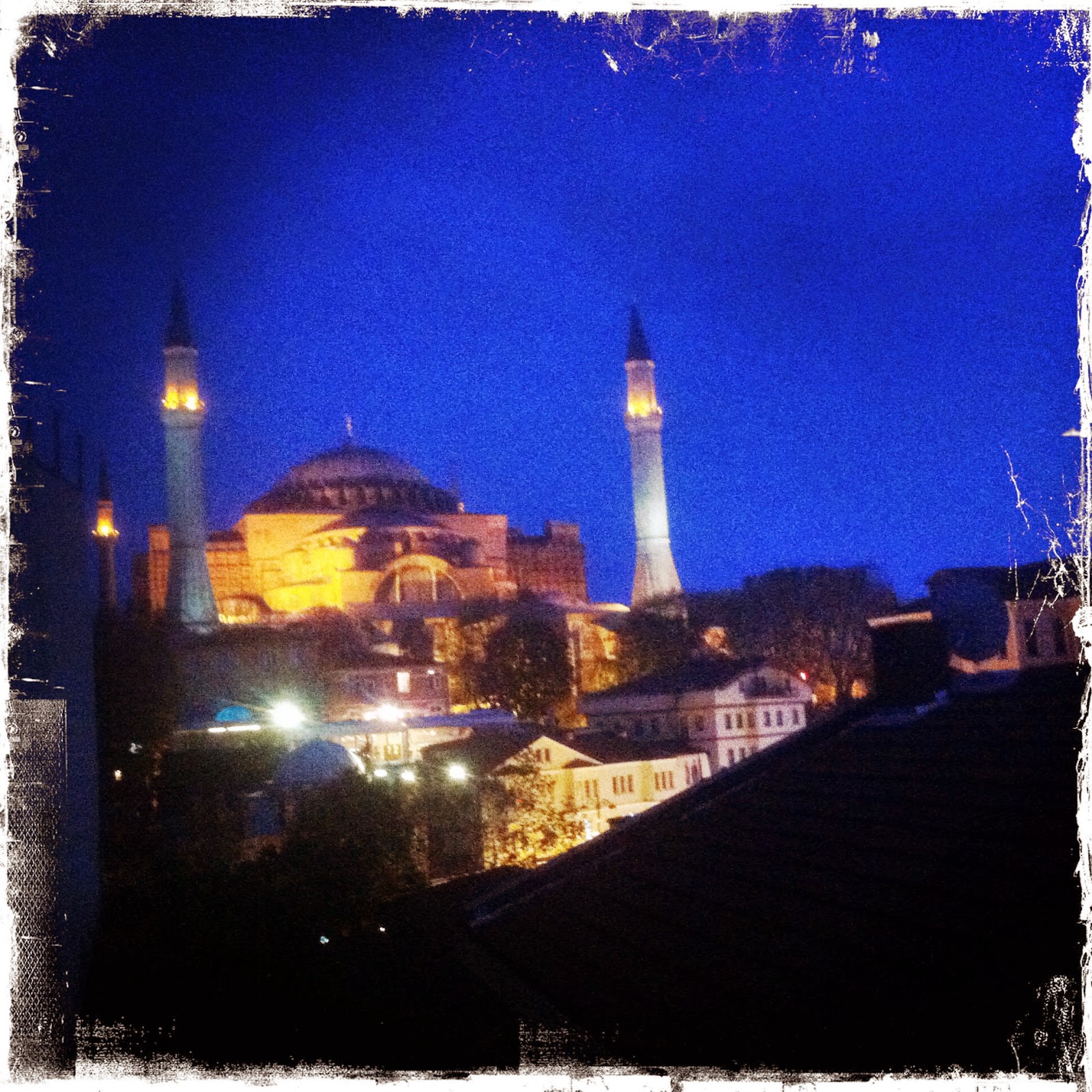 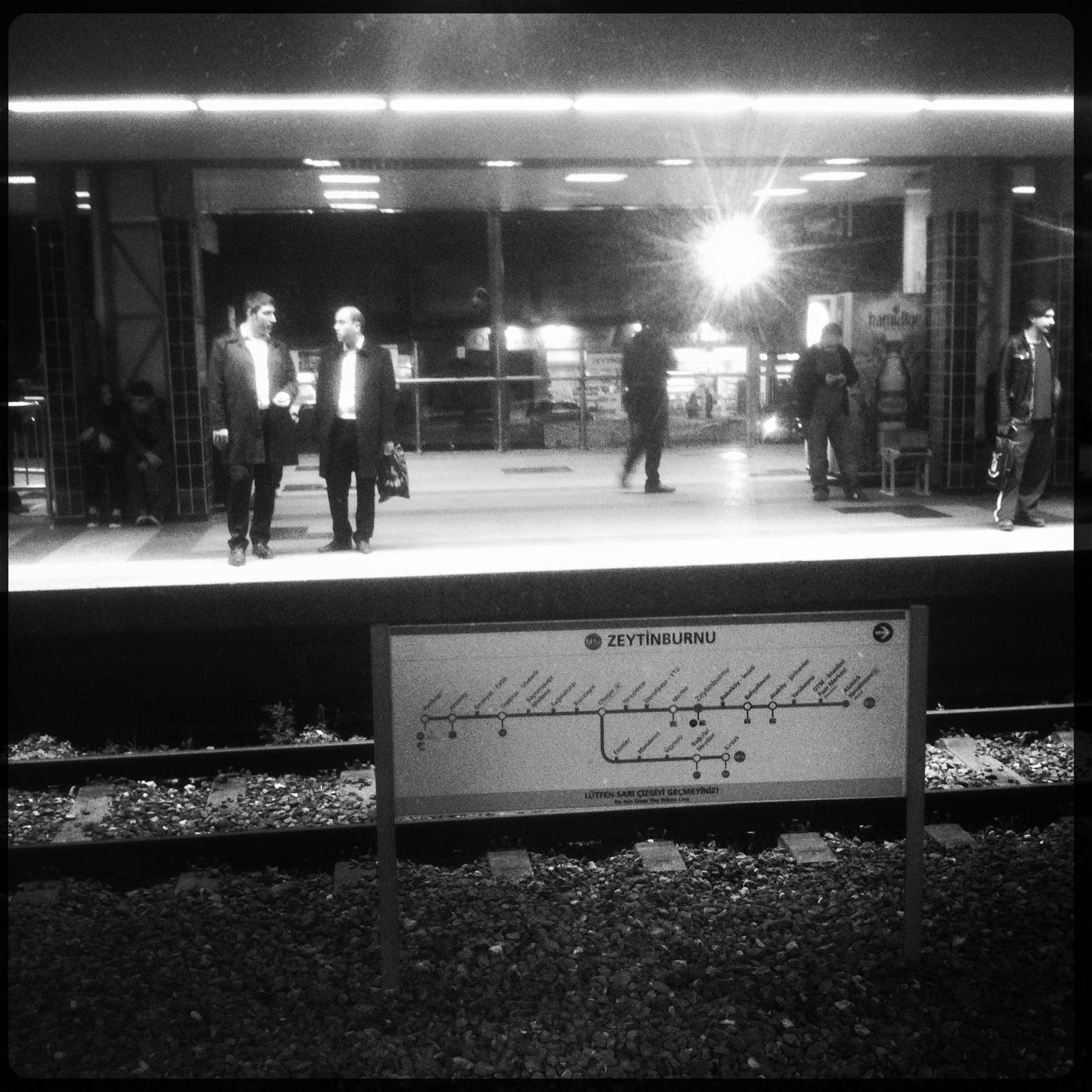 Then the only thing left to do was jump on the tram, transfer to the metro and head into the airport, only to find out that my Kathmandu flight was delayed 4 hours...  time to wander around the airport, take in the scenery and kill time.

My flight finally got off the ground just after midnight.

And that's when it really hit me...  I'm going to Kathmandu!  Bob Seger tribute ringing in my ears...

Bob Seger Live - Going to Kathmandu  -Click the link to rock out!

The flight was uneventful... I was so jazzed I couldn't get to sleep.  I watched "No Country for Old Men" and by the end of that I finally dozed off.  When I woke up, I noticed that we were about to make our decent into Kathmandu. 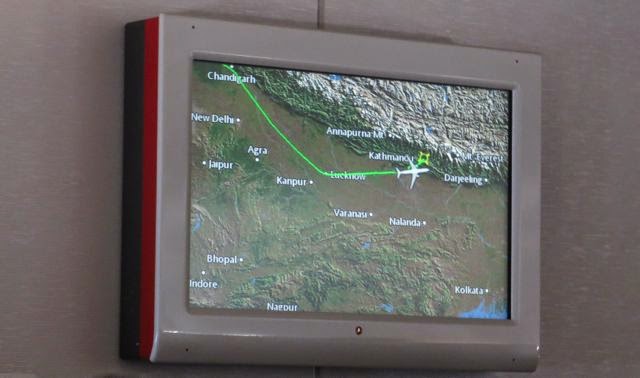 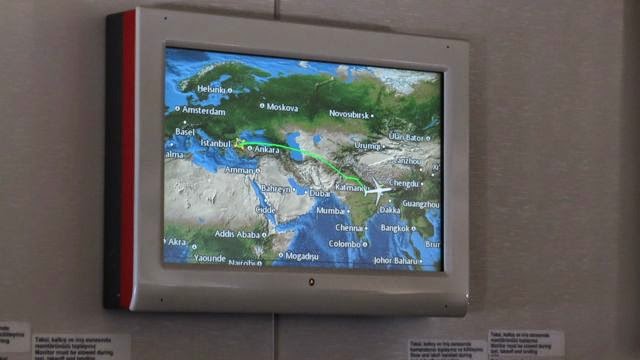 I slid the window shade up to see this: 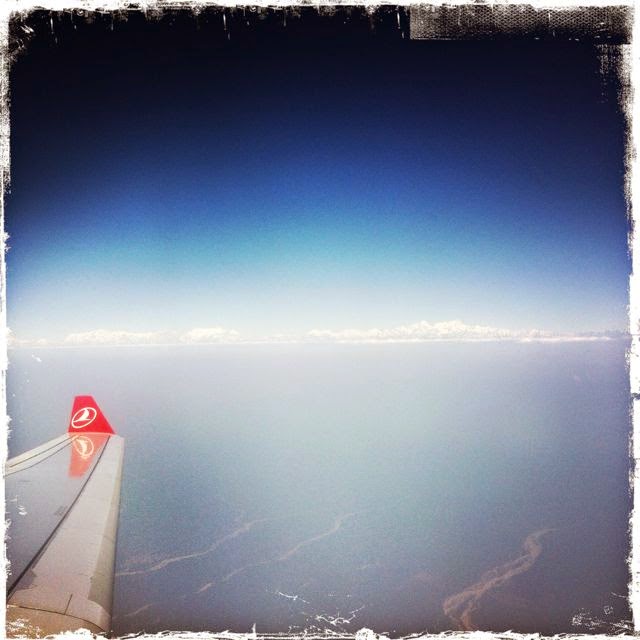 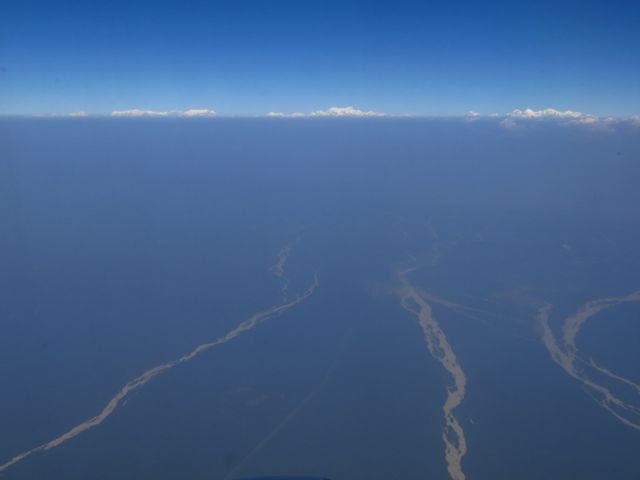 Pretty amazing to lay eyes on the snowy Himalayas for the first time in real life.  It amazed me that the flight monitor said we were at an altitude of 30,000'.  That means we weren't even 1000' higher than the summit of Mt. Everest.  And sure enough felt like I was staring those massive peaks down on the level!

I've been pretty emotional leaving places that have left a mark on me, but this was the first time I was getting a little choked up flying into a place I'd never been before.  These mountains have held my imagination in intrigue for as long as I can remember.  The biggest peaks on our planet, and even though off in the distance, they certainly didn't fail to move me.  Fooking Awesome!

You can see in the third photo that is the dry season.  Those riverbeds must become a raging menace when spring hits and snow starts to melt in the highlands, followed by the beginning of the monsoon. 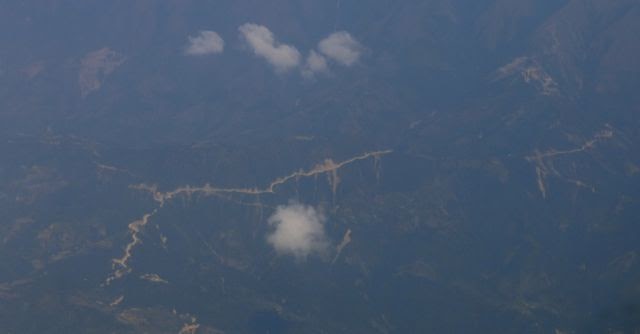 Oh and what have we here?  Yes that is a road.  Getting more and more excited by the minute.  A zigzagging road from the valley up onto a ridge and on and on and on...
At this point, sitting in that plane seat with my face glued to the window, I'm thinking, "I'm never going to want to leave here!"

Everything was pretty chill debarking the plane.  Because my trip originated in Africa, I needed to go through a special Ebola screening and fill out special paperwork.  That was a little weird.  They shot the thermometer gun at my forehead and for a second... I was ready to be like, "it was really hot in that airplane!"  I got a special card with a phone number in case I start to develop Ebola symptoms.  Pretty wild. 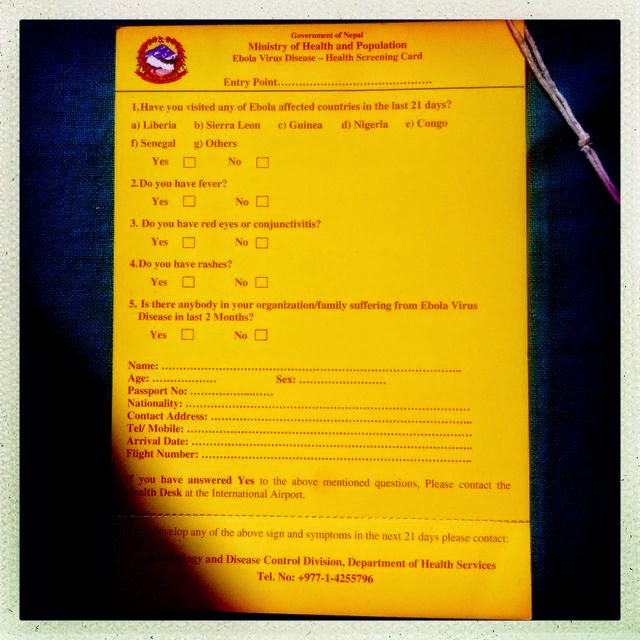 Um no sir... my eyes are always this color.

It took an hour to get through the visa and customs process.  Finally to baggage claim.  My duffel was there.  I was a bit nervous as it was checked all the way from Cairo, which meant it was in limbo during the 20+ hour layover.

I booked a hotel with free airport transfer and sure enough there was a happy little Nepalese man waiting, holding a sign that read "Justin Lee Kleiter" in big black letters.  He greeted me with a smile, the customary Namaste, grabbed my bag, and like a seasoned mountain Sherpa, he through it up on his back and we hoofed it down the road to his minivan. 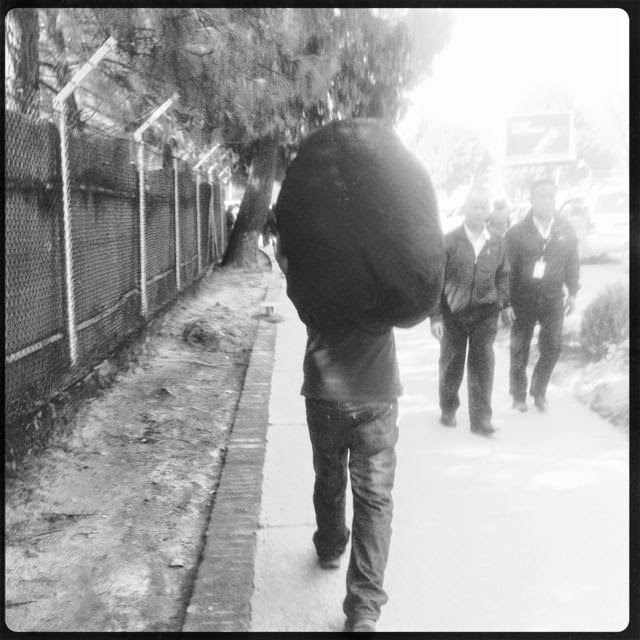 First thing I noticed was that I was getting into the wrong side of the van.  Oh snap, they drive on the left hand side of the road.  This will be interesting.  First time in my life to ride in a country that drives on the "wrong" side!  Traffic seemed similar to Cairo; chaos, honking, painted lines merely a suggestion, pull out in front of oncoming vehicles trusting they will stop for you, etc.  Pretty much everything I've come to know as normal outside of the USA and Canada.  The volume of traffic seemed much more manageable than Cairo and it was surprisingly sunny and warm.  Or was it?  Ebola?  (Yeah I know, not funny.) 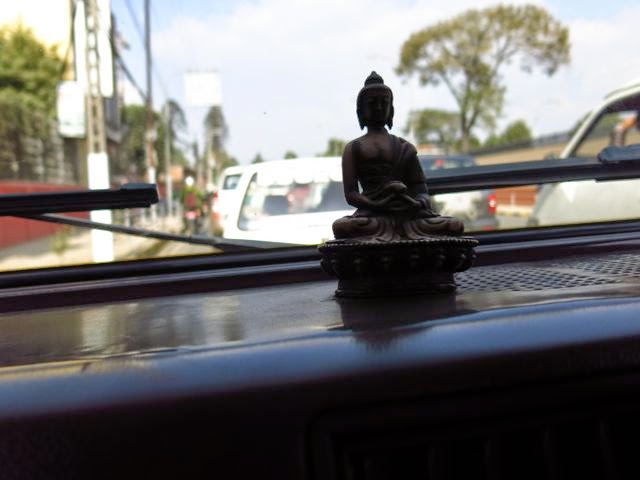 I got settled into my room at the International Guest House, which seemed nice enough.  Took a little nap regardless of the noise in the street and the construction going on next door.  And then got up to go get lost in Thamel District.  I needed to find an ATM; easy.  And a SIM card for my phone; first guys tried to scam me for triple the price.  I got a bad feeling from them so decided to go eat first.

I found a little Tibetan restaurant on the second floor of a building and was the only foreigner in there.  I had some momos, traditional Nepalese dumplings stuffed with pork, and a banana lassi, which is a banana yogurt shake of sorts, and a bowl of mushroom vegetable soup.  Set me back $4.30 USD, which is probably a bit overpriced because I was in Thamel.

Thamel is the backpacker and trekking headquarters of Kathmandu and is the place that most of the tourist hassling takes place.  After the last 3 weeks of touring Egypt, I felt it was downright sleepy.  I found a SIM card with 1.25 GB of 3G Data and 60 min. Voice and a bunch of SMS for 1170 Nepalese Rupees, or $11.70.  And because it is my first month of service it is a bonus plan that is Unlimited Data.  Can you say Americans get screwed by BIG TELECOM!?!

So with that out of the way.  The only thing left to do was get lost.  And that I managed quite well.  All was well when it was light out, but damned if every road didn't look exactly the same in the dark. The hash salesman started popping up and the wanna be tour guides, etc.  But unlike in Egypt, when you tell these guys "No."  They apologize for bothering you and bug out immediately.  Shocking.

Most of the motorcycles I've seen around so far are 125cc Honda Heros and the Yamaha equivalents. I did see a KTM Duke 125cc.  And then I heard the Royal Enfields.  Those 350cc and 500cc single-cylinders produce some quality rumble compared to the buzzing scooters and mini-motos everywhere.  I managed to snap a really obscure photo from the restaurant window of an Enfield that was parked outside. 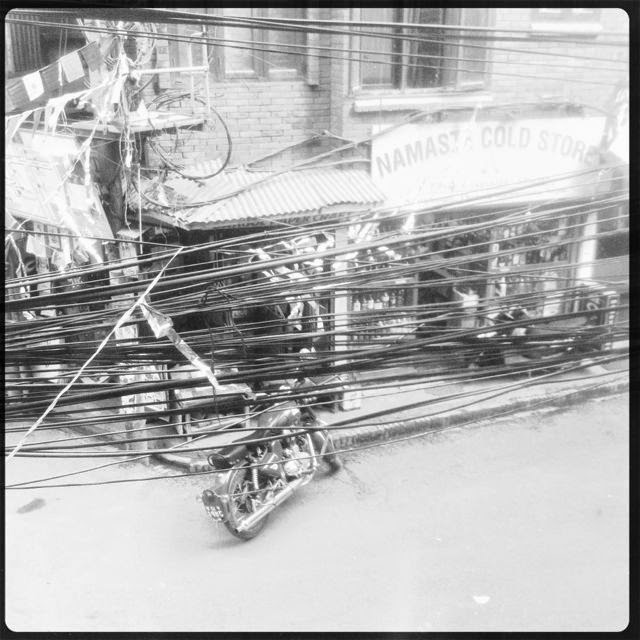 And here are a couple of random shots from my epic fail at navigating Thamel.  It did provide me the opportunity to see some cool stuff, get used to dodging bikes and cars everywhere, even on foot, and gave me the excuse to stop a very pretty Nepalese girl and ask for directions.  Since it was already dark and it took a minute of following to catch up to her, I thought there was no way in hell she'd stop to talk to me.  But she was more than happy to.  Of course I slaughtered every name of where I wanted to get to and she just looked at me dumbly.  I was beginning to think she didn't speak English but then when I said Thamel, she smiled and said, "You need to go straight down there and turn right and keep going up."

I smiled and thanked her graciously, trying to guess her age.  And she sweetly responded, "Welcome" in a light Asian accent.  I think I'm going to like Nepal. 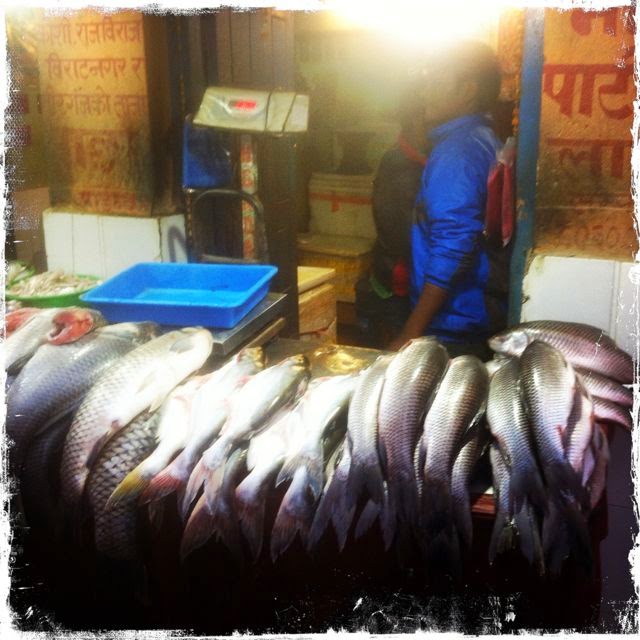 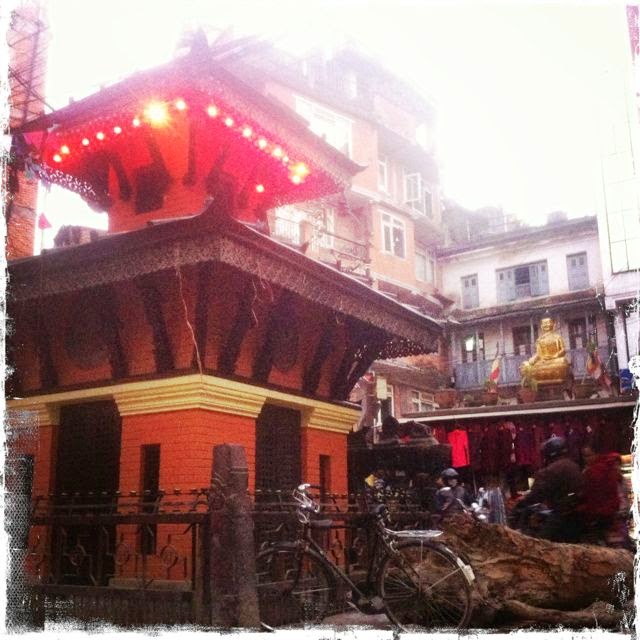 Tomorrow:  Early rise, to try to get my schedule oriented to the sun... It gets dark at 5:30pm, so for moto purposes, I need to get on an early to bed early to rise and ride schedule.

Day 2 Agenda:  Early morning rally to Swayambhunath Stupa overlooking the city and then getting a motorcycle on lock-down.  Let the negotiations begin.  Can't wait to get rolling into the hills!