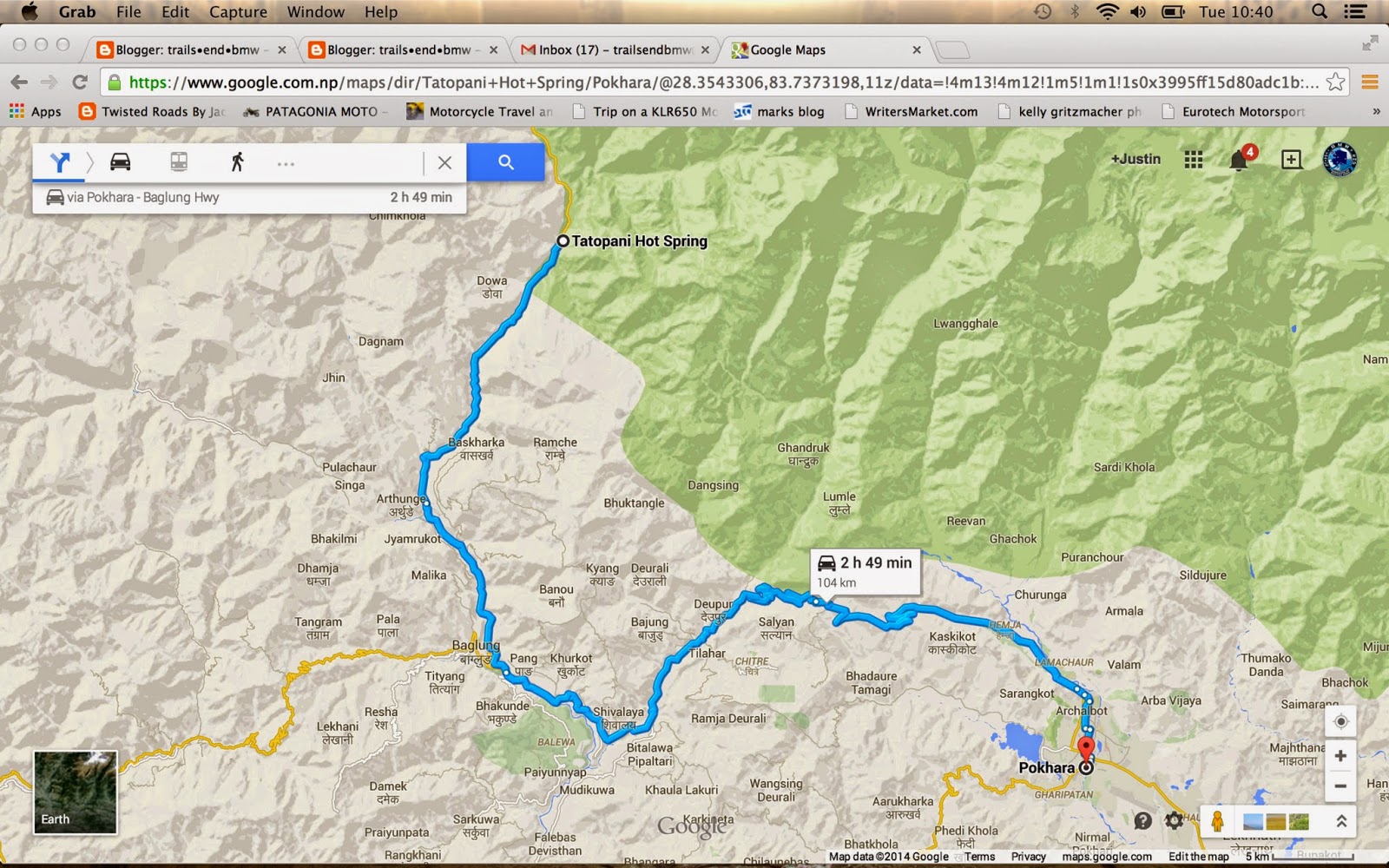 Woke up and had a cup of coffee while calling my family on Skype.  It was good to hear their voices at Thanksgiving Dinner in Minnesota, which was 12 hours behind.  I was enjoying my Friday morning coffee and they were all sitting down to turkey dinner. 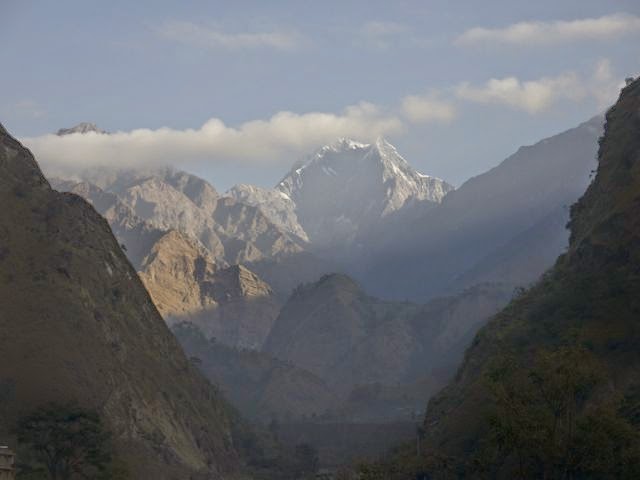 I planned on a 4.5 hour ride back to Pokhara, so I went down to the hot springs and got a couple hour soak.  Two trekkers from Denmark were soaking as well, so I spent some time chatting with them.

When I returned to my room, I realized that I’d forgotten to lock my room, but thank god everything was still there.  That would have been a real blow.  I packed up my belongings and loaded up the bike.

I had a simple lunch of mushroom soup and garlic bread with Mette and Camilla, my new friends from Denmark.  Camilla has been working in Nepal with an INGO for the last year and a half and speaks Nepali, which throws off all the locals, with her white skin and red hair.

I was feeling really relaxed after the long soak in the hot springs.  Tatopani is low enough in elevation that there were citrus trees growing in the garden and the raging rapids of the Kali Gandaki river were the backdrop soundtrack to the gentle breeze blowing through the leaves.  The sun was burning through the clouds and the temps were great. 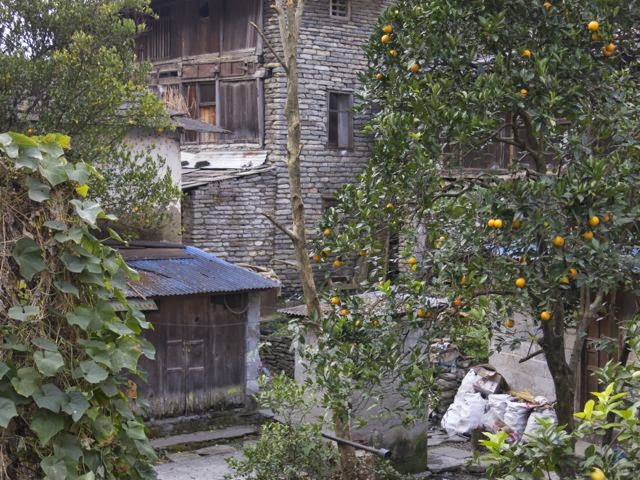 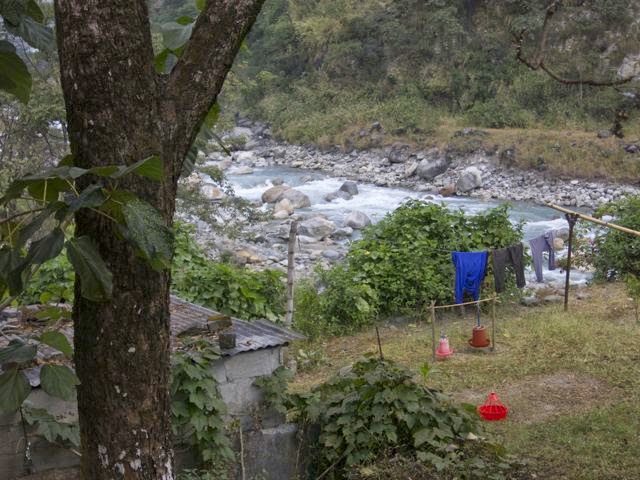 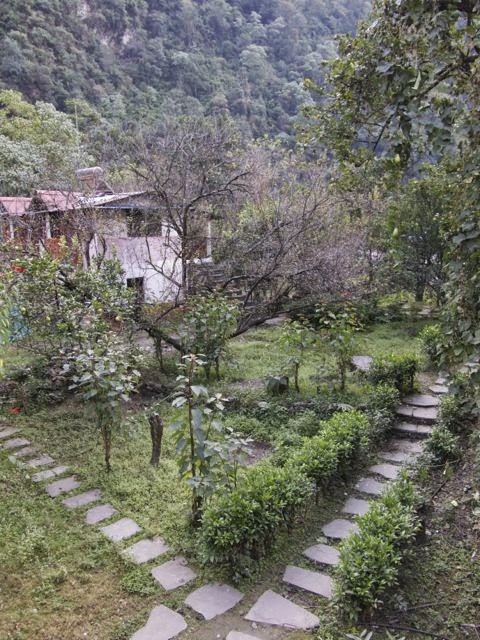 I had a really hard time deciding to leave Tatopani.  This is the really challenging part about having a rental bike.  At roughly $50/day, it is hard to just take a day off from riding.  My cost of living, other than fuel, so food and lodging runs between $10 - 15 per day.  So the bike is by far my biggest expense.  I thought about how nice it would be to chill out in the garden and catch up on my blog posts and almost stayed.

If the bike hadn’t been loaded up already, I probably would have. 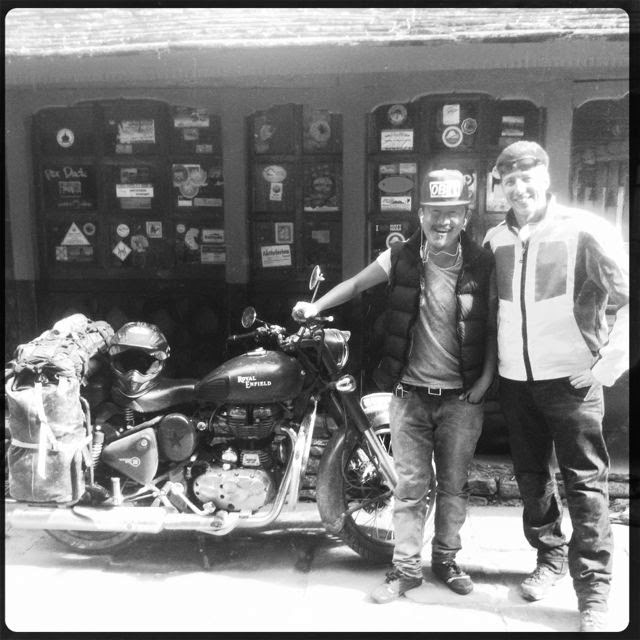 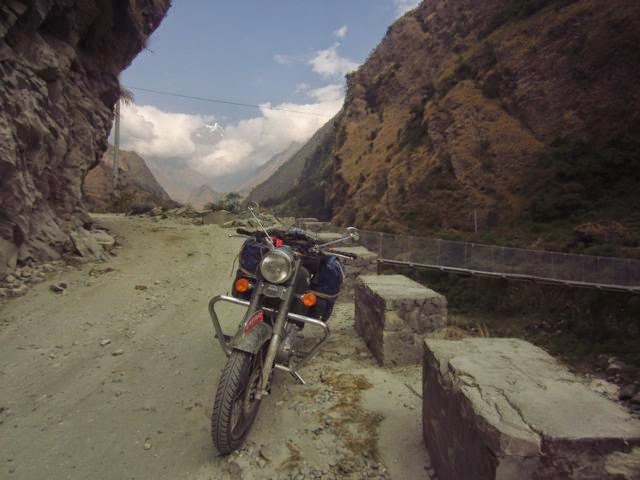 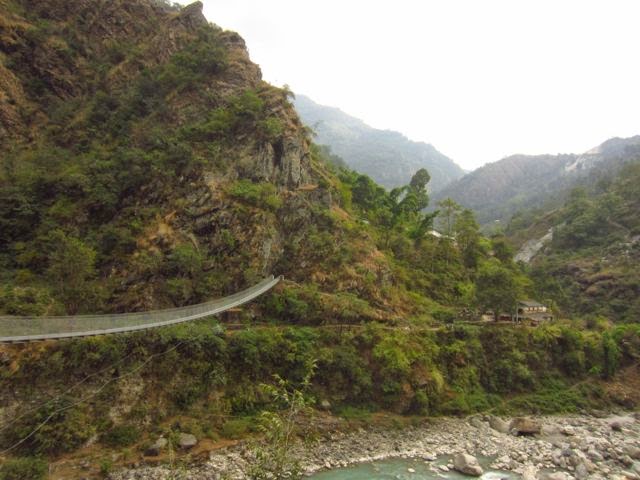 The road between Tatopani and Beni was horrible.  My back was over it.  I almost turned back for Tatopani and decided to leave it up to a coin toss.  Heads I turn back, Tails I ride on to Pokhara… tails it was.  I suffered the first gear bumping and bouncing for another hour and a half until I reached Beni.

Pulling up to the petrol pump, with trucks and tractors and busses and jeeps everywhere, I realized that I’d just arrived back in civilization.  For the last 4 days, I’d been in the backcountry Shangri-La of the Annapurna Conservation Area and now I was thinking I should just turn around and head right back in. 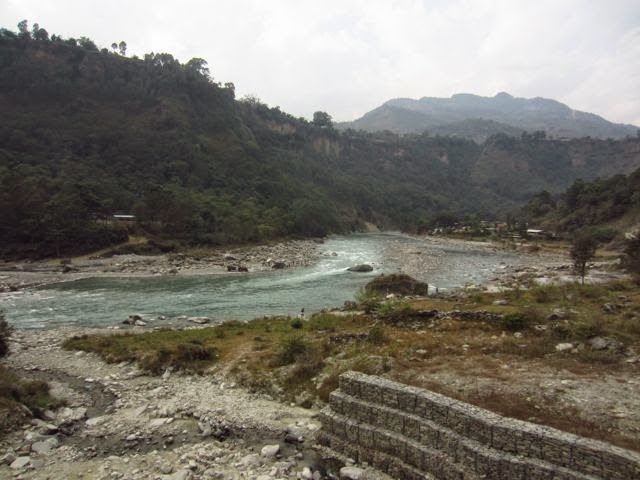 Instead I rolled across the bridge over the Kali Gandaki and started my way to Pokhara.  The asphalt was broken and bad but I never thought I could be so happy to get back to pavement.  My speeds jumped from 15 kph tops on the rough road from Tatopani to 40-60 kph watching for the many missing sections of pavement and of course the oncoming trucks and busses. 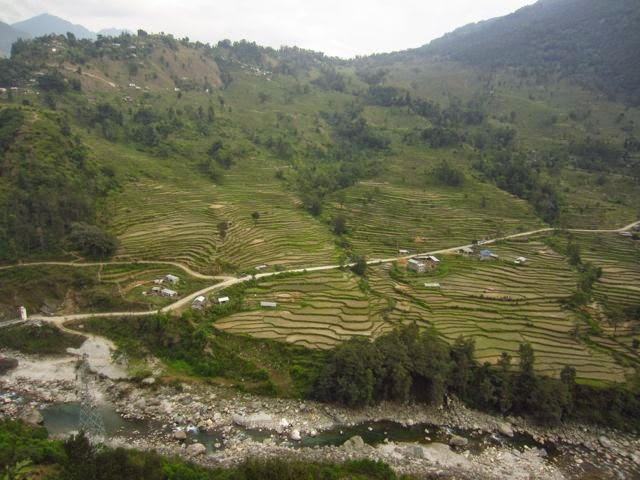 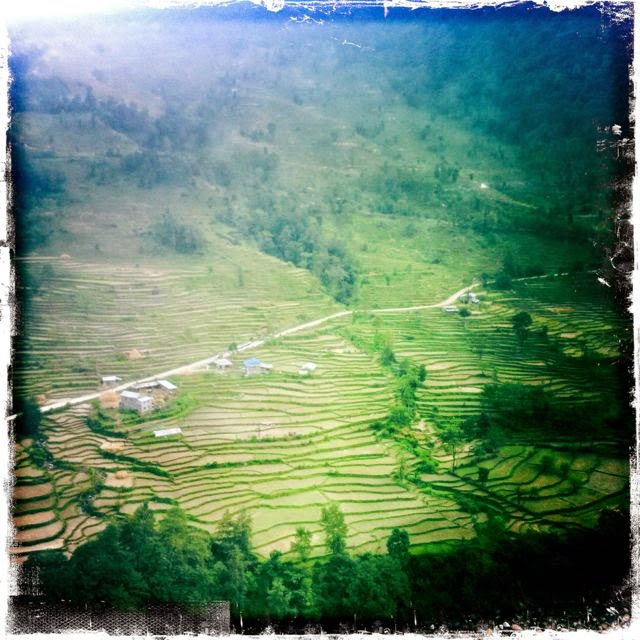 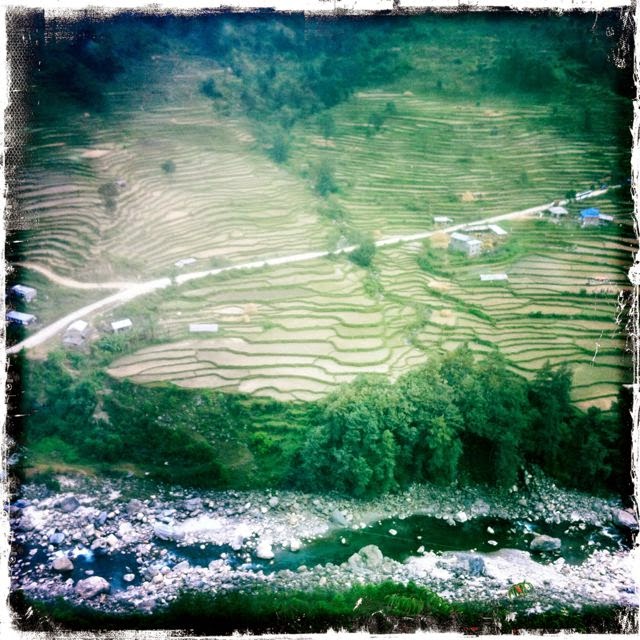 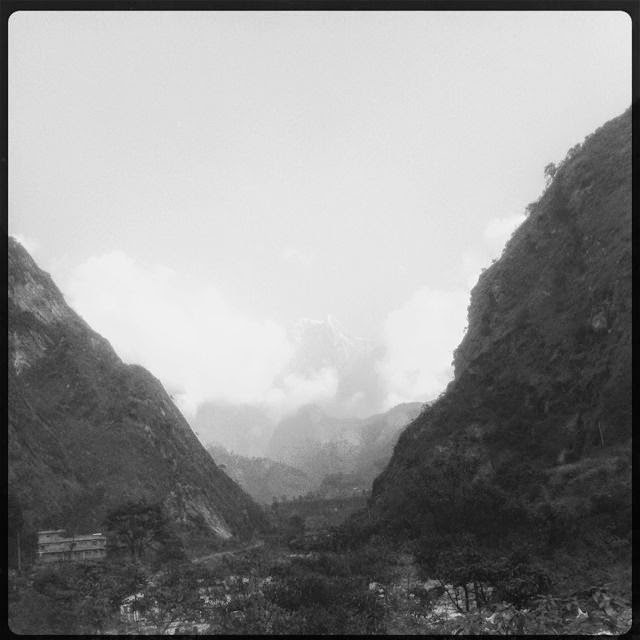 I soaked up the wonderful scenery, even though the clouds were building in intensity the closer I got to Pokhara.  I climbed over the pass again.  It was cold, but I knew this time that it would be short lived and pushed on.

I rolled into the same little Placid Guest House on the north end of Pokhara and was greeted by the little old lady, who quickly called for Divia to come speak English with me.  Divia told me that there was a room with a bathroom this time for $6/night.

Divia’s smile is infectious and I suddenly felt very happy to be back in Pokhara and a familiar place. 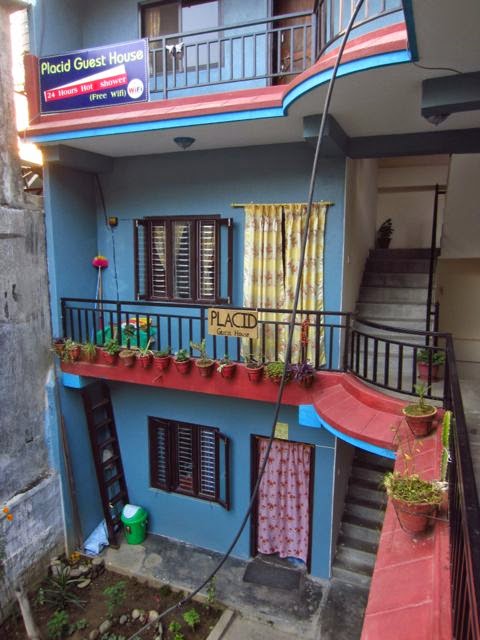 I unpacked, showered and headed out to meet up with Adrien and Tara from Australia for dinner.  I’d met them at the BikeMandu when we were both picking up our rental bikes.  I told them about the conditions to Tatopani and beyond and we had a great meal at a little second floor restaurant overlooking the lake.
Posted by trails•end•bmw at 9:16 PM