Great breakfast along the lake and then it was game time.  I tried Raju and got ahold of him on the first try.  He said he had some options for dirt bikes and that I should come by his shop, Bullet Basecamp & Surgery after noon.

He said that he had two options for bikes that I might be interested in and I should come by and we could work out the details.  Perfect.  This was exactly the break I needed.  I crossed my fingers and hoped that the bikes would be decent and the rates would be fair.  Now I just needed to do some further packing.   I want to go as light as I can on this trip.  It will still require some gear though.  If I make it to Manang, I'll be up over 4500 meters (14,750'), so I'll still need to be carrying a sleeping bag, liner, extra socks, jacket liner and 300 wt. fleece, down jacket, small first aid kit, and all my camera gear.   The plan is to stash another small bag at the guesthouse.  I made my mental list and my physical piles of what would go and what would stay.

I had a pretty good idea that I'd be able to do it with one waterproof duffle lashed to the seat and wear my backpack, hopefully with very little in it.  I'm not a huge fan of wearing a backpack while riding.  I'd rather have everything strapped to the bike, like on the Enfield, but I was already planning to have to wear the pack.

I headed off in a light jog for Bullet Basecamp and my meeting with Raju.  Little did I know that all the pieces that would need to fall together today would have me jogging nearly 10km's by the time I was done... 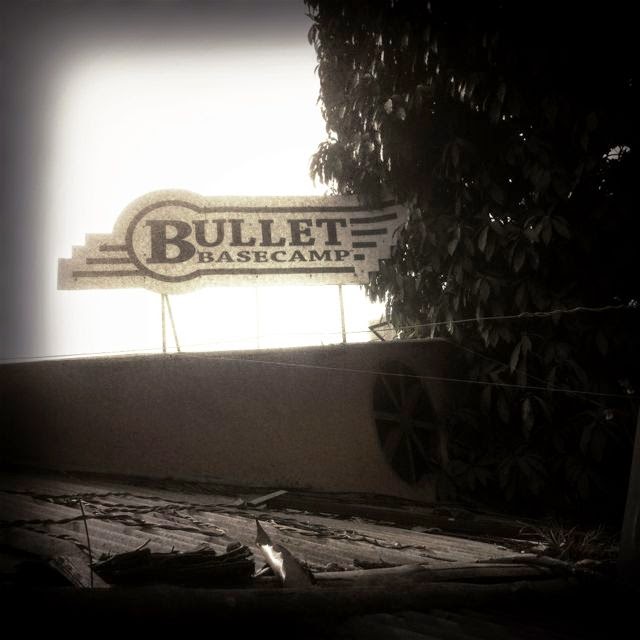 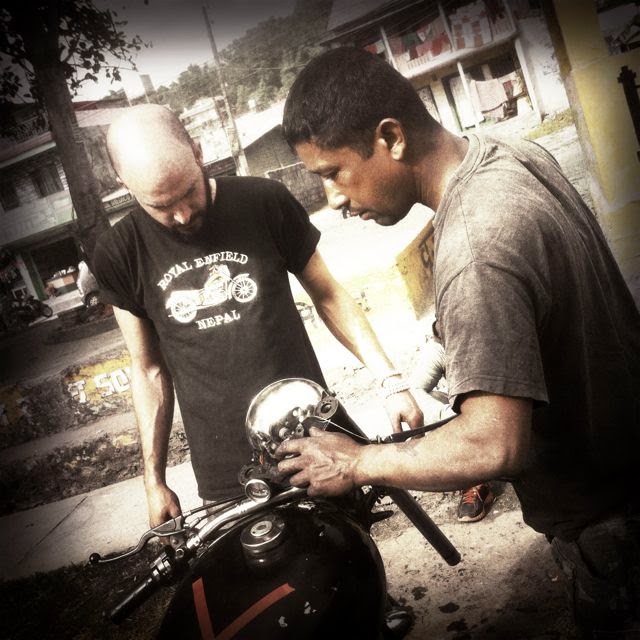 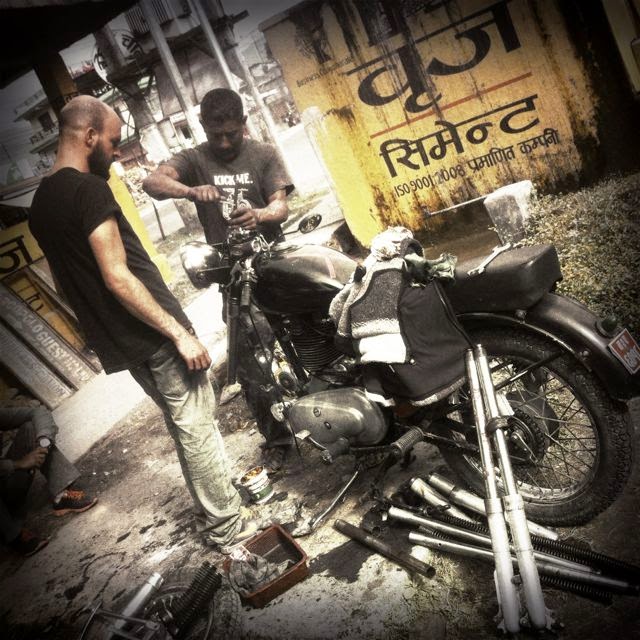 I got to Bullet Basecamp around 12:30pm and found Raju and G. from Holland hard at work on G.'s vintage Royal Enfield.  He is getting it up to spec to take on an overland tour from Nepal back to Holland.

Raju took a minute to have tea and talk to me about dirtbikes.  The two options he had for me were an old, maybe mid-'90's Yamaha XT225 Serow or a 1985 Honda XR350R.  I test rode the Yamaha.  I was unimpressed.  The front suspension felt shot.  It had spring to it but the compression/rebound damping felt non-existent.

When I returned to the shop and inquired about test riding the Honda, I got a little bit of attitude out of Raju.  I took into account that he had his hands full with G.'s Royal Enfield project.  I also took into account how many people must come talk to him about rental bikes and are just blowing smoke.  Raju's Bullet Basecamp is in the Lonely Planet as a popping bar and restaurant as well as moto shop.  I didn't get the full story but the bar and restaurant weren't functioning while I was in Pokhara.

Regardless, Raju's answer was that it was possible to get the Honda to the shop, but only if I was 100% that I wanted to rent it.  And NO DISCOUNTS.  Ok. Ok.  I get it.  Never mind the Honda then.  I'll see you at 5pm to pick up the Yamaha.

I started another jog at this point back to Mintz Cafe to have a cup with Audrey, a French-Canadian trekker I met up in Tatopani.  She gave me all the details I needed to find the ACAP permit desk... conveniently located clear across town in Damside.  I thanked Audrey for the info.  Chugged my coffee and was off for another jog to Damside and the Pokhara Tourism Office TIMS/ACAP Permit Desks.

I was working up a nice sweat and honestly, I'd not really gotten my blood pressure up over much these days.  The occasional push of the Enfield at high elevation but no real exercise to speak of.  Jogging around Pokhara, even though it drew a lot of funny looks from the locals in the backstreets I was running through, felt great.

I got my ACAP Permit sorted without a problem.  When they asked to see my TIMS card and I showed them the receipt from Tatopani, they were confused as to how I could have gone through the West side of the Annapurnas without getting an ACAP then.  I mumbled, smiled a lot, cracked some jokes...  I left out the story about how Karma already kicked my ass with my lost camera and that somehow I'd already paid my karmic debt for not having a permit for the first leg of the trip.  The gods obliged and took care of the details...  Staple, staple, stamp, stamp, stamp.  Have a great trip.

The permit guy was friendly.  This helped.  And I was wondering what they'd say when I filled in Motorbiking as my activity.  He said, "Good Luck.  The road's not finished, I think you only go Chame."  That was ok.  Everybody has an idea of how far I can go.  My idea: go find out.

I jogged back across town.  Showered up.  Blogged.  And jogged back to Bullet Basecamp.  It was beer-thirty now.  Everyone was happy.  Raju and G. were there and two other guys, who I eventually came to know as Matt and Ian.  Matt is the infamous owner/operator of Hearts & Tears Motorcycle Club in Pokhara.  He offers tours and rentals of Royal Enfields.  We talked at length about the trip into Upper Mustang.  He did a recon run there last year and this April (2015) will take an expedition with film crew up to Lo Manthang.  It was really exciting to talk about the options to coordinating the Nepali guide, securing permits, condition of road...

Ian had a load of great information on the Manang side from my hiking treks in the area, but no one had any information on the motorcycling condition of what I was about to attempt.  They just said, "Good Luck. " and "can't wait to hear how it goes up there."

In our conversation Raju picked up that I work in a dealership and that we sell Harley-Davidson, BMW,  and Honda Motorcycles... I think he started feeling bad about not bringing the XR around for me to test ride.  He demanded that I come by at 8am and check it out at least.  He's had complaints that it pulls to the left and would like my opinion. 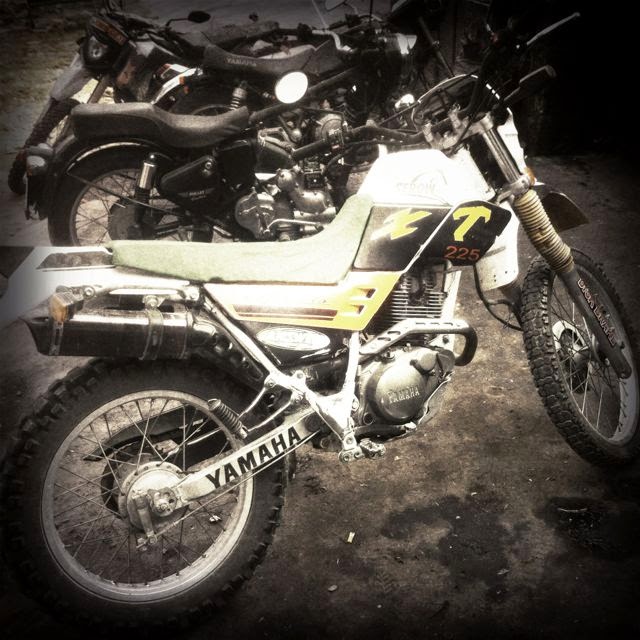 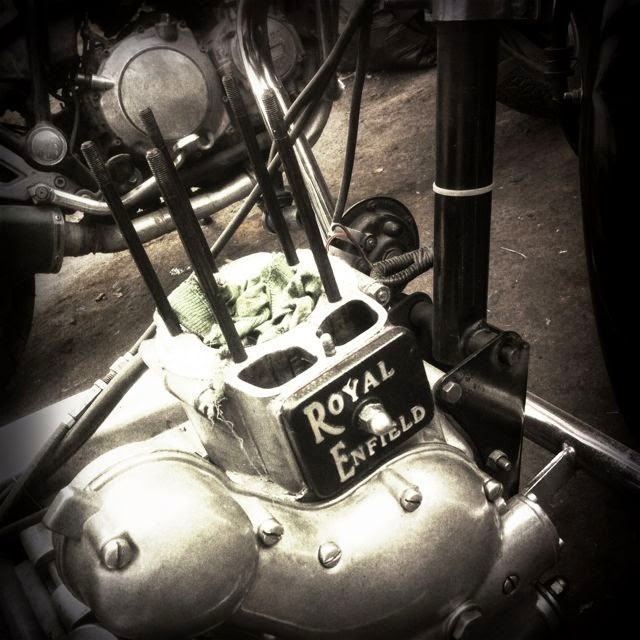 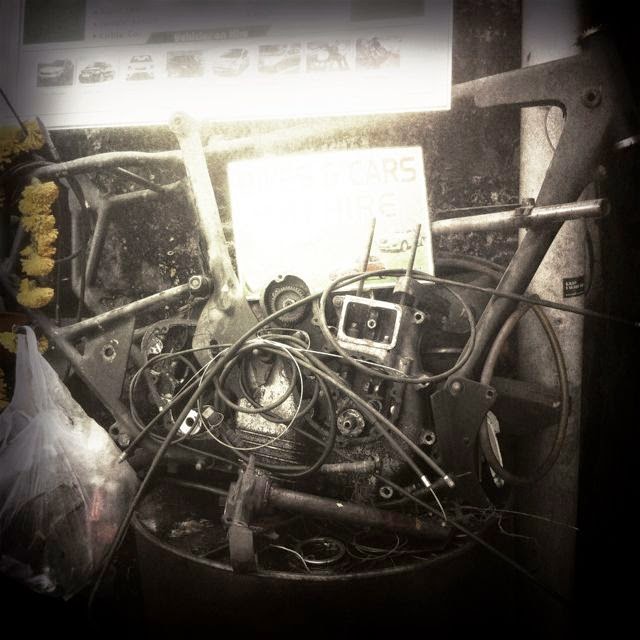 I rode the Yamaha to Placid Guesthouse figuring I'd made the ok choice.  It all came down to money again.  $20/day on the Yamaha or $35/day on the vintage Honda XR.  It was a killer.  I'd chosen to spend more money on the nicer Royal Enfield 500EFI Classic,  which amounted to over double the price I would have spent on the 350 Classic.  Having the 500EFI certainly proved worthwhile.  It was new and gave me zero issues other than the clutch cable.  But the budget shock of a cool $700USD for 14 days was playing a heavy role in my accepting the Yamaha.

Anyone who knows me well, knows that I'm really not a Yamaha fan.  Of the big Jap 4, Yamaha just always ranks lowest for me.  I don't even know why really.  They make fine motorcycles and occasionally put something on the market that sets a trend, but rarely.  I just find Yamaha unexciting.  I grew up on a Suzuki, which was ok.  But I had a Honda ATC110 three-wheeler as a kid too, and that machine always started on the first pull of the recoil rope.  As a kid that only wanted to ride, that Honda's reliability and ease of use, left a lasting impression in my mind.  So making the budget choice on the Yamaha wasn't easy, nor was it a choice I was completely comfortable with.

I met up with Audrey for Django Unchained at the open-air cinema & cafe on the hill overlooking Lakeside.  Another great evening at the cinema with good company.  Early to bed again... I wanted to hit the road early. 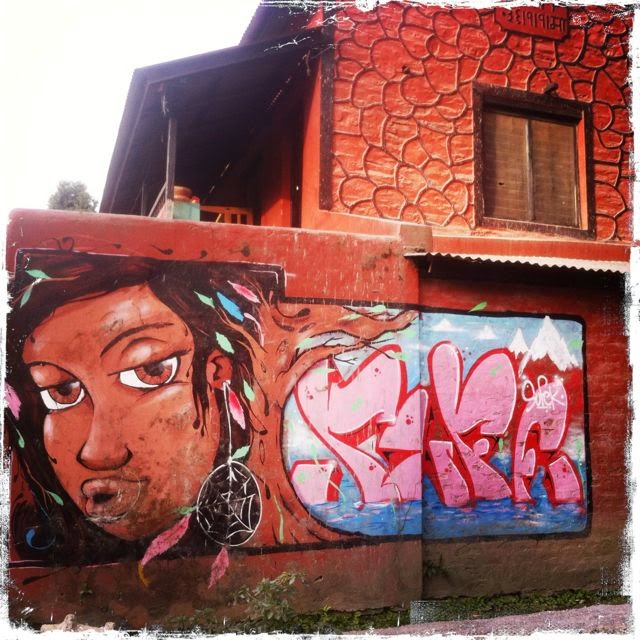 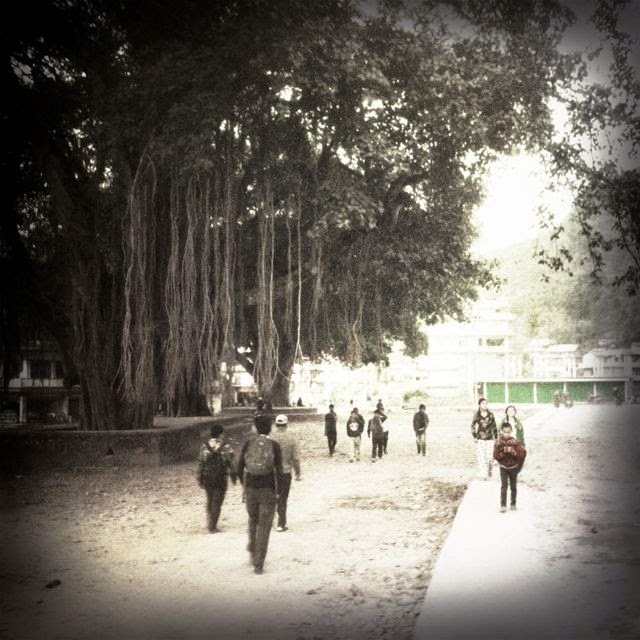 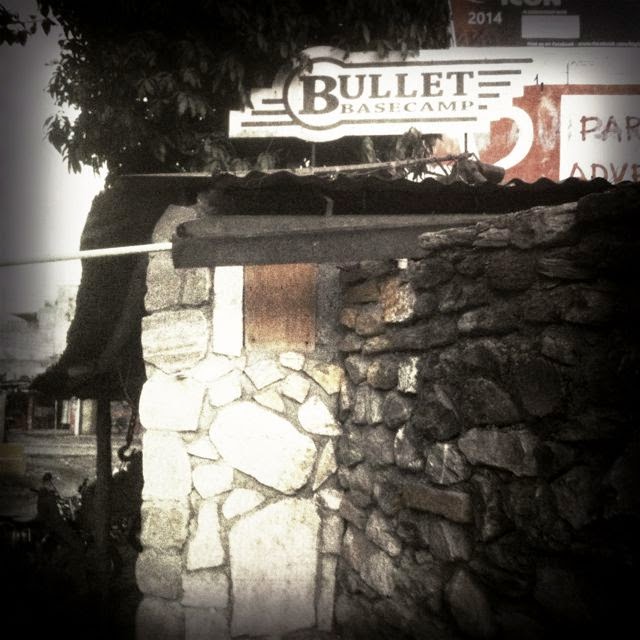