Day 22... Into the Annapurna Conservation Area... Turture to Dharapani.

Life starts early in Nepal... Well the resident rooster decided to roost right outside my window and come 5:30am, he was sure that his calling in life was to let everyone in town know his existence.

I was ready to get up and get packed anyway.  I slept ok in the filthy room but I barely fit on the bed.  I needed to sleep diagonally because the headboard and footboard were spaced for Nepali sized humans... and I'm not even a tall guy by Western standards.

The little shop slash kitchen of the guesthouse was a bustle activity.  Nepalis who had stayed the night were preparing for the day.  Eating breakfast, drinking tea and coffee, and trying to stay warm.  There was a thick fog and mist about.  Without the sun breaking through a moist chill had set in.  I was a little disappointed sitting there waiting for Raju.  I was thinking about how yesterday was sunny and gorgeous and that could have been my weather window.  I tried not to let it get into my head.  I tried to stay present.

I had a cup of tea and chatted with the local guys who were also hesitant to get on with their day on this chilly morning.  Raju called and said that he and G. and another rider were on their way but that it was freezing and they'd stopped of for tea.  He expected to arrive around 10:30.  I knew this probably meant 11am or maybe even a little later.  Simply because I know how it goes trying to get somewhere on a bike when you're freezing.

I was getting anxious to get going.  Yet with the mist and fog, I decided to dig in and be patient.  I had a cup of coffee and watched the rooster who'd woken me for the day, strut around and flap his wings at the hens.

Raju arrived with G. and an Australian named Dan.  They pulled up shortly after 11.  We sat down to some tea and masala eggs.  The guys were freezing.  After wolfing down some breakfast and tea, I started figuring out how to load up the XR350R.  There were no grab rails on the rear of the bike, so I was unsure how I would secure my gear.  I managed to slip the nylon straps between the fender and the subframe.

Dan and G. were heading all the way to Kathmandu, so after a few more cups of tea, they saddled up just as the sun burned through the mist.  Finally a good sign.

Raju had his work cut out for him with the Yamaha.  Dan and G. peeled off and after a quick chat over details of the bike switch, I headed off in the other direction... Up.

I was stoked the sun had come out.  I put on some tunes on my iPod and kicked the big Honda over.  The deep rich rumble of the 353cc single-cylinder motor pushing through the Supertrapp Exhaust put a smile on my face.  I took off heading toward the now glistening mountains. 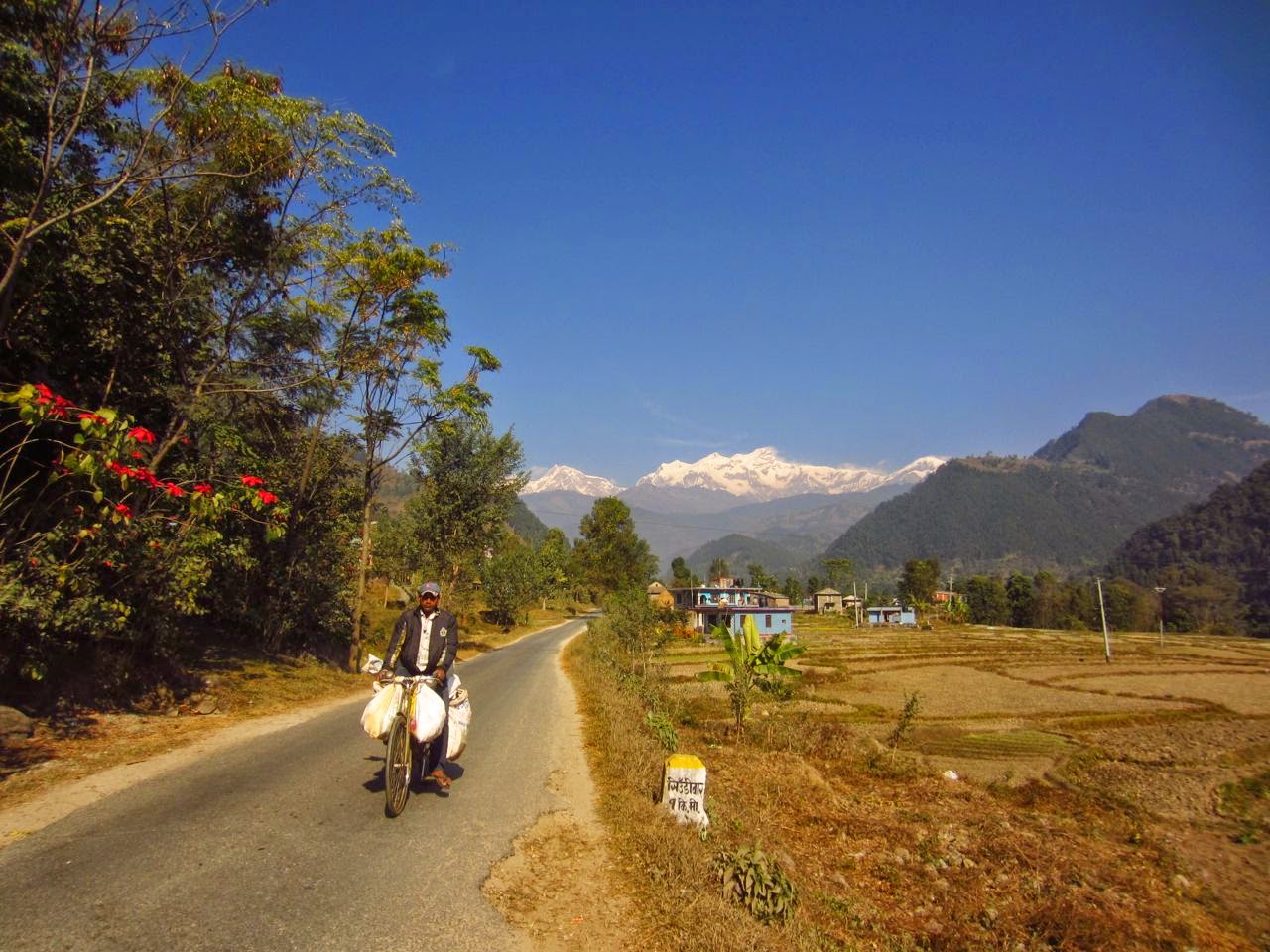 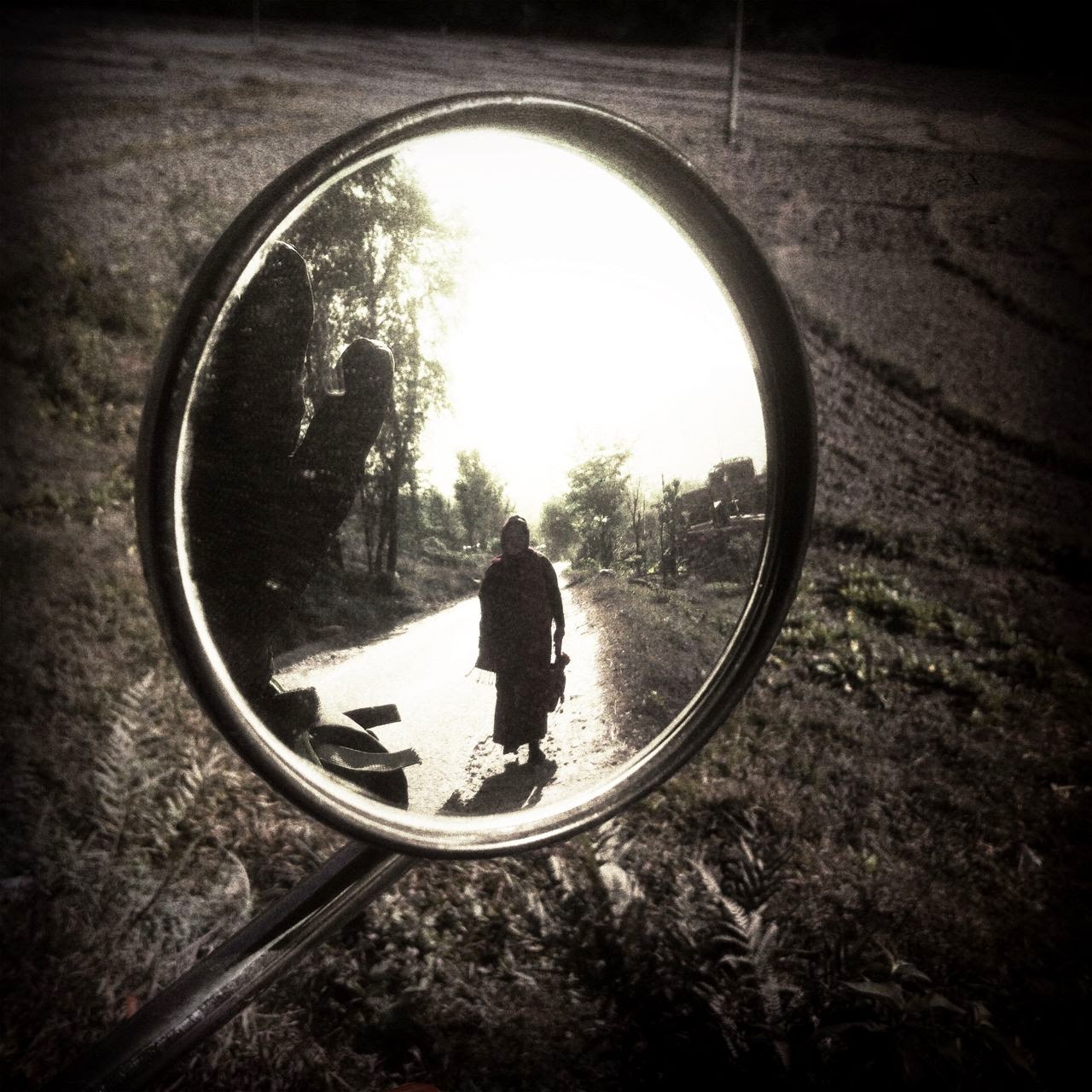 I was only about 30 km's from Besisahar at this point.  So far I'd been told this will be my last option for fuel.  It took a few minutes but I finally found the petrol.  I rode around asking everyone where the petrol pump was and everyone shook their head.  Finally a young girl heard me asking a man where I could get petrol.  She came up and pointed shyly down the road.  Then she lead me to this pretty shop keeper, who was very happy to sell me petrol in repurposed plastic water bottles, one liter at a time. 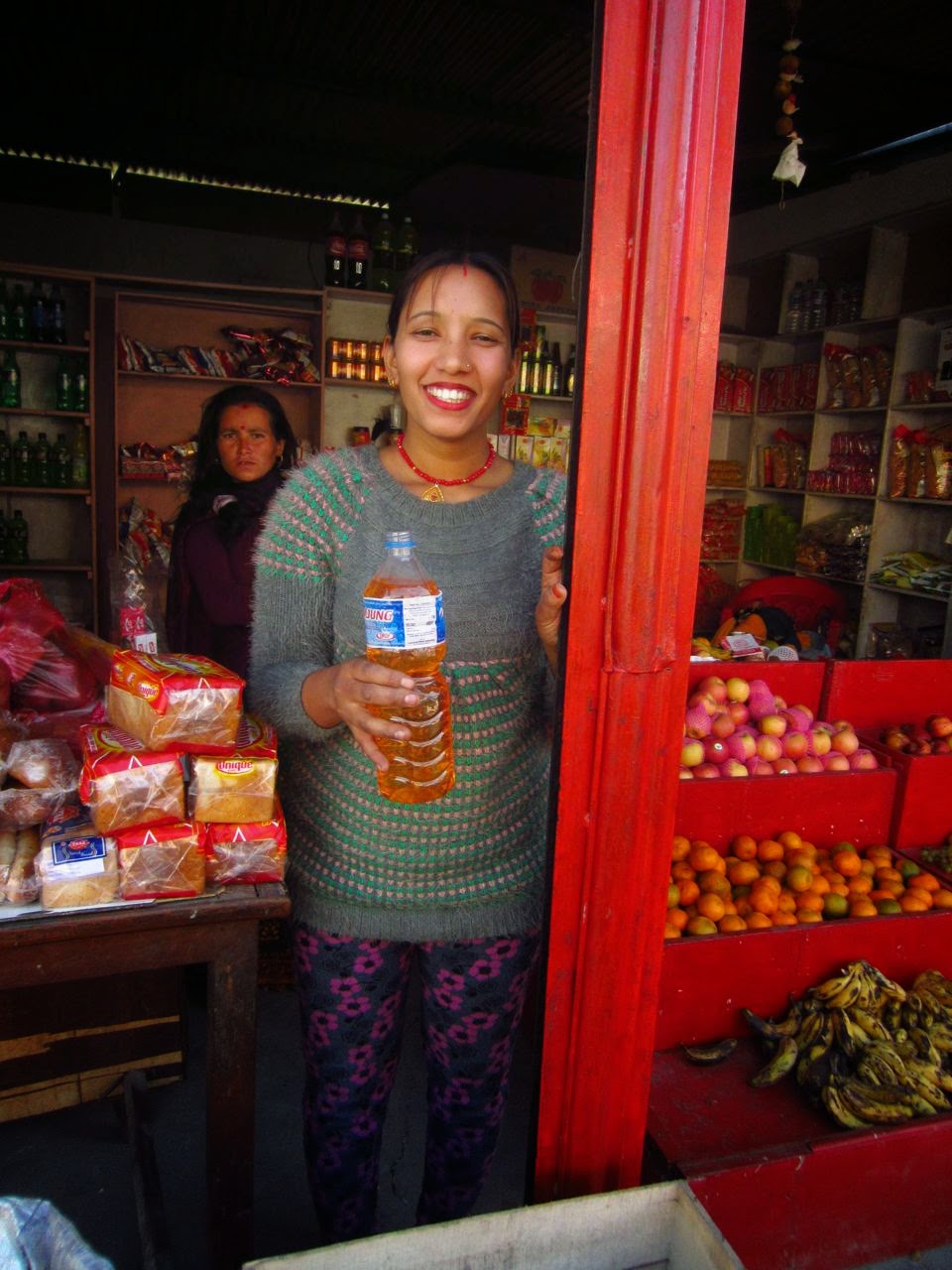 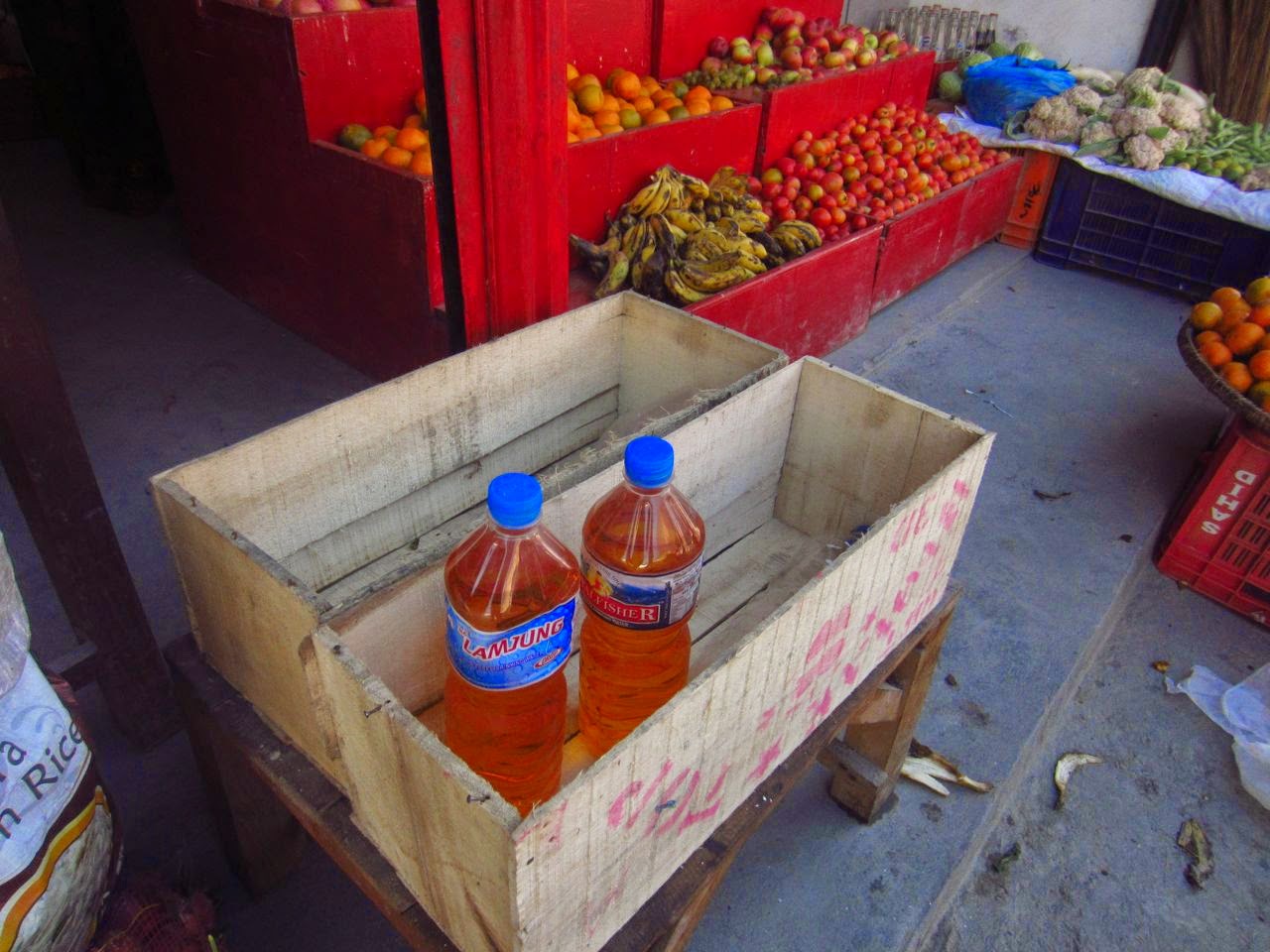 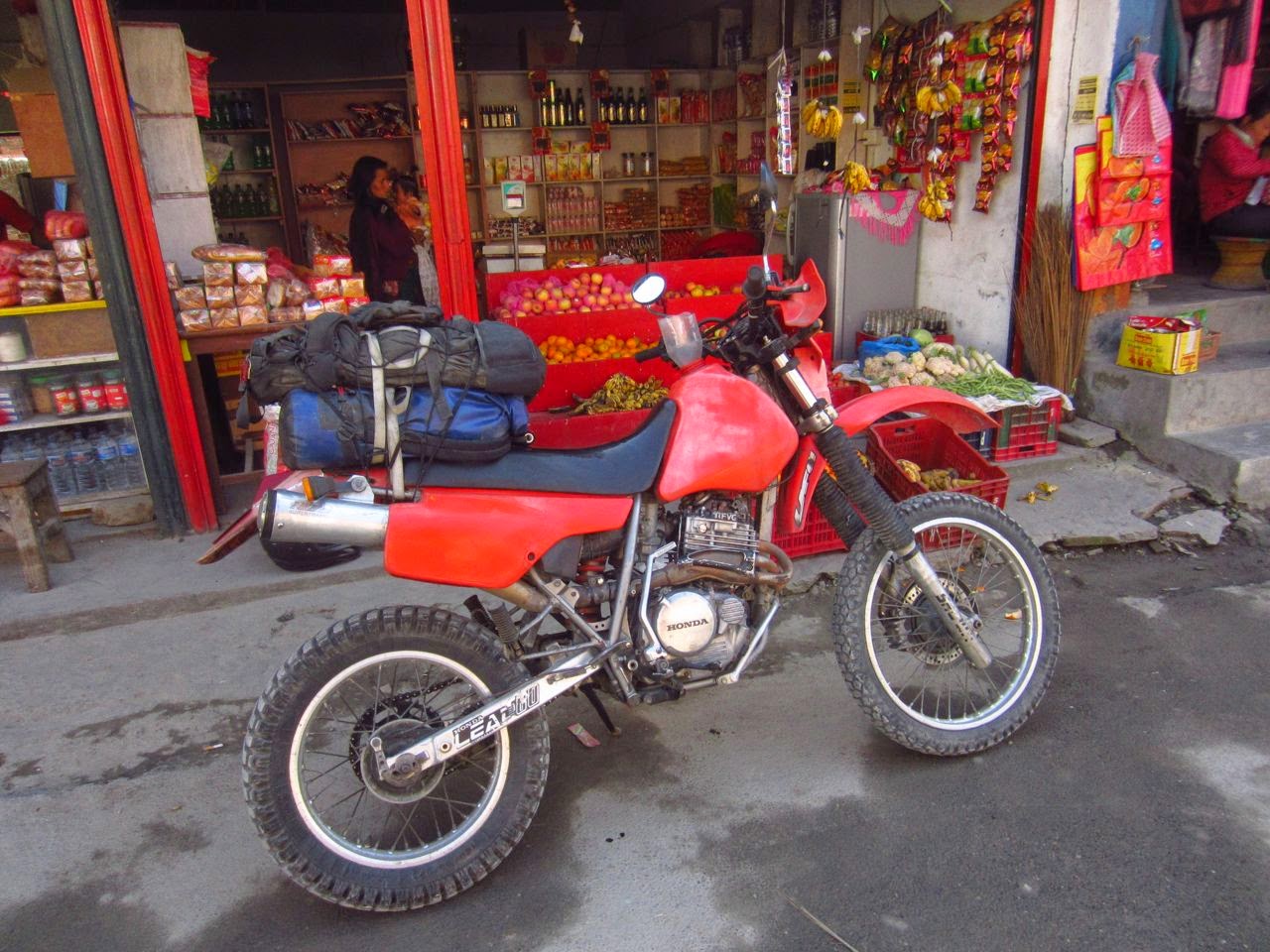 5 liters got me almost full.  I hoped this would be enough.  I was told this was the last place to get fuel so I crossed my fingers that this was false information.  I already had too much gear on the bike and didn't have a good way to carry fuel with me.  This could end up determining how far I was able to get into the Annapurna Conservation Area.

The pavement ends here in Besisahar.  I wolfed down some fresh oranges and a liter of water.  I bought another liter of water for the road and thanked the shop-keeper woman, who was so happy to help me out.  She spoke very little English but was very excited about the big dirt bike.  I was really realizing that though locals ride small motorbikes up to the villages, motorcycle tourism is pretty limited so far in this region.  I was excited to get back on the bike and get off the beaten path.  I checked the air pressure in the tires just on a whim.  Good thing I did too, because both front and rear were below 15 psi, which explains the way the bike was handling on the pavement.  I found a moto shop pretty quickly and aired up to 30psi.  Well airing up I discovered this: 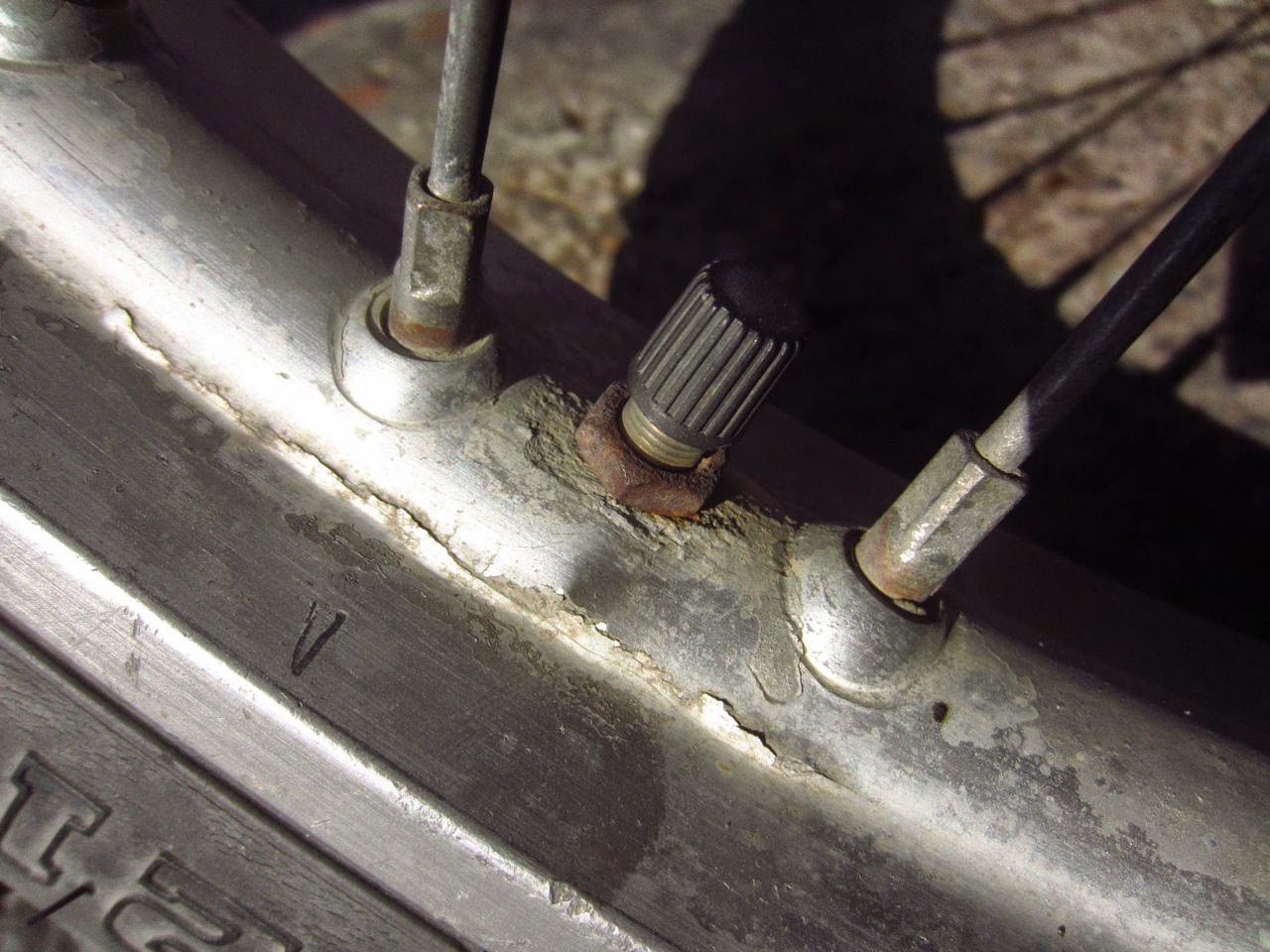 Yeah that makes a guy feel really confident heading into the roughest roads of the region with no spare tubes, tools or compressor/pump/CO2 etc.  I knew I'd burn the rest of the afternoon trying to source these things out here in Besisahar, so I crossed my fingers and headed off to the end of the pavement and beyond. 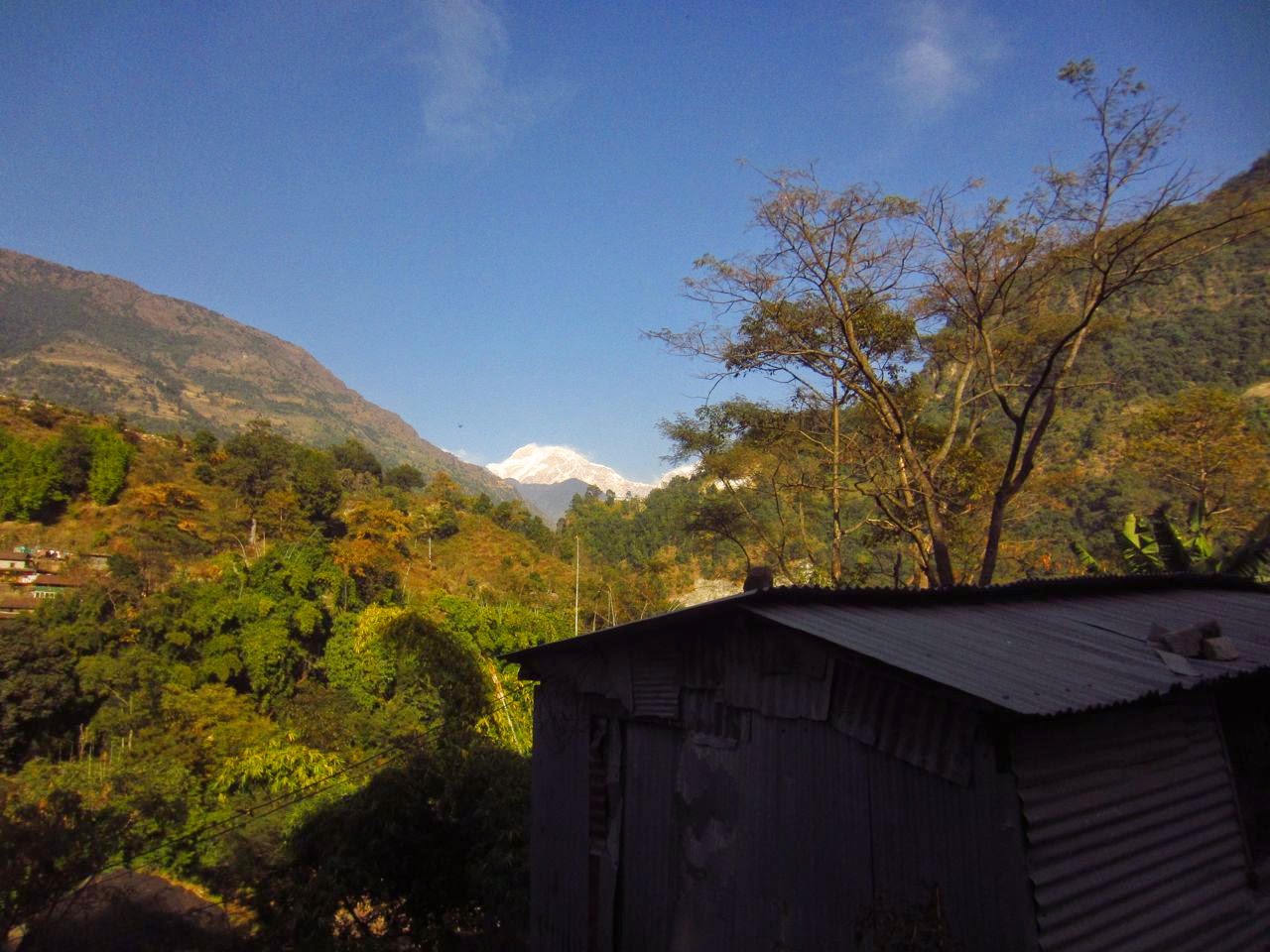 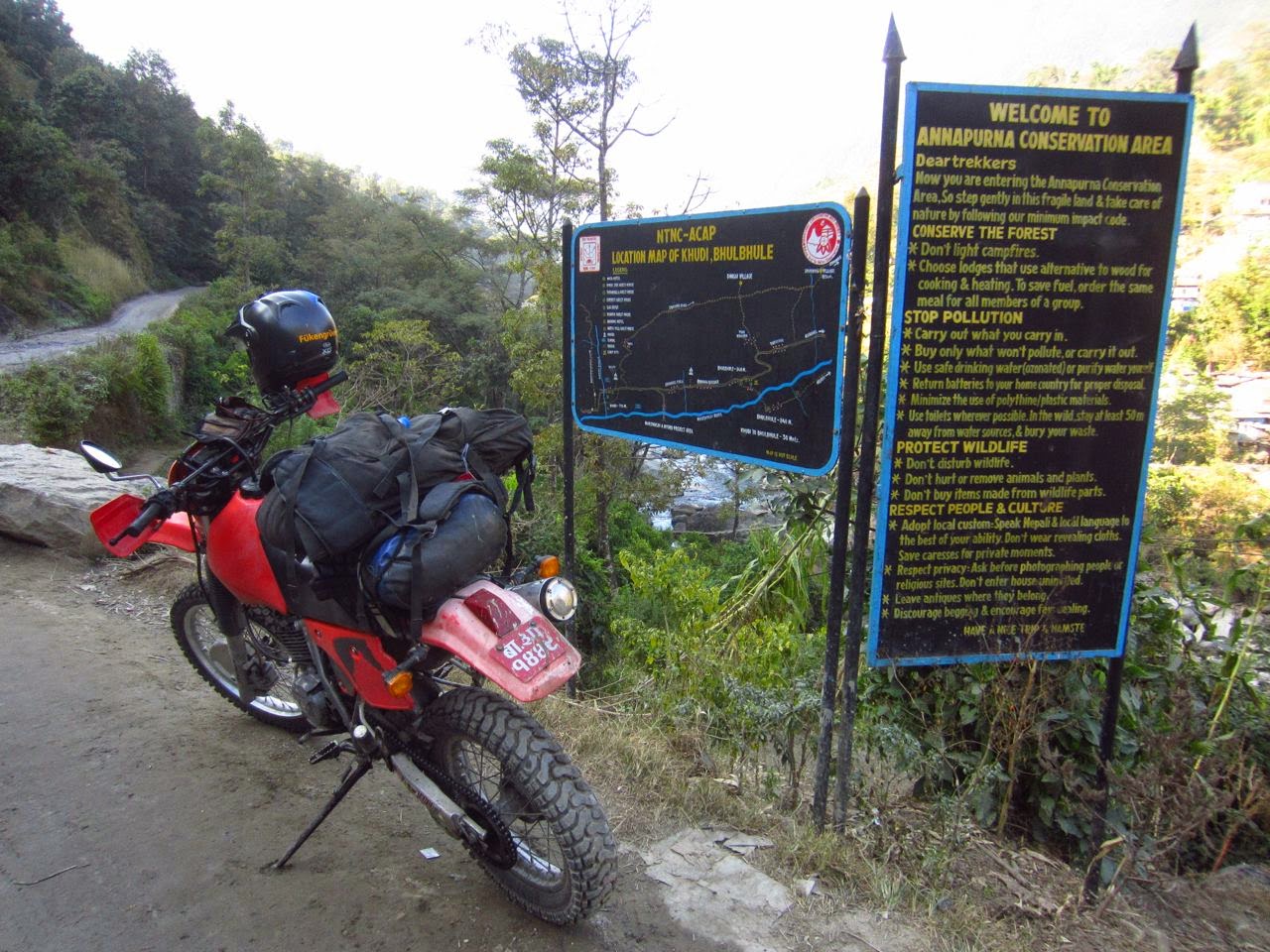 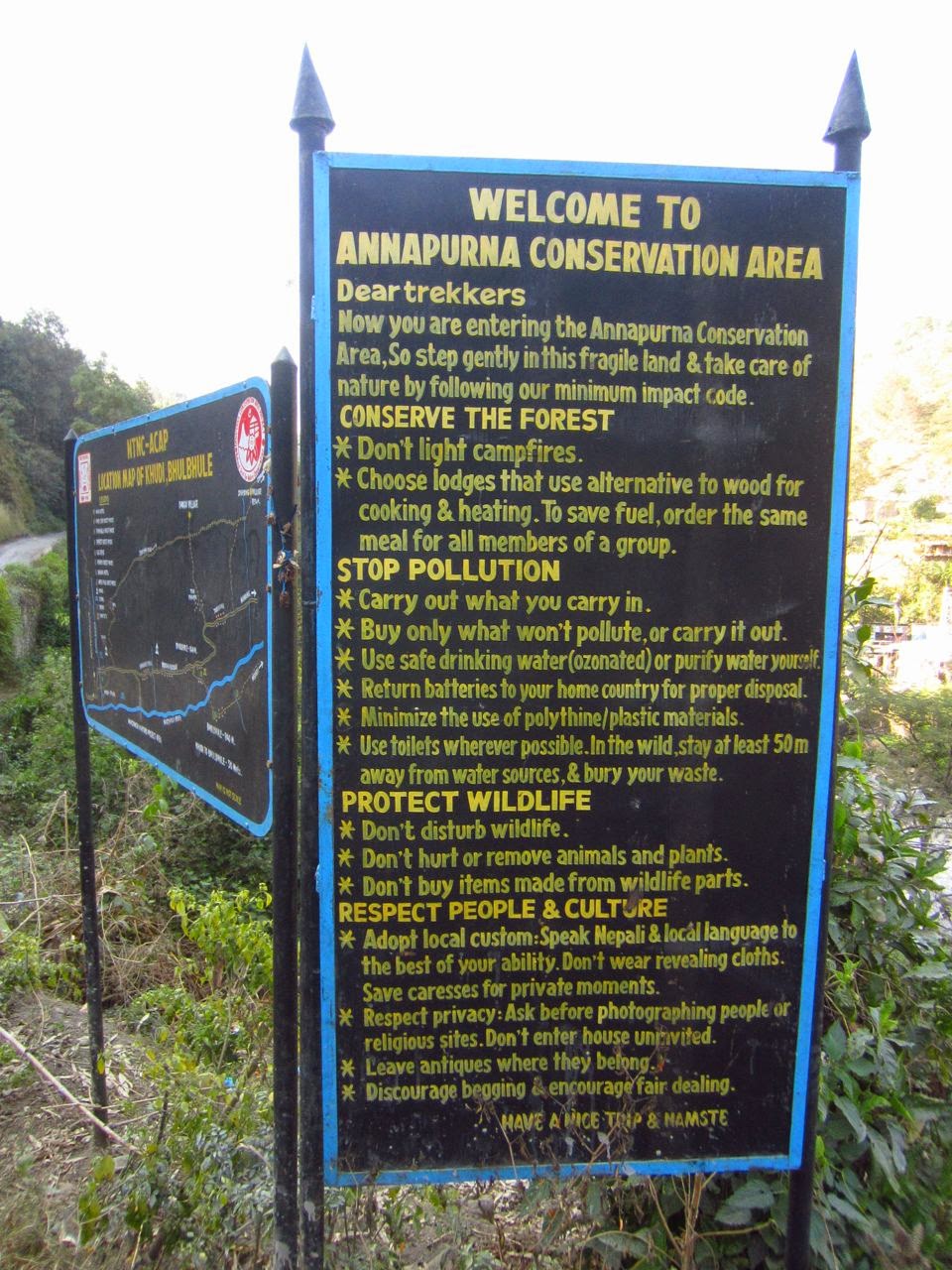 A short few k's and I arrived at the official entrance to the Annapurna Conservation Area.  I was really excited to finally be entering the area I'd been working towards for the last few weeks.

I'd been told that I'd have pretty good roads until I got past the big Chinese Hydropower plant project.  I figured it would be a big project, but I was surprised at the tunnel through the mountain and then the cranes and dozens of dump trucks and concrete trucks. 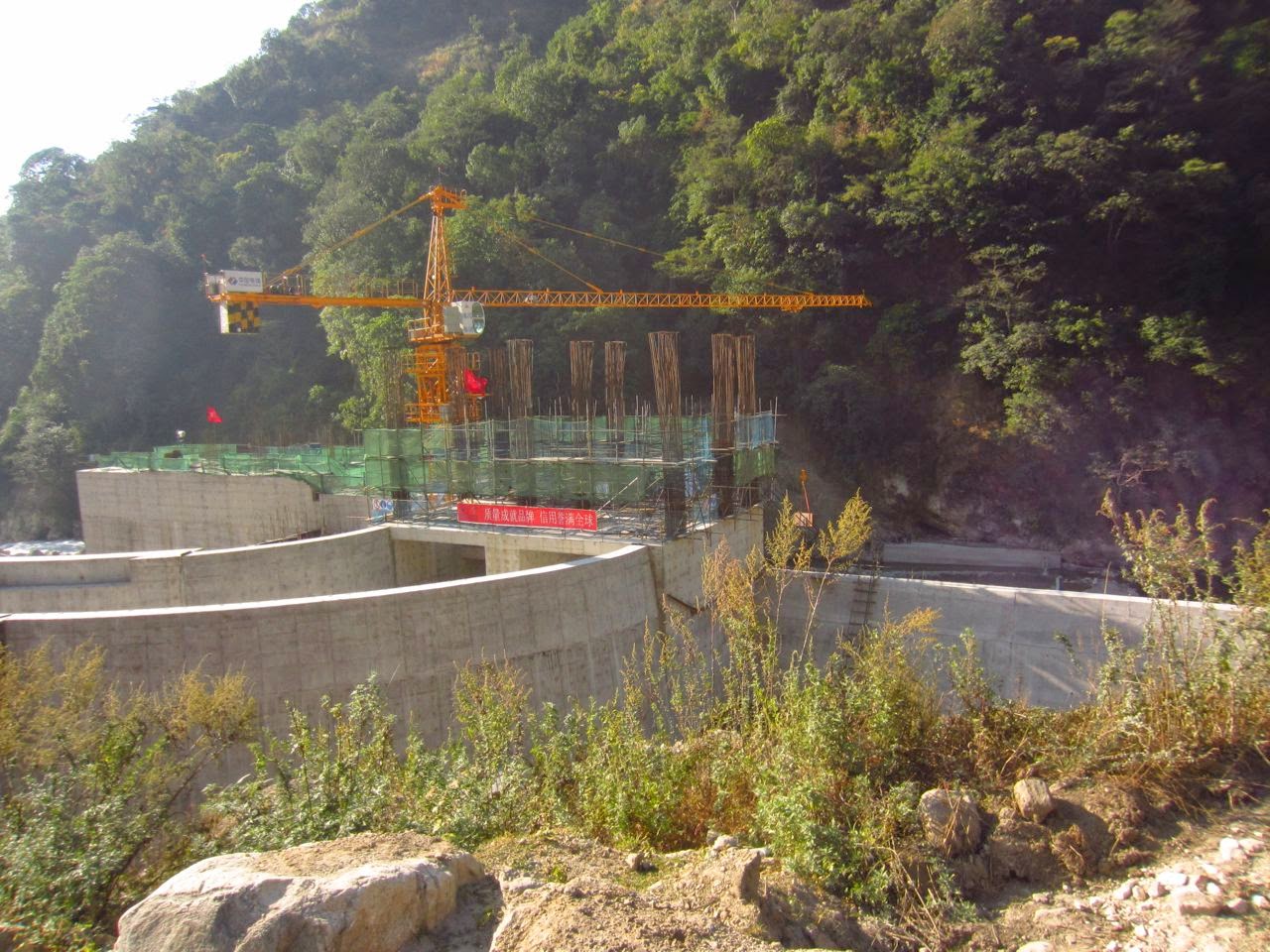 The information was absolutely on spot.  Once I crossed the small makeshift bridge upstream from the hydroproject, the road turned into a real jeep road... like the 4x4 kind.  I was loving it.  The Honda XR350R was performing awesome.  Not only just performing awesome on the roads, it had a ear to ear grin plastered to my face! 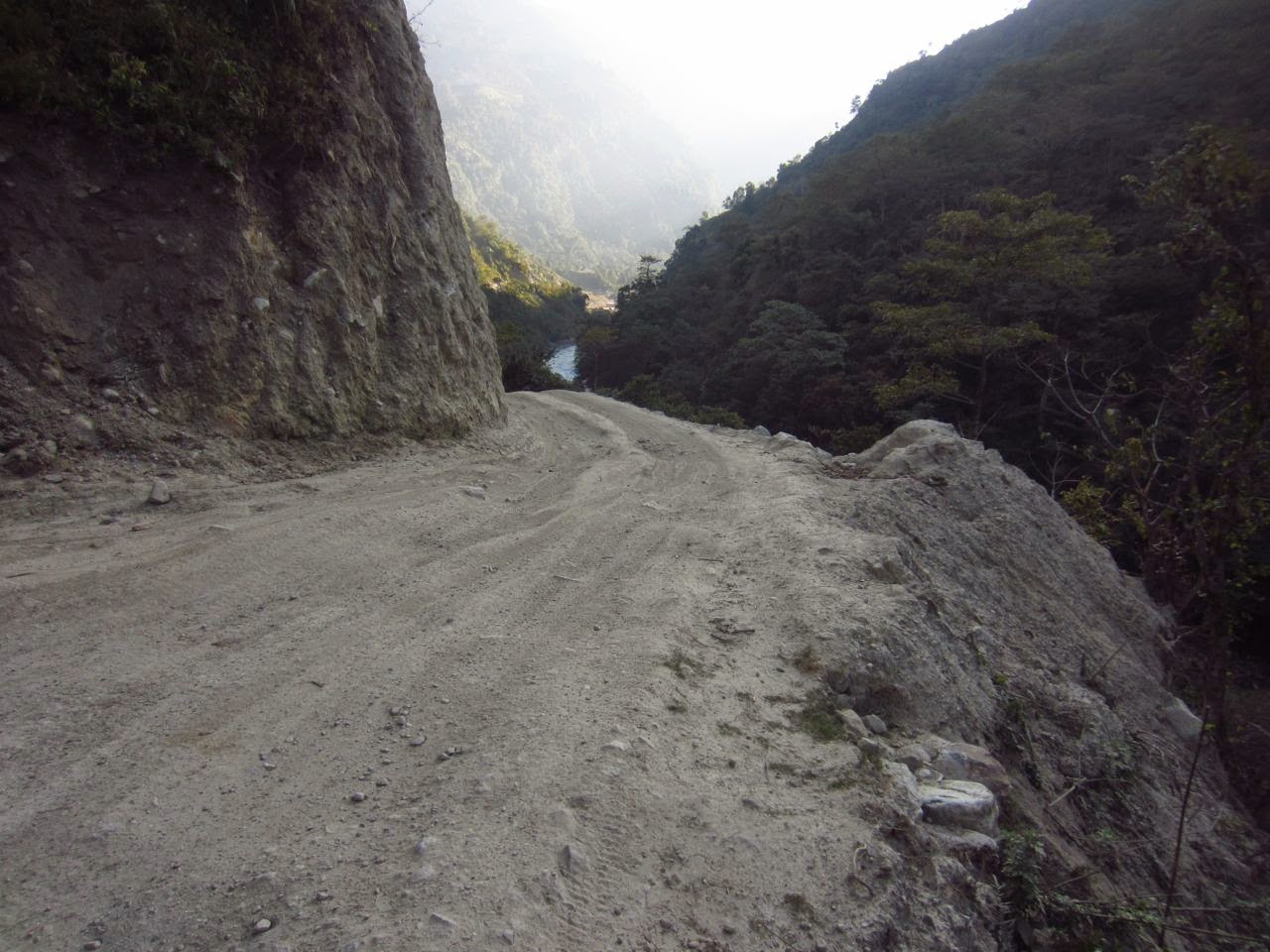 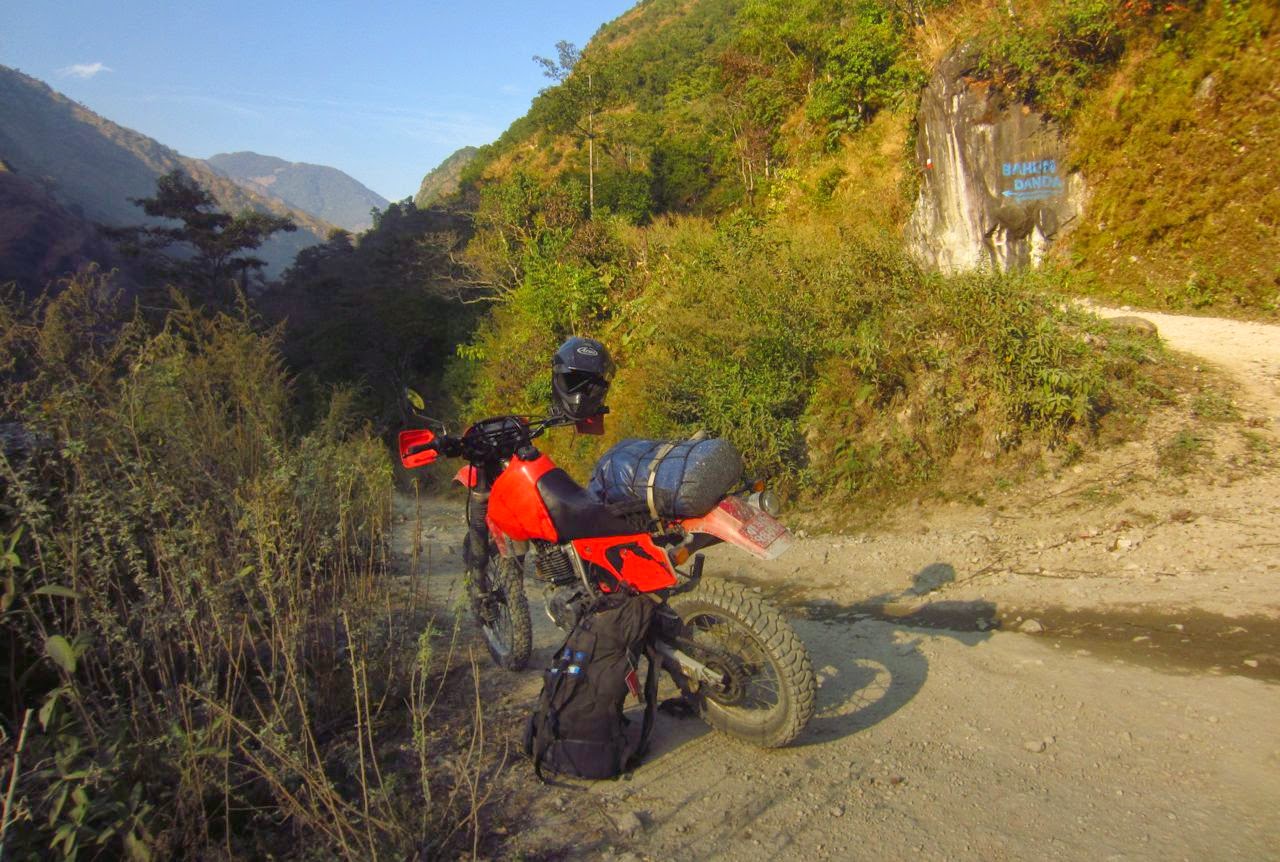 I came to a fork in the road.  I wasn't sure which way to go and it didn't seem like anyone would be coming to tell me.  I hung out snapping some photos watching the sun head for the ridge.  I realized that I was going to need to think about staying in one of the trekking villages soon.  I was told that the valley was laid out much like the other side of the Annapurna circuit, meaning that every 5-10 km's there would be a village with a group of teahouses and guesthouses.  The beauty of this is that once I got a feeling for how long it was taking between villages, I'd have a good idea of how long I could keep pushing up the valley. 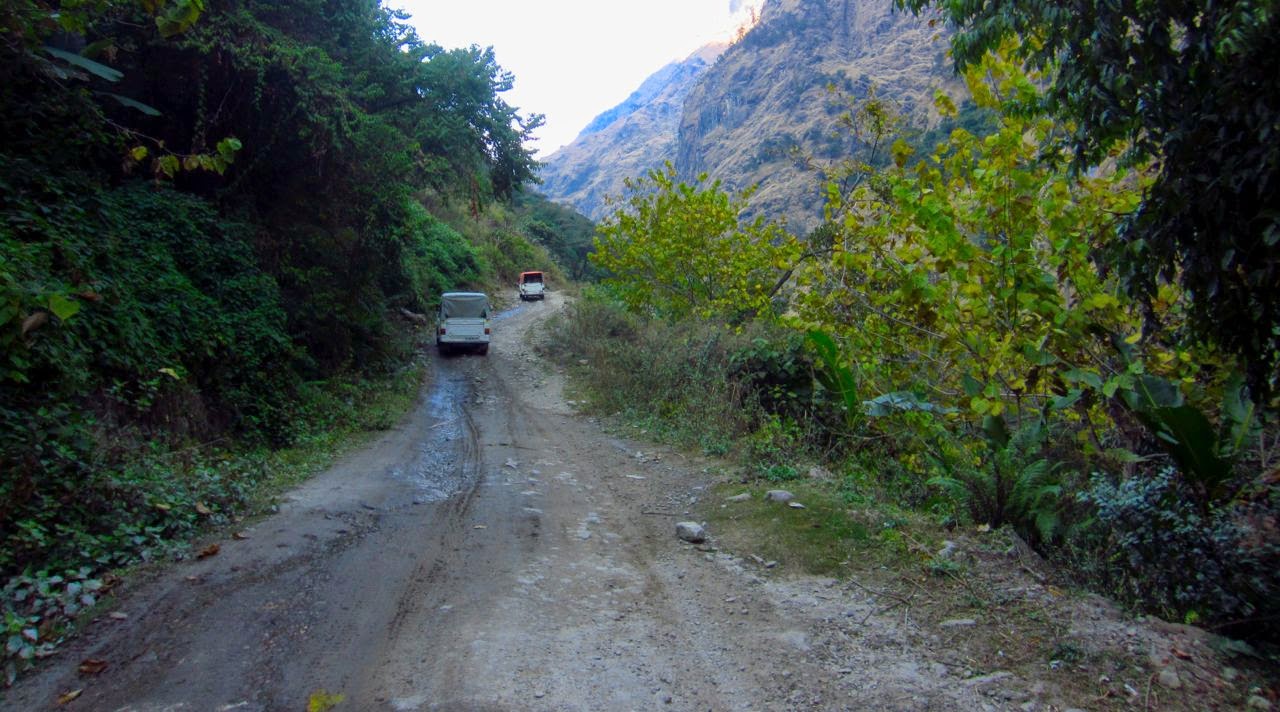 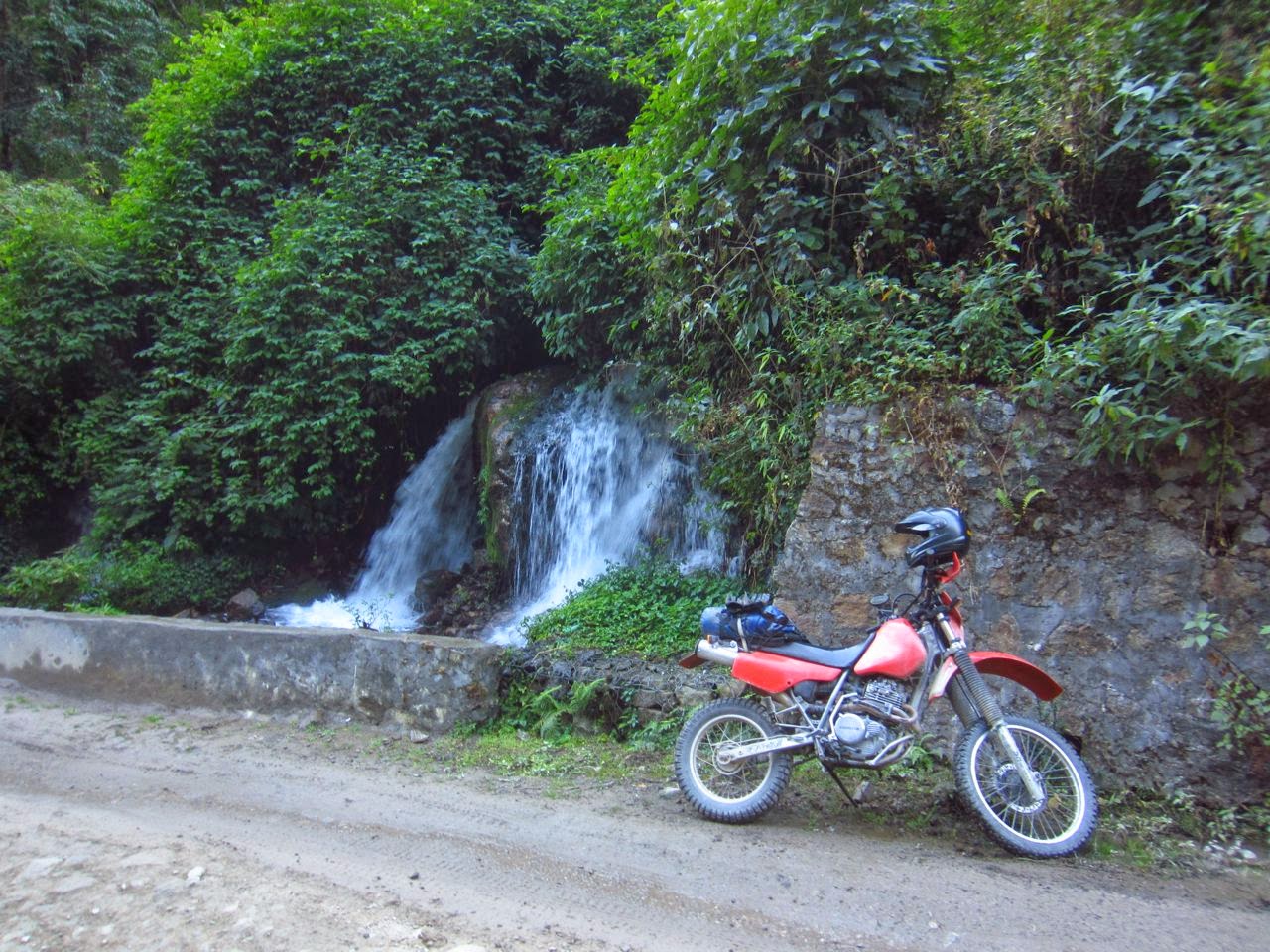 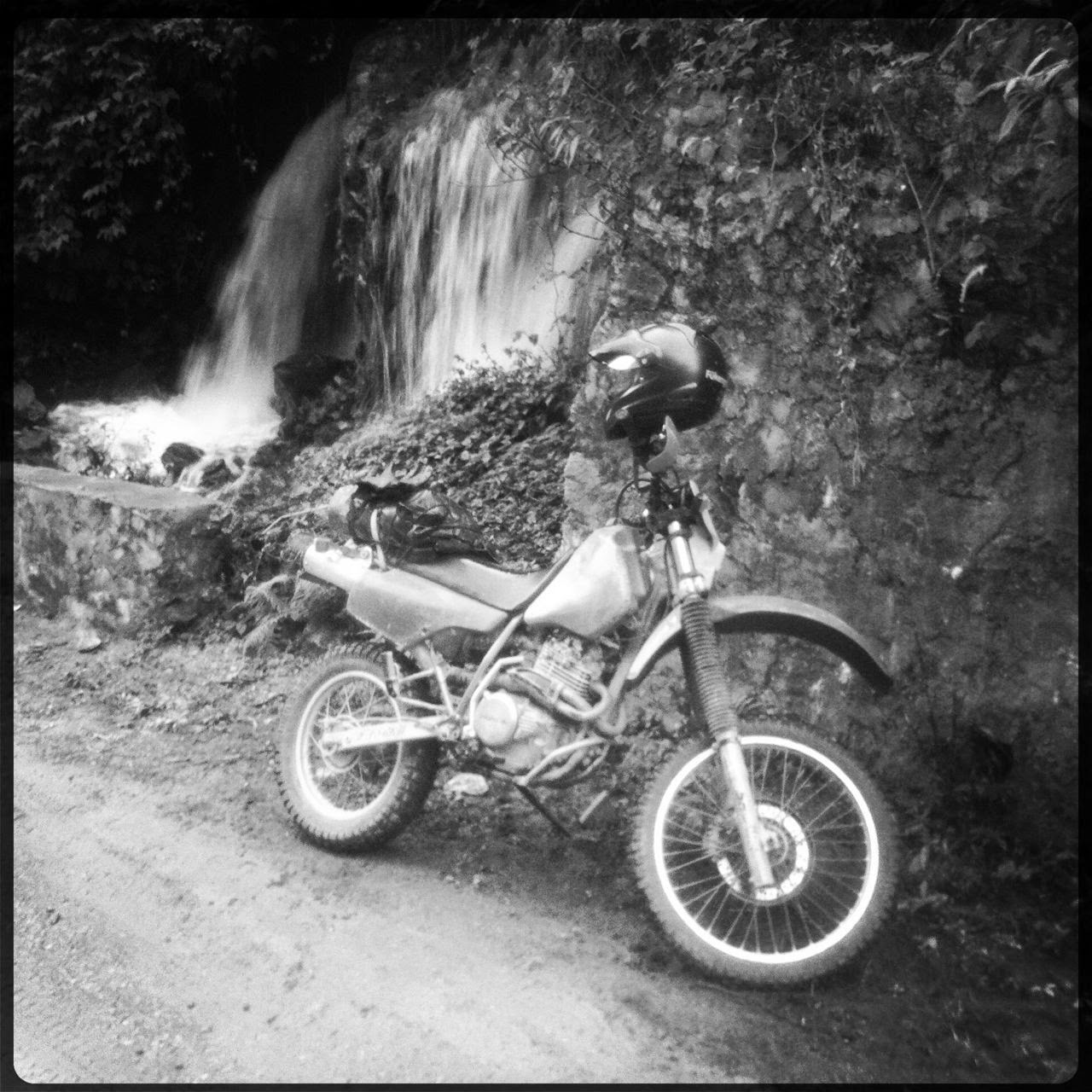 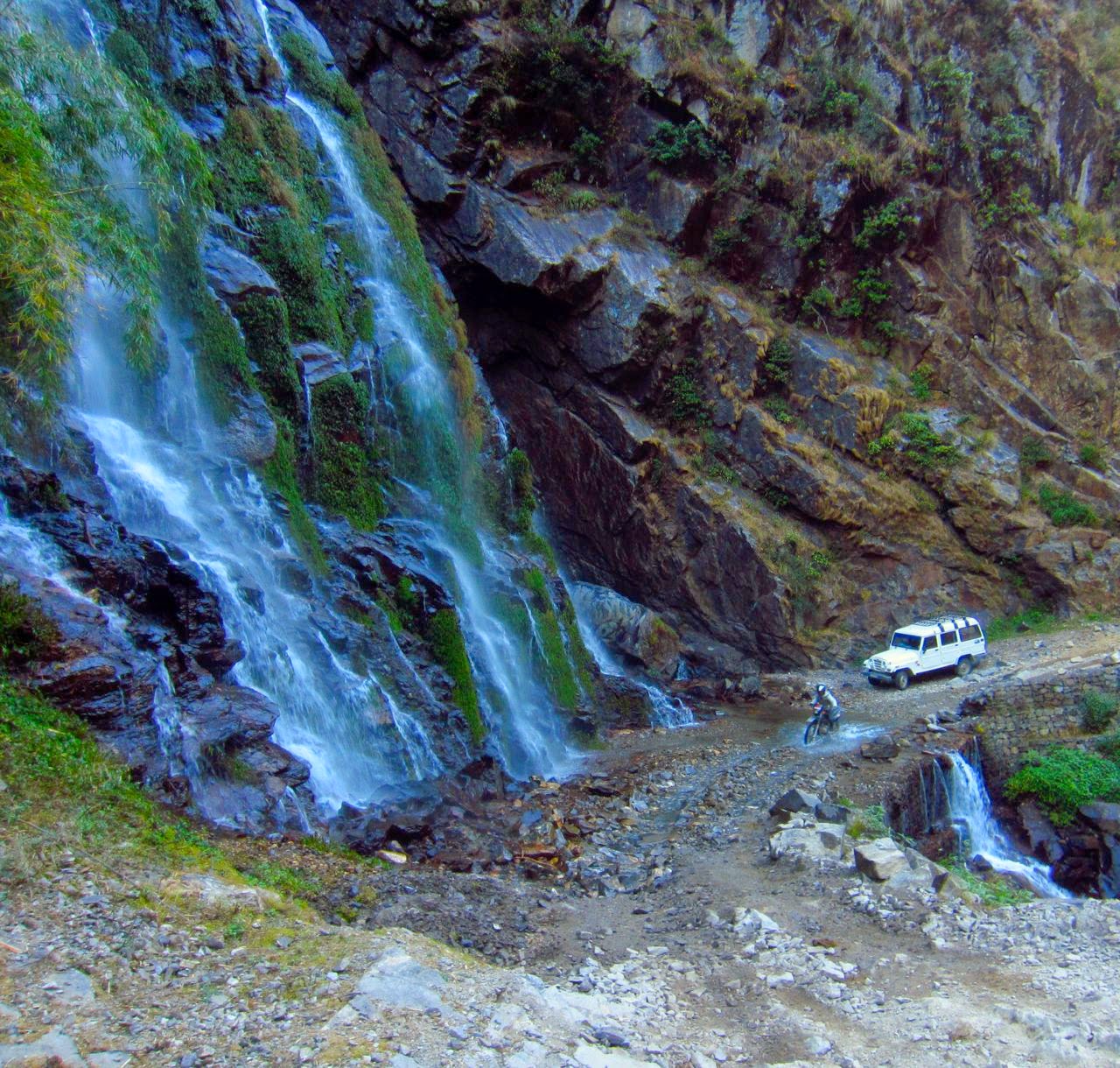 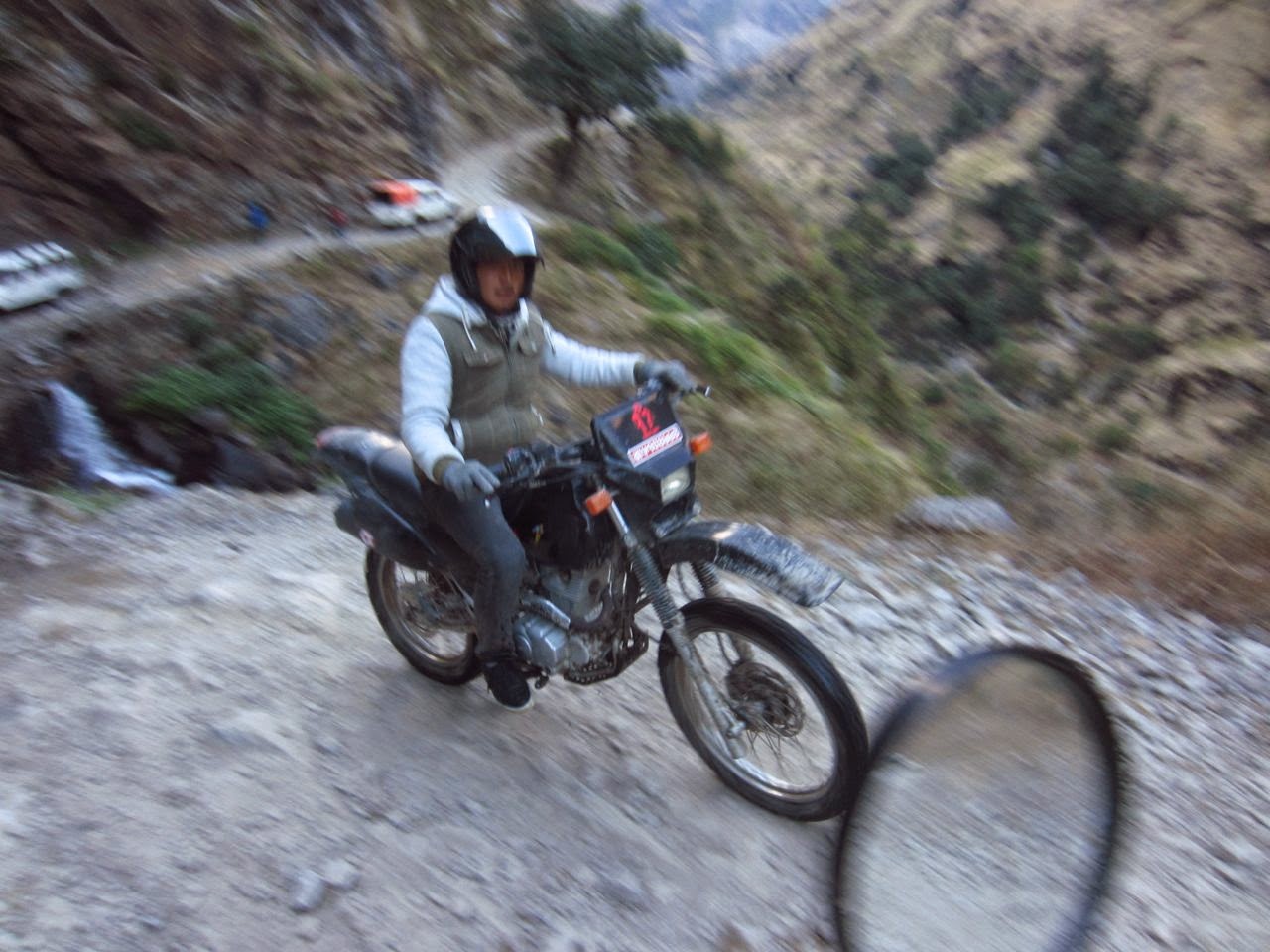 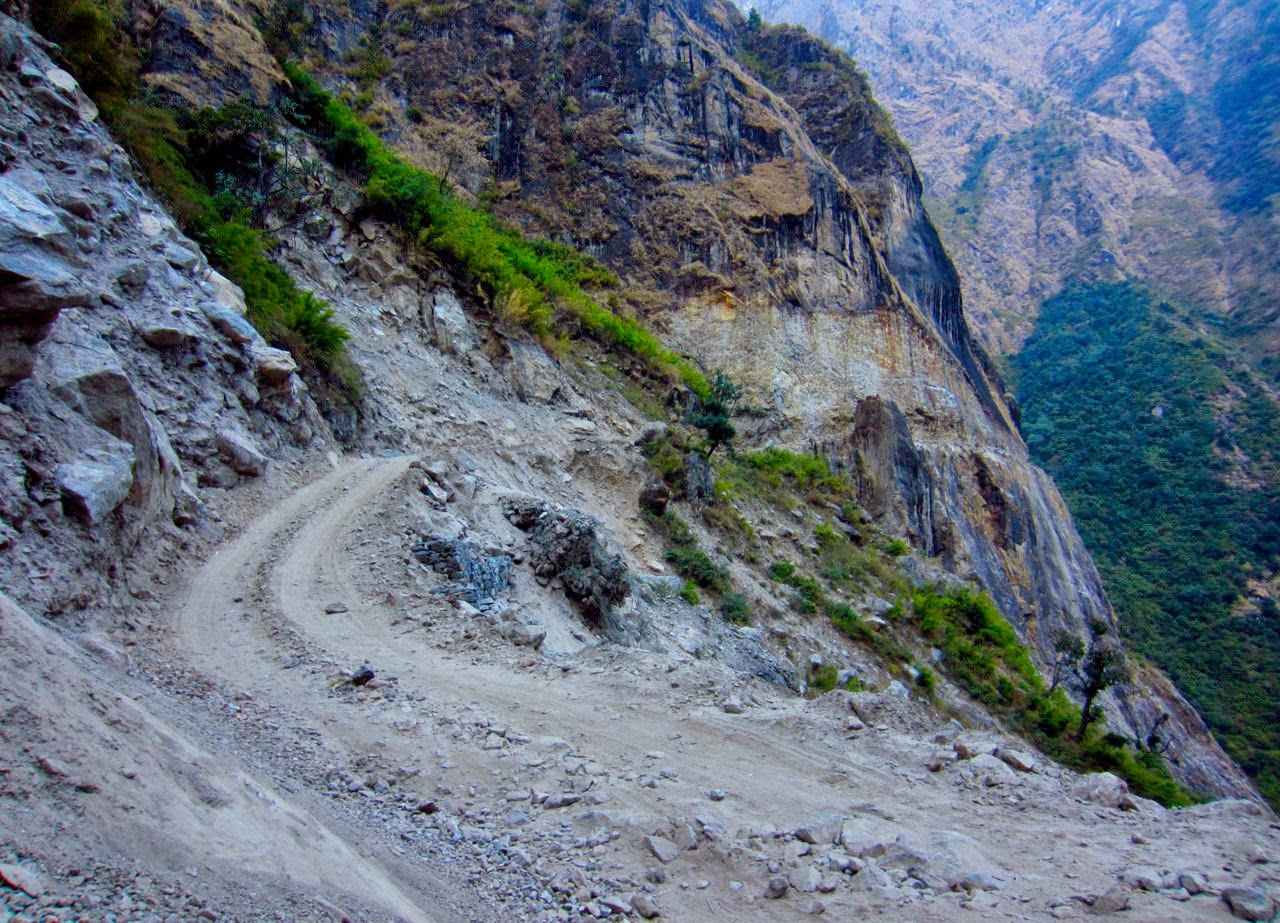 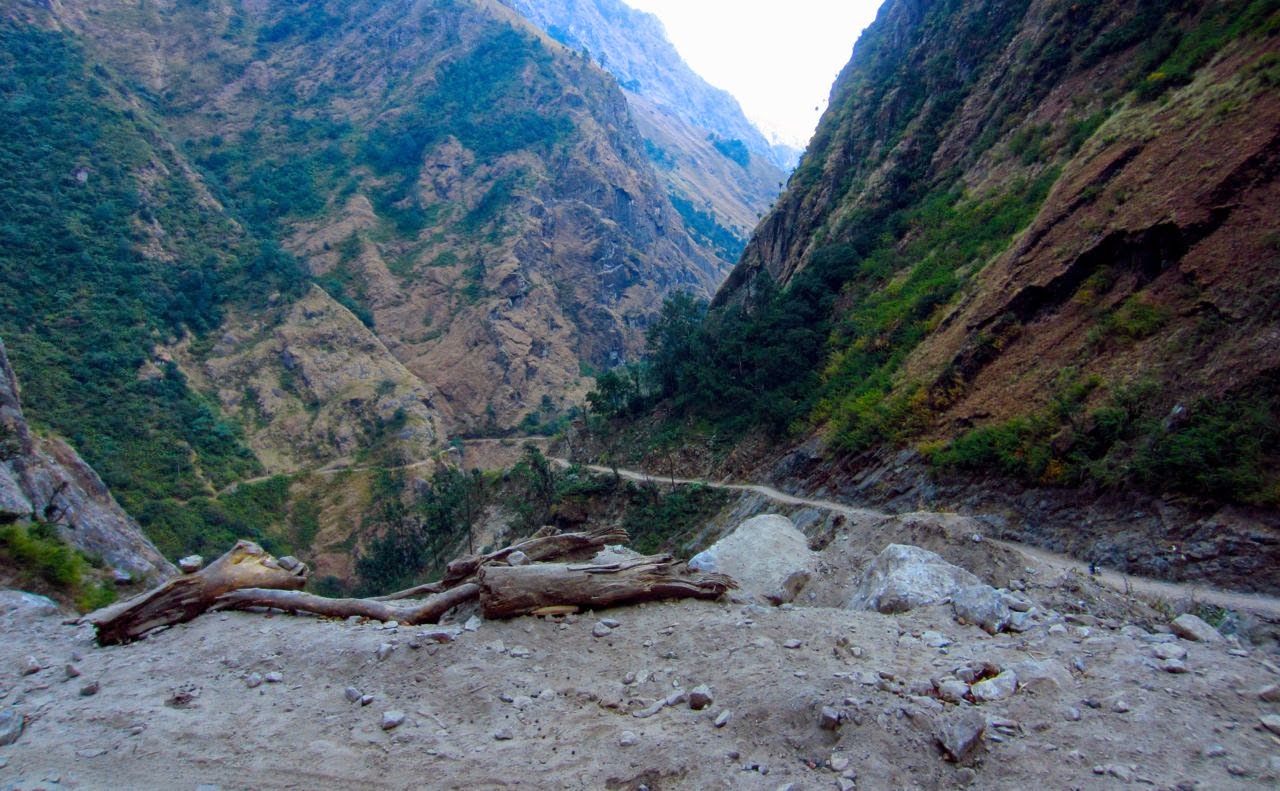 The road got flat out exciting.  I was standing in the footpegs most of the time and the riding was just epic.  There was such of mix of terrain.  At times it was really decent road, but the drop offs  made it absolutely necessary to be fully concentrated.  And then the road would rise and climb and subsequently get chewed up with big rocks and ledges and loose gravel and holes where jeeps had gotten stuck... it was a constantly changing, constantly challenging ride.  I couldn't have been happier.
I thought about how this riding was completely the opposite from riding on the Pritvi Highway, constantly negotiating traffic.  But it required as much concentration... all of it.  All the concentration you could give was needed to keep the bike moving forward and upward and not out of control and off the road to imminent death below.

This thread of road, trying so hard to be a gesture of horizontal in a landscape entirely dominated by variations of vertical, snaked along the cliff sides.  Evidence of previous wash outs and landslides were everywhere.  I stopped frequently to make some photos but it was just such an approximation.  This landscape was so big and so impressive that it was very difficult to get an image that really held the scope of the scene.  Plus dealing with the variation of light between shade and sunlight was nearly impossible.  I hope these images can inspire your imagination...  I'm not sure how else to impress that this landscape was so big and so impressive that I was really giggling in my helmet at the absurdity of there being a road here at all! 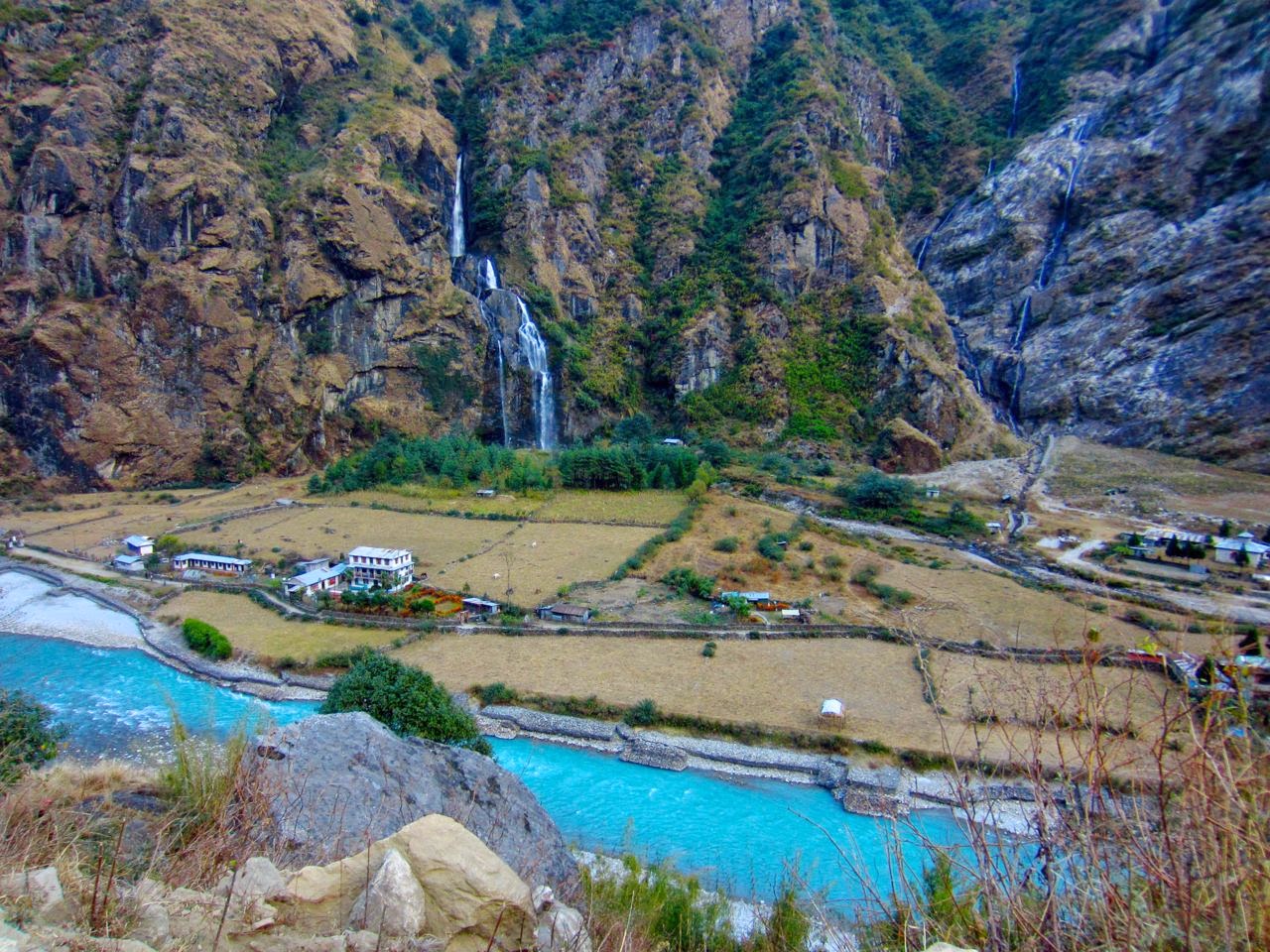 It was hard to believe what I was seeing was real.  So incredible and beautiful and constantly changing and shifting, there were at least a dozen waterfalls dumping down into this amazing village tucked down in the valley.  I stayed high and kept pushing up the valley hoping to make a few more kilometers before stopping for the night.  It was about 4pm at this point.  I figured I had another 1.5 hours before it would be completely pitch black and terribly dangerous to continue.

I reached Dharapani and the first Nepali Police checkpoint and Annapurna Conservation Area Permit check office.  The guys manning these offices in Dharapani were incredibly friendly and seemed genuinely excited to see me here on the big Honda XR350R.    I was happy that I had a permit this time around.  I gained some information from the locals not affiliated with the offices about where I should stay in town.  The officials were unwilling to give their opinion as it is prohibited for them to make any suggestions about which guesthouse to stay at. 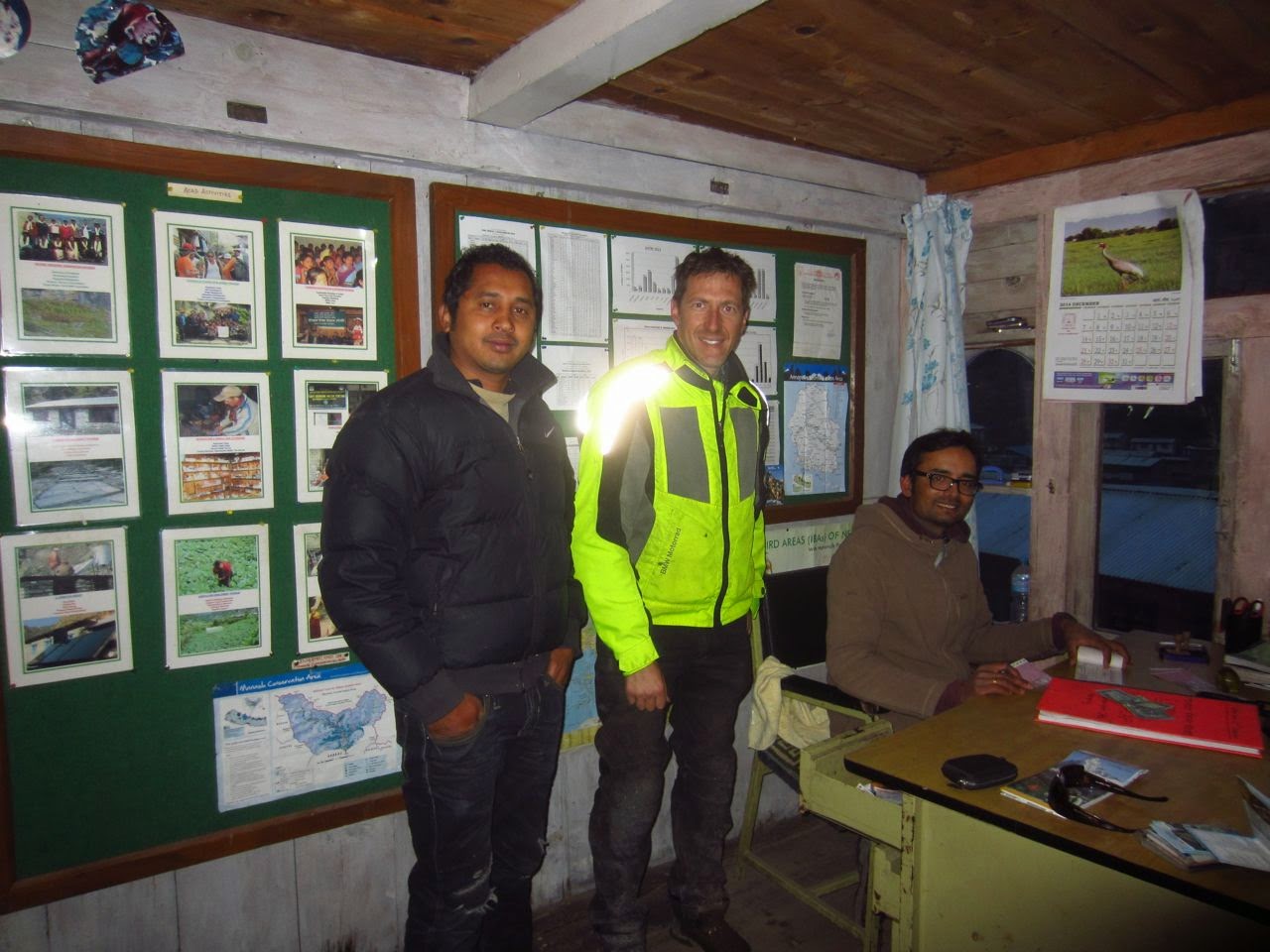 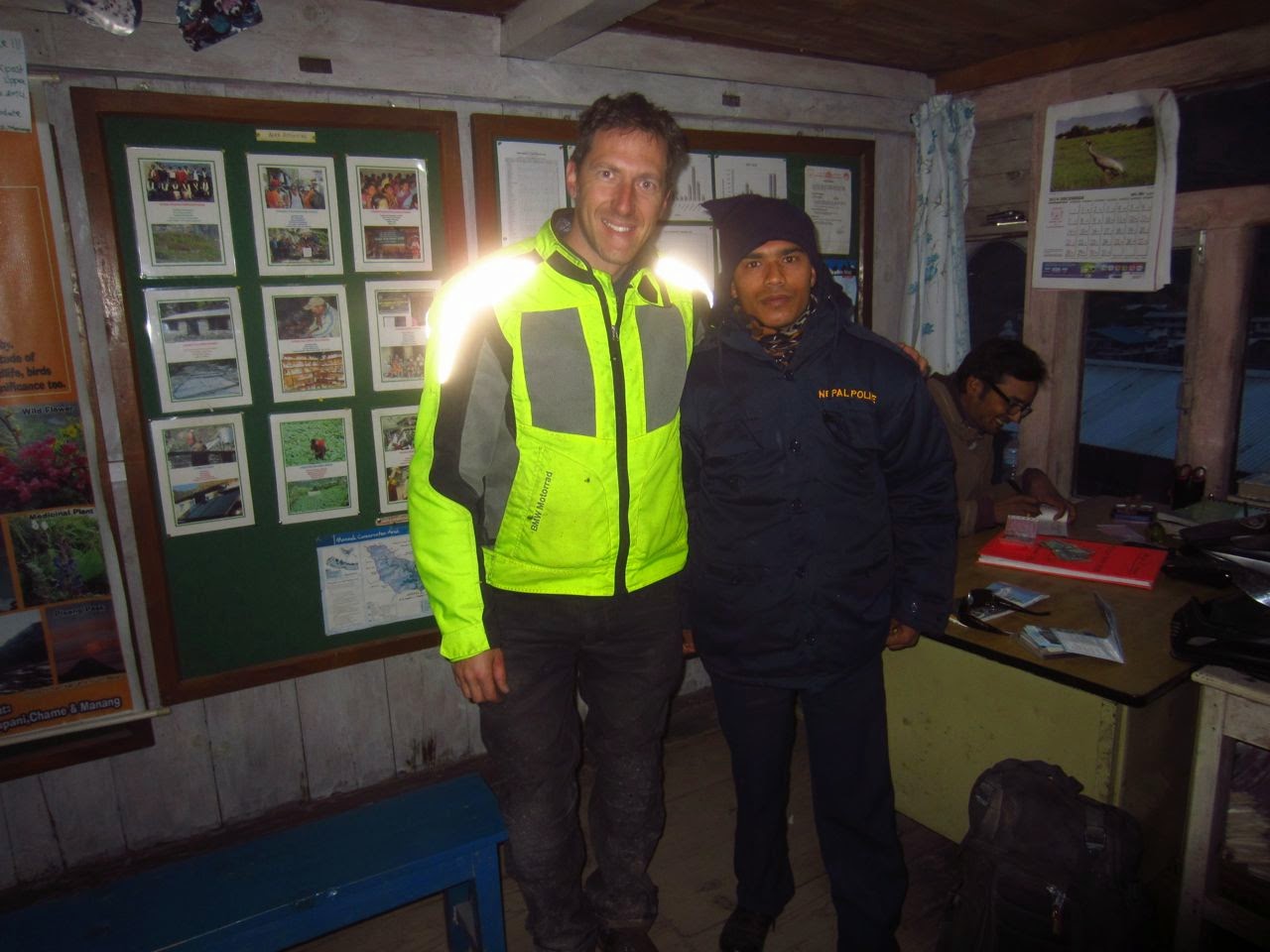 In the end I was pointed to Three Sisters Guesthouse by a guy on the street saying that there was a place for the bike and that the food was good there.  It was amazing how the town seemed like a ghost town.  Only two weeks earlier on the other side of the pass the guesthouses were mostly full.  The peak season had passed and now only a light trickle of trekkers were passing through towards the Thorung-La pass.

I was welcomed warmly at Three Sisters.  A few locals had gathered and were drinking warm Rakshi, local rice wine, like Japanese Saki.  Of course they invited me into the kitchen and wouldn't take no for an answer.  I didn't want to be rude with my non-drinking ways these days so I had a small glass of the warm rakshi with my new friends.  The guy with his arms around me was a little too excited that I was from America.  He told me no less than 100 times that he didn't like people from England, Australia, Germany, etc.  He only likes America.  America the best.  His English was broken but his point was not.  He was very affectionate... like to the point I actually had to ask him to stop touching me.  He didn't.  I blame it on the rakshi.  Great people... and probably the best Dal Bhat that I had the whole trip. 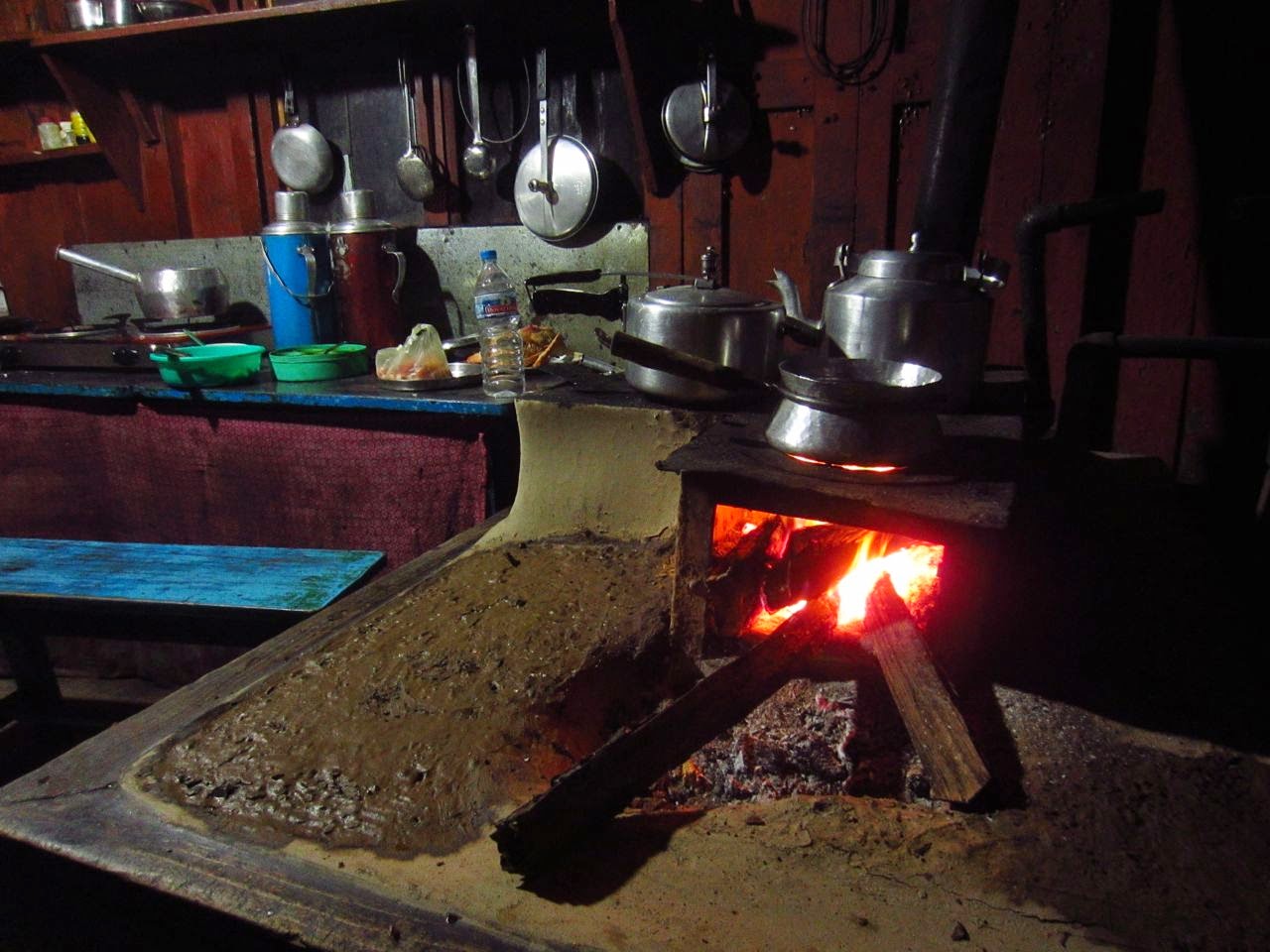 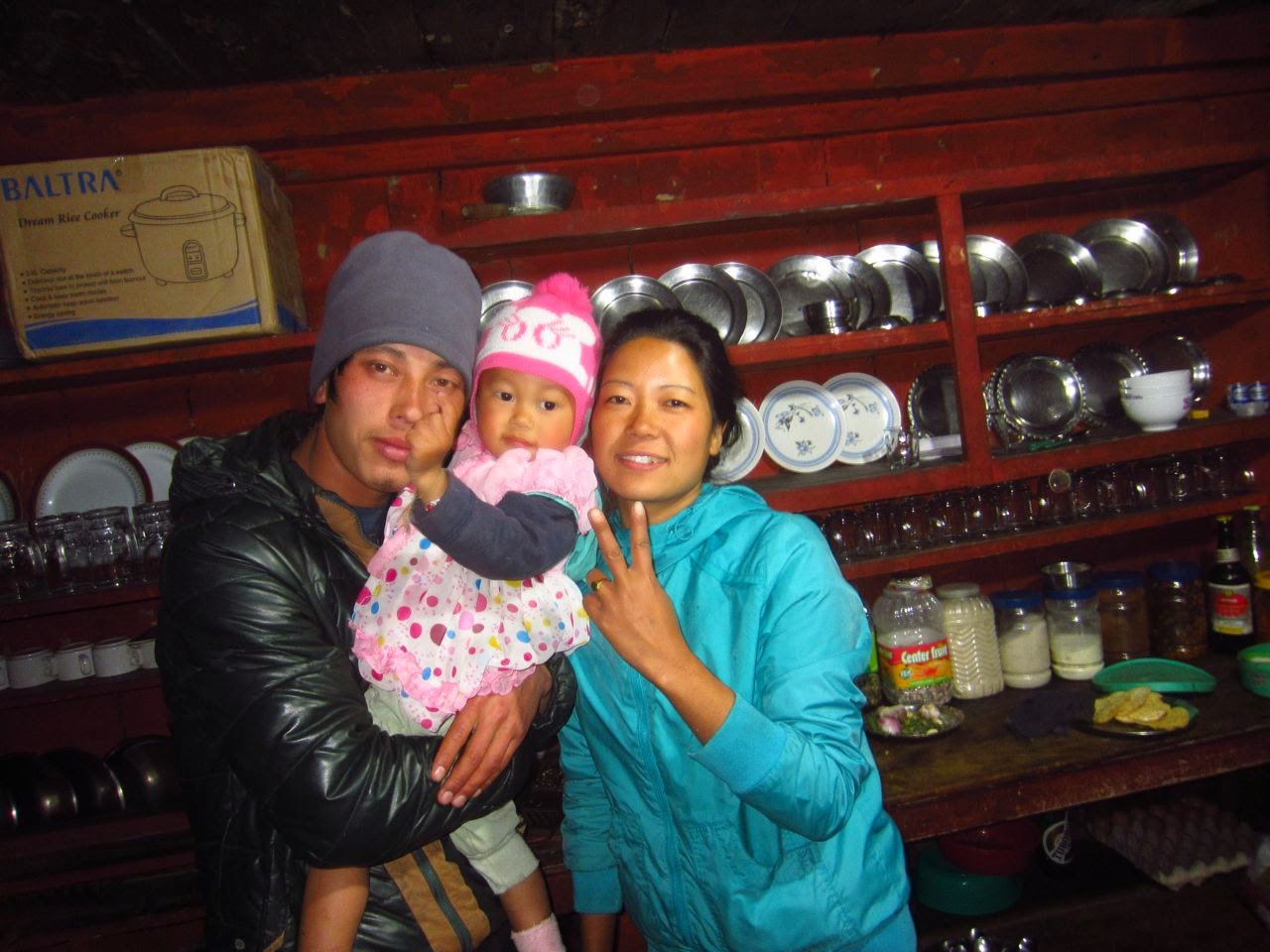