The title pretty much sums it up.  After a few huge days on the bike it felt more like a week has gone by rather than a couple days.  I got the bike returned before sunset on Friday night.  As I said in the end of the last post, all was well.  Amar Gurung at Bikemandu.com was stoked that I didn't destroy the Royal Enfield.

We chatted for a few minutes while I waited on a taxi to take me through the darkening streets to the International Guest House, which is right on the edge of Thamel's craziness and its glories... like too many options to choose from for food and entertainment.

My new friend Camilla from Denmark suggested that when I got settled, we should me at Revolution Cafe.  There was live music there... a trio:  classical guitar, tabla drums, and saxophone.  Pretty solid jams.  They even busted out a Metallica cover and kept it going while the power cut and didn't miss a beat until the generator kicked on powering them up again.

For the first time in the trip I ordered up a burger and veered from the local cuisine.  I was not disappointed.  It was a tasty burger, complete with cheese and BACON.  Yes!  They eat pork in Nepal. 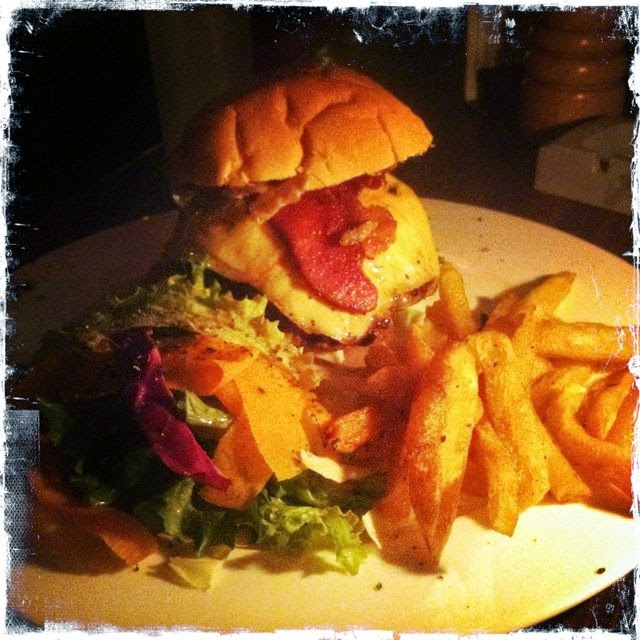 So after an evening of good food and music and someone to talk with...  This part is not to be taken lightly.  After days on end inside a motorcycle helmet, having a friend to converse with was a real pleasure.  We stopped by a smoky bar on the walk into central Thamel.  I'm off the booze still but it was nice to hang out and check out the KTM expat bar world for a minute.

Everything closes down in Thamel by 11:30pm so it's not a real rager nightlife scene.


I spent my morning getting blog posts, work, and my belongings sorted... all with this view right out my window.  I chose the cheapest room in the 5 story hotel because it had the best view.  It was a four bed dorm room but they cut me a deal to rent the whole thing.  The shower and the toilet were outside the room but it was an easy concession to make to have the terrace view from my room. 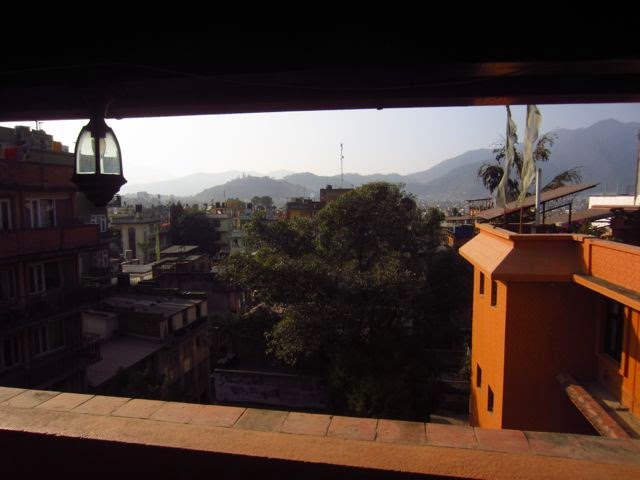 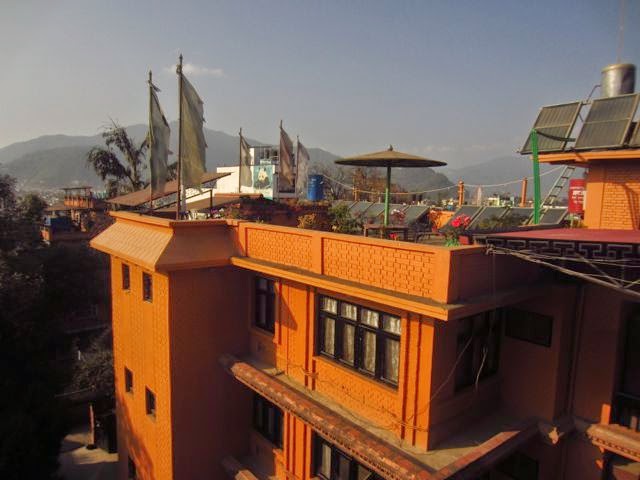 The new plan was to bus it back to Pokhara, find a dirtbike, and head back into the Annapurna Conservation Area on the east side this time, heading for the village of Manang, and possibly beyond to Khangsar.

These roads on each side of the Annapurna Circuit are pretty new.  In a lot of ways it is a shame that they put these roads in, forever changing the feel and experience of trekking in such a remote area in Nepal.  The roads are also having impacts on some of the villages that used to receive a constant flow of trekkers and now are either off the route, or the trekkers opt to start their trek further up the valley and pass right by them.  The other impacts of having a road in an area is, of course, having vehicles in the area.

It is a unique situation to have access to an area like this.  In some ways I question the ethics of riding motorcycles here, but when I see the jeeps, trucks and busses that ply the roads, it becomes a non-issue for me.  I have to remind myself that it is the locals who want these roads.  This is progress.  These roads, though they are breaking through remote and wildly beautiful unspoiled landscapes, are still the means for more efficient transportation of people and goods in this area.  Before these roads, not that long ago, foot, yak, donkey, horses... these were the vehicles.  And I'm sure the rogue helicopter as well.

I'm accustomed to a different take on roads in natural and wild areas.  The take that they should all be shut down and banned from any sort of motorized use.  In Colorado, where I've spent a lot of time riding some of the most incredible singletrack motorcycle trails in the world, jeep roads, forest roads and motorcycle trails are constantly under the pressure of closure.

Pressures from lobbyists, environmentalists, budgetary issues in the U.S. National Parks Service, and Bureau of Land Management, all play a role in why roads get closed on the public lands in the USA.  But here I didn't even get a dirty look on the road to Muktinath.  The only look I got was astonishment.  And plenty of smiles.

I was hoping the same would be true of the east side of the Annapurnas as well.  Amar had given me a number of a contact in Pokhara that should be able to find me a dirt bike.  Camilla got me a number for her preferred bus company, Tourist Express...  I was able to arrange a seat on the bus for the next morning, Sunday.

This meant that I would have about one week to get to Pokhara, find a suitable bike, and head up to Manang and back to Pokhara to catch a return bus to Kathmandu.  If I got in a bind, I could save a few hours by flying from Pokhara to Kathmandu, saving time but costing about 10x as much money, still reasonable at around $75. USD.

A week seemed like enough time, but everything would have to come together really smoothly.  So far, it was.  My bus was booked and with a few more blog posts up, it was time to meet my friend for the bi-weekly show at Jazz Upstairs, a hip little jazz joint filled with half young Nepalis and half all-aged tourists, trekkers, and travelers.  Tasty finger food and a full bar were a good start, but the jazz was excellent.  A young and energetic all Nepali band; electric bass, electric guitar, saxophone and a drummer, who studied Jazz in NYC.  Very awesome evening.

(Insert Jazz Video Here... Kathmandu wi-fi isn't quite up to that task at the moment...)

Camilla had some friends from the UN there.  It was pretty cool to hang out with diplomats from Pakistan, Afghanistan and Kashmir, India, that were all in town for a conference.  The Pakistani and Afghan were from the Pashtun area that spans the border of Pakistan and Afghanistan, which is where my brother was stationed on his last tour to Afghanistan with the US Army.