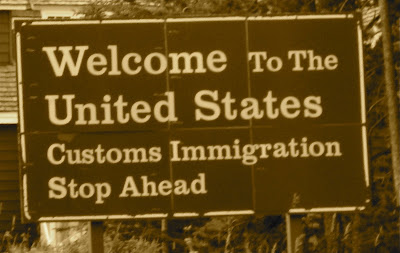 I read Jack Kerouac’s “On the Road” until I fell asleep.  I didn’t dream about bears but I did have some odd dreams…  Like a really vivid dream that I’d woken up to find a dozen other motorcyclists camped all around me.  But when I woke up it was only me and my tent rustling in the morning breeze.  Sunlight was lighting the peaks but I could see a big storm hanging over Glacier National Park. 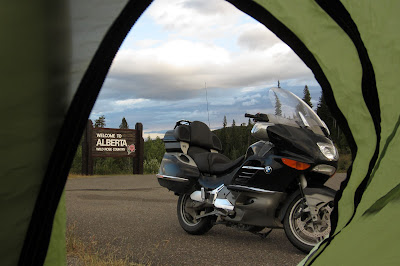 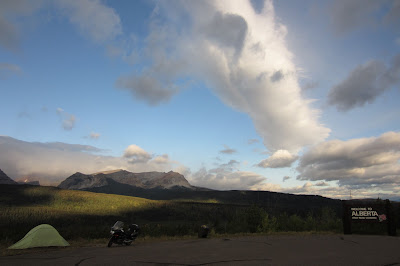 I packed up my gear onto the bike and jumped on Shamu.  We rode the 2 minutes to the border, snapped a couple pictures there for good measure and got into the line.  About a dozen cars and a tour bus were there waiting for the border to open.  I glanced down at the clock on the dash:  8:59am.  Good timing. 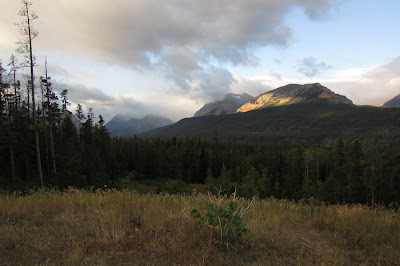 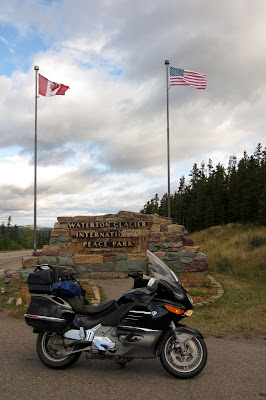 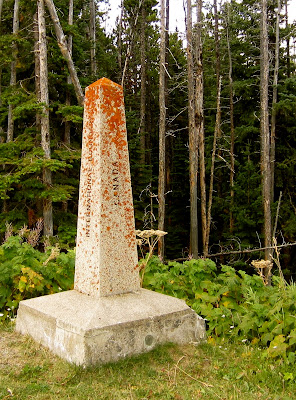 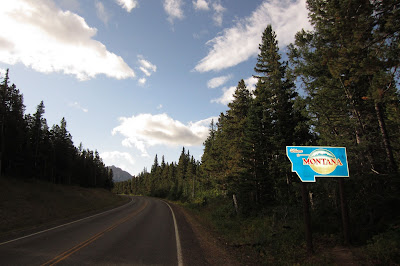 It was sunny out, just a little chilly.   The border procedures were swift and soon I was riding into Montana.  Back in the USA!  The road along Chief Mountain was superb and the sights continued to please my eyes.  I wound around down through the foothills to the little hamlet of St. Mary at the east entrance to Glacier National Park.  I could see heavy purple cloud stuck to the mountains and the hazy hue of falling rain.  I went into the little café and sat down for breakfast and coffee, hoping the weather would burn off as the sun got higher.  Wishful thinking. 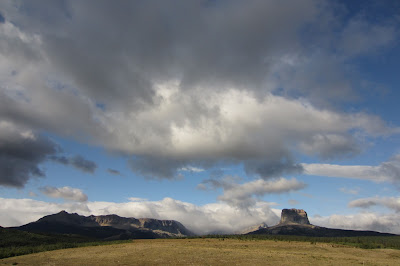 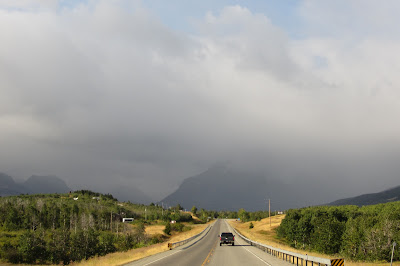 Fueled and fed, I rode off into the park.  It was super windy though still sunny but that only lasted a few minutes as the road quickly climbed towards Logan Pass.  The rain started.  It wasn’t a problem in the beginning because I was moving fast enough to keep it off of me.  The Park Ranger told me today was the last day that the road would be open for the season.  What she didn’t tell me was that the road was under construction at the pass and traffic was only allowed through in one direction at a time.  So I sat in nearly freezing rain for 20 minutes waiting for our turn through.  At 6600 feet it wasn’t even close to being a high pass in my opinion, but it was high enough to be cold and miserable sitting in idling traffic getting rained on.
The big difference between being in the cold and rain in Glacier National Park vs. the Canadian Parks of the day before is that I was always moving in the latter.  The highways followed the general direction of the mountain range whereas in Glacier the road climbs and traverses the mountains.  Also instead of slightly broken cloud cover creating tremendous effects of light on the landscape, here it was completely socked in and gray. 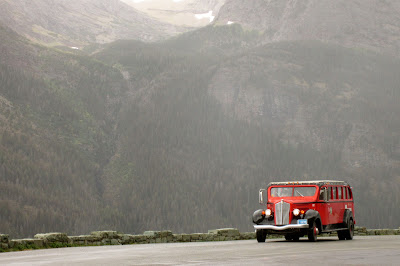 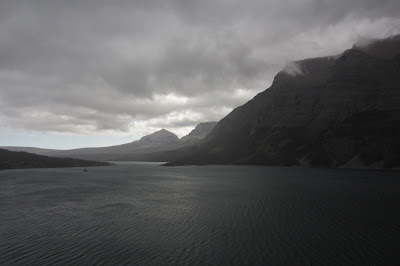 Our turn to go over the pass had come and I rolled along at 5 mph sharing the narrow road that clings to the cliffside with dumptrucks, dozers, graders and excavators.  Oh and it was all gravel, wet gravel, less than desirable conditions to say the least.  I could tell that on a nice day this drive would be astonishing. 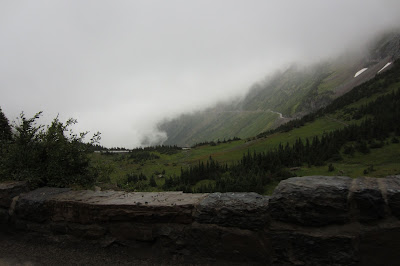 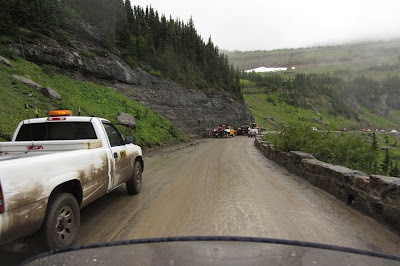 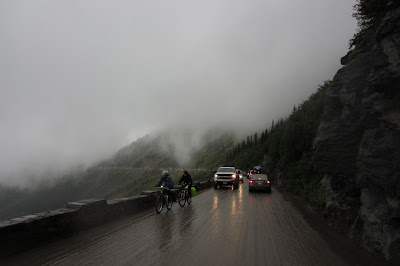 Once I was through the construction zone I zipped along down the valley and out of the rain.  The temperature spiked and soon I was out of the park and ripping southeast through a nice valley filled with yellow fields and tons of sunshine.  The mountains could be seen all around and all topped with the same heavy purple.  I had opted for a backcountry highway instead of the Interstate highway.  The road was a sweeping serpentine of perfect pavement and the Montana 70 mph speed limits lead to some really exhilarating riding.  I followed highway 83 south past Swan Lake and then Seeley Lake and then caught 200 east towards Great Falls turning south again on 141 until its junction with US 12 through Helena to 287 south to I-90 for the last 30 miles into Bozeman. 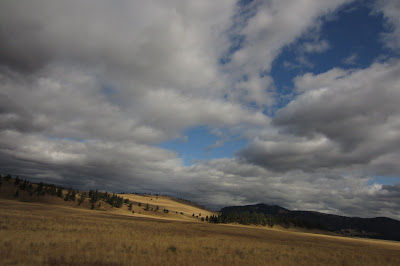 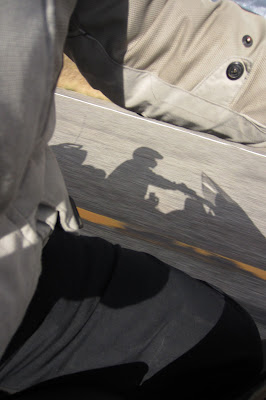 People like to drive fast in Montana.  I got behind a SUV that had passed me on 141 and we zipped along through the rangeland foothills at 100mph almost all the way to Helena.
I pulled into Bozeman, rode directly to Seven Sushi and had some of the best sushi ever.  My great friend Drew Chlebeck and his younger brother Nick own the joint.  This was my first visit since they opened their restaurant.  Drew sliced me up some excellent sushi and even some very rare Montana beef.  And I happily washed it down with some of Montana’s finest craft beer, Coldsmoke Ale from Missoula. 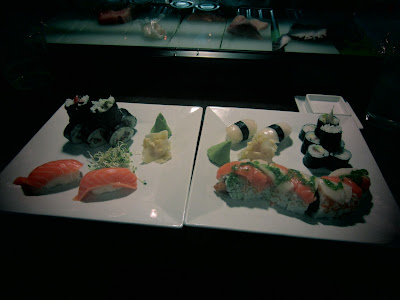 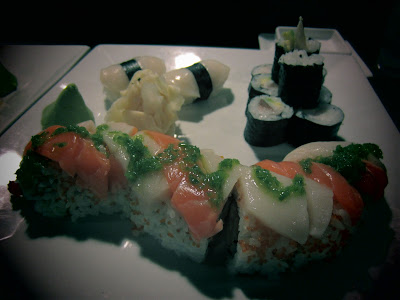 I couldn’t think of a better way to finish off a spectacular ride.  I decided that Bozeman would make a great place to take a day off and rest.  It has been a swift 2750 miles since Fairbanks on Tuesday afternoon which averages out to 500 miles per day in 5.5 days.
Next up:  Yellowstone National Park, Teton National Park and off towards lovely Colorado.
Posted by trails•end•bmw at 7:16 PM