My alarm sounded off at 6 am Yukon time.  I groggily swept the snooze button and rolled back over.  I meant to get to sleep early last night but the "slow-speed" internet in Watson Lake made a long task of updating the blog.  Once I'd finished up, I killed the bedside lamp in my room at the Airforce Hotel.  I pushed the off button on the remote to shut down the background television noise.  This is when I found out that the antique Air Force Motel had paper thin walls and my neighbor had a heavy case of the snores.  I shoved a wad of Kleenex into my dripping nostril and a couple more wads into my ears, rolled over and hoped for the Sandman to come quickly.

The alarm went off again.  I flipped open my laptop and made a quick GOOGLE search for British Columbia road conditions.   Same as yesterday... single lane piloted convoys on the Cassiar Highway leaving from Bob Quinn Lake at 8, 10, 12, 2 and 4.  And then closed after 4pm.  It was questionable whether I'd make it by 4.

I checked the weather hoping it would help me decide whether to push on through the Cassiar taking my chances or to put my desires for Cassiar adventure aside and take the sure route on the ALCAN Highway.  The weather:  12°C for a high, 98% humidity and a 60% chance of precipitation on either route.  I closed the computer, rushed through my morning details, packed the bike and hammered off to the Cassiar Highway.

I topped off my tank with a couple of liters of unleaded at the Junction 37 service station, jammed some more paper towel into my nostrils and gassed my way down this much anticipated route.  The road surface was good aside from a few frost heaves.  In minutes I was passing the big sign that read, "Welcome to Beautiful British Columbia."  I smiled in my helmet and twisted the throttle.  I had 165 miles until breakfast at Dease Lake and another 125 miles to the road closure.  I decided that I would set my sights on the 2pm convoy.  I needed to get through the closure today or I would need to seriously reexamine my route through the rest of BC. 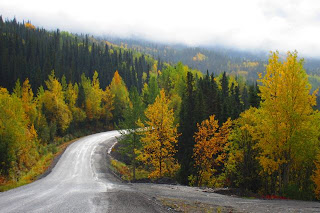 The road was a terrific rollercoaster affair.  Twisting and curving and rising and falling between valleys and lakes and forest.  Not a building or sign of man aside from the chip seal pavement.  I was cruising between 75-80 mph with my eyes constantly scanning the roadsides for wildlife.  The big LT absolutely loving the ride.  For such a stout beast, Shamu absolutely loves the curves.  BMW hit a sweet spot giving the K1200LT a 40° lean angle that no Honda Goldwing has ever enjoyed.  We motored on enjoying dry roads and more colors than the rods and cones of my eyes could keep up with.  Seeing as the first convoy north wouldn't pass the closure until after 10am, I had the road to myself. 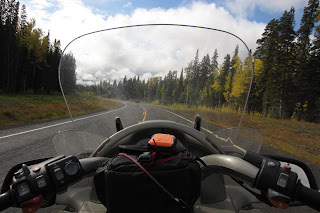 The crisp 40°F air kept me alert and with my newly found solution for my dripping nose, my hands stayed securely gripped on the bars.  The rain came in about 50 miles outside of Dease Lake.  It was a light rain, just enough to make things interesting.  About the time that my tummy was rumbling ready for some grub, I spotted a motorcycle ahead of me.  I could tell that it was a cruiser, most likely a V-Twin, and it appeared to be Japanese of nature from what I could tell from the rear fender.  The rider was moving a bit slower than I had been but since we were so close to Dease Lake, I opted not to blow by and followed him into the gas station.

The bike was a Suzuki Marauder with no windshield.  I thought about how much I loved having the full protection of the big LT's electronically adjustable windshield and flip out fairing extenders, oh yeah and heated seats and grips and tunes and...

I came to find out that the rider was a Fairbanks resident named Steve.  He was delivering this bike to his son in Seattle after having just purchased himself a Suzuki V-strom.  We chatted a bit more while fueling up and then shared a table for a quick hearty breakfast.

After Dease Lake the road got much better yet.  Shoulders grew alongside the lanes and the highway swooped and swayed between the mountains crowding in on the valley.  The light rain persisted and clouds hung snugly to the mountaintops most likely dusting them a virgin white just out of sight. 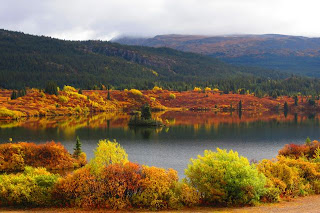 I crossed a couple more steel deck bridges, this time they were complete with warning sign for motorcycles.  I was glad to have warning this time.  I motored consistently southward watching the clock and doing quick computations in my head trying to account enough time for a couple snapshots without missing the 2pm pass. 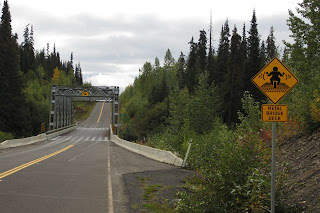 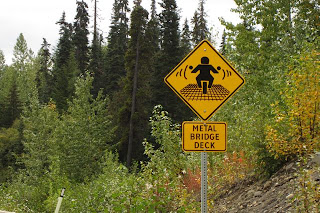 I made it, by ten minutes.  Used to pulling up to the front of the line at traffic stops in Latin America, I ducked to the right of the cue and rode straight to the front.  I got a couple of snotty looks but I shirked them in stride.  I talked to the traffic guy and he showed me where to park to await the pilot car.  Less than ten minutes later we were on our tour through the destruction zone.  Five different mudslides had come down threatening to close the Cassiar completely.  Most of the debris had been removed from both lanes.  Big excavators loaded up dozens of huge dumptrucks that roared alongside of our passing convoy.  Occasionally I caught glimpses of the avalanche chutes that had ejected their muddy gravel payload with the help of heavy rains and gravity.

As we rounded out our hour long tour, I looked at a sign claiming last fuel for 175kms.  I flipped through the onboard computer screen and came to my range to empty figure: 177 miles.  Easy.  I passed the pilot car and the gas station just in time to slam on the brakes for a black bear and her cub crossing the highway.  I was excited to finally see some wildlife.  Aside from a little bird that bounced off my windshield early in the morning, I'd seen none.

In the next couple miles I spied three more sows with cubs and five big male black bears.  The sows stood alongside of the road until they caught glimpse of me and then mother and cub would bound off into the brush frantically.  But the last three males just stood stoically watching me roll by on idle snapping quick snapshots.  I thought about stopping and framing up a proper shot, but the thought of a quick swipe of a clawed paw made me choose otherwise. 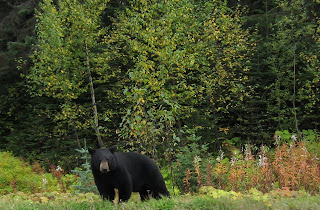 A lesson that I've learned numerous times over throughout South America was reminded to me:  never pass an open gas station unless your tank is full.  My fuel light had come on and there wasn't even a mileage marker or sign to be seen since I'd turned towards Kitwanga.  It dawned on me that the next fuel that had been advertised 175 kms away must have been on 37A on the route to Prince Rupert.  Unfortunately, that was not the route that I was travelling.  I ducked behind the windscreen, reached down and flipped in the fairing extensions and hoped by being more streamlined, I'd make it to a gas station.  15 kms from the junction of Highway 37 and 16 on a downhill, I glanced at my odometer... 296 miles since I fueled up.  I'd never seen a number that high from one tankful before.  And just like that, sputter, sputter, sputter... and then just the silence of the wind.  I pulled in the clutch lever, shifted down into neutral and coasted down the hill.   I came to a stop at the turnoff for a small village advertising a 'Gas Bar' only 2 kms away.

My first thought wasn't how I was going to get gas however.  It was, "the last bear I saw was 2 miles ago."  I wondered silently how long it would be until I saw my 14th bear of the day as the evening light began to fade.

Fortunately for me, I ran out of gas at the entrance to the village with the friendliest population in British Columbia.  Every single car stopped to see if I was o.k. but when I asked if they had gas, they all said a simple shy, "no," and pointed to the village.  I reflected on one of my favorite sayings by author Ted Simon in his famous motorcycle novel, "Jupiter's Travels."  Paraphrasing, "When I have trouble on the road, I never wonder if help will come.  I simply wonder who will come this time."

And sure enough a young native mother and her son pulled up in a two-door Saturn with Volcom Stone stickers plastered to the tinted out windows.  When I asked her if she happened to have any gas in the car, she smiled.  I knew she didn't have any gas in the car.  Who carries around a can of gas in their car? But instead of saying no, she said, "I've got a Jerry can at home, we can get you some."

But of course she came back.  In less than five minutes, no less.  Her boy was mesmerized by Shamu.  She told me that he had a little Suzuki dirt bike at home and it was his pride and joy.  I told her that she better be careful or he might grow up to be just like me some day.  We laughed while I poured the roughly two gallons of gas into the bone dry fuel tank.  I gave her the change she'd brought back as a tip and slipped a couple Trail's End BMW stickers into the little boy's hand.  He smiled shyly up at me.  I thanked her again for saving me from the bears.  She laughed.

I fueled up fully at the next gas station and rode off into the waning light and stiffening rain to Smithers, where I checked into the last motel room in town.  It is my intention to camp as much as possible, but with my head cold worsening, the last thing I felt like doing was setting a tent up in the rain and darkness.  Thanks John.  ;-) 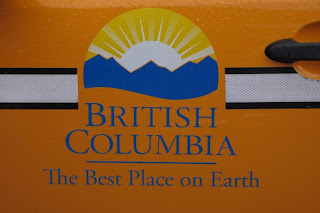 Another 12 hour day behind me.  I wonder what tomorrow will have in store.  Too bad I've got to get up and go to work again.  Heading East on 16 tomorrow, hoping for better weather on the Icefields Parkway and Jasper, Alberta.
Posted by trails•end•bmw at 1:13 AM