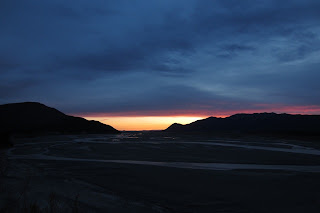 Awake before daybreak today. Had the tent and sleeping gear packed up before 5:45am Alaska time. The dawn ambrosia was just warming up the sky when I fired up Shamu. The clock read 5:47 am. And the thermometer read 37°F. I pulled out of camp and throttled onto the highway. Deep blue filled the sky and the full moon shone over my right shoulder as I motored on towards Destruction Bay. I was happy to be getting a jump on the day. 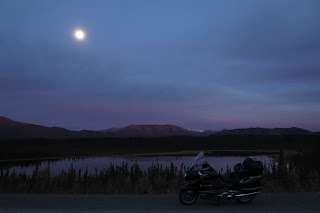 The highway was in similar condition to last night. There were sections of good pavement in between long section of really rough pavement. I stopped to snap a couple pictures of the morning colors in a few places.

I decided that since the highway was empty I would set the cruise control at 80 mph and hammer out some distance. About 5 minutes into this push, I hit a bump in the road that bottomed out my front suspension with a thunk. I instinctively hit the brakes softly expecting a lub lub lub of a flat front tire. I slowed to 50mph and tried to sense any anomalies through the big swept back handlebars. Nothing. I decided that was my get out of trouble free card and set the cruise to a modest 60mph. Eyes glued to the road surface looking for imperfections, I cruised along trying to ignore the cold penetrating my coat and focus on the heat coming from the grips and seat.  Occasionally I'd break my concentration to flip up my visor and wipe my dripping nose.

The wind picked up once the valley opened up and I found myself coming out of the shadow of the mountains. I could see Kluane Lake stretching out on the horizon. The source of the gusting wind less of a mystery. I raced past Burwash Landing to coffee, breakfast and fuel at Talbot Lodge in Destruction Bay. 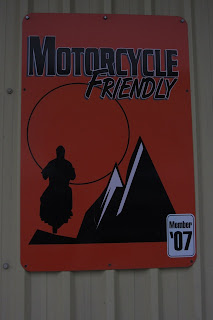 I was met with a warm Canadian smiling hospitality and a hot cup of coffee, two eggs over-easy with ham, farm potatoes and rye toast smothered in melted butter. 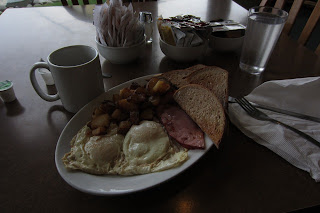 Hundreds of miles left to go today. I'm hoping the sun will burn off the clouds.  And praying to be spared from rain and/or snow. 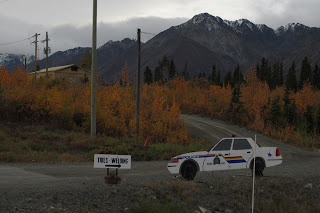 I got a pretty good kick out of this Yukon speed trap.  It certainly got my attention... for a second. 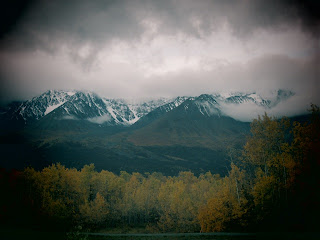 The highway got much better after destruction bay.  It was hard to pay attention to the road as I was riding along Kluane Provincial Park.  The lake and the mountains were just astounding.  I set the cruise control at 120 kph and cruised along through outstanding scenery to Haines Jct.  The mountains were dusted in freshly fallen snow. 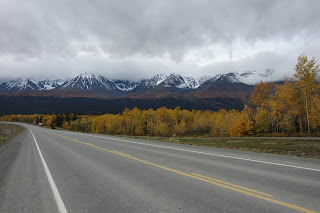 After Haines Jct. I pretty much set the cruise control and b-lined it for the next 6 hours or so.  The scenery was terrific but it started to rain.  And rain, and rain. 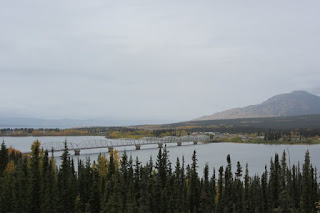 The scariest part of the day was crossing the long Teslin bridge.  This bridge has a steel deck that is see through.  I'm failing at coming up with a good description.  It was super slippery and the bike wanted to wander all around.  My biggest mistake was glancing down and seeing the river flowing by below.  I consciously tried to relax my grip on the bars.  I really thought the bridge might get the better of me.  I stayed focused on the other side and eventually I was back on pavement.
I actually spent the rest of the day in the rain until the turnoff for the Cassiar Highway.  I was disappointed to find out that the Cassiar Hwy. 37 was temporarily closed due to heavy rains and mudslides.
I continued on to Watson Lake and arrived at sunset.  I found one open room at the AirForceMotel at the end of town.  I've come down with a head cold from riding in the rain today.  I'm hoping it is short lived.  My plan is to check the internet early in the morning to see if they will be bringing one lane of traffic through the affected area of the Cassiar.  I've wanted to ride that highway for a long time.  Hopefully the rains subside and I'll get a chance at it. 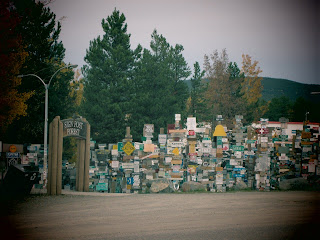