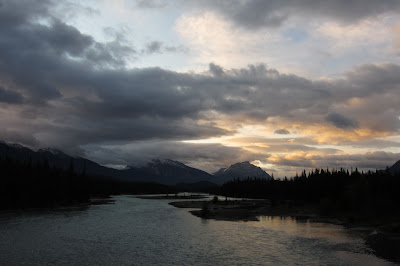 Jasper National Park, Alberta, Canada:   7:30 am - 36°F.  Occasional freezing rain and snow.
I couldn’t think of anywhere that I’d rather be than behind the handlebars of this amazing BMW motorcycle.
Stan knocked on my door at 7:15 am as I’d asked him to do last night.  He was getting ready to leave for a day of Search and Rescue training in the foothills outside of the park.  I looked at my phone wondering why my alarm hadn’t gone off.  I set the alarm for 7 am before I went to sleep last night.  When I looked at the phone it was immediately clear.  My phone read 6:16.  I’d ridden across another time zone without knowing it.
I was groggy and considered going back to bed.  I shook it off, made my way hastily through my morning duties and suited up for another day of adventure about the BMW Luxury Tourer.
Stan and I chatted in the street while the motorcycles warmed up in the crisp cold morning air.  The sky was light but it would be a couple hours before the sun would crest the mountaintops to the east.  Stan told me that I’d probably have some bad weather once I got closer to the Columbia Icefield pass.  We shook hands while I thanked him over and over again for the comfy bed to sleep in.  Shivering slightly there in the street, I knew I would have been pushing the limits of my 0°F rated down sleeping bag had I ended up in the Whistler Campground.
I opted to skip breakfast for the moment and scoot out of Jasper hoping to catch some alpenglow on the huge jagged mountain peaks.  My ride into Jasper last night was stunning and I was so excited to ride the Icefields Parkway through Jasper National Park.  My planned route would take me through three Canadian National Parks back to back.  First passing through Jasper then crossing into Banff and then into Kootenay before rounding down into Radium Hot Springs. 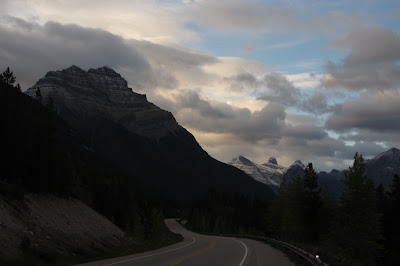 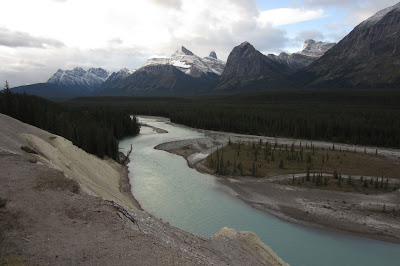 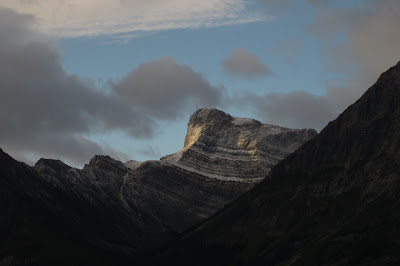 My first miles of the day, I shivered along stopping frequently awestruck by the mountains looming over me on both sides of the road.  Clouds stuck to the mountaintops and I could see their dusty white produce just below cloud level.  The mountains here are just amazing.  Rough and jagged reaching straight to the heavens with little left to the imagination, this landscape is incredibly powerful.  Each mountain has its own personality.  The overall height of these peaks is quite a bit lower than the Rockies of Colorado but the vertical rise is similar if not greater here.  The treeline is much lower than I’m used to giving a totally different appearance; one of enormous eye-crushing grandeur. 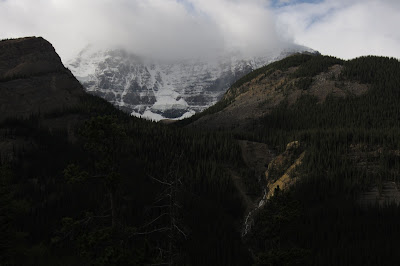 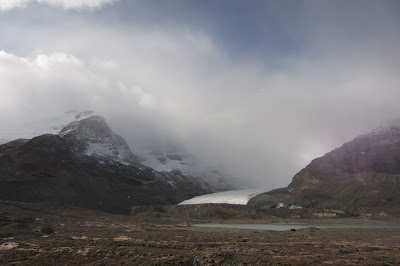 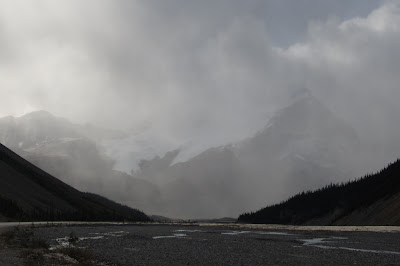 When I saw a sign for a roadside restaurant, I decided it was time to pull over and fuel my body with something warm.  Plus my camera battery warning indicator had started flashing red.  I parked, grabbed my charger, and headed into the warm touristy restaurant. 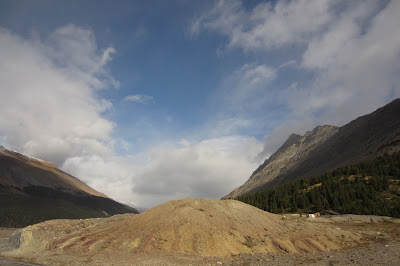 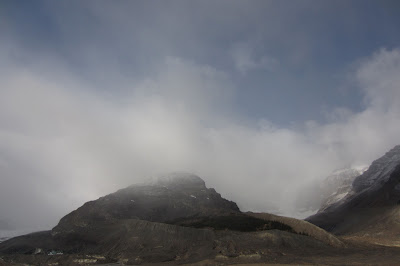 The clouds had covered up the peaks and I worried that I may have made a mistake by stopping.  I hurried through my “Bus Driver’s Special,” which was a finely crafted breakfast burrito with bacon, cheddar, roasted peppers and scrambled eggs served with breakfast potatoes.
Back on the bike I was happy to see that the clouds were an ever-changing display and not a hunkered down get ready for winter kind of clouds.  I motored on stopping nearly every mile to snap another photo or ten.  The snow started up around the icefield.  Sun fought its way through the flakes creating a sublime display.  The glacier was beautiful working its way down to its terminal lake.  I could see big ice rover tour busses inching along way up the glacier.  I thought about what a miserable way to travel busses are.  Hundreds, actually thousands of people packed into motorcoaches to be hustled through the park in warmth and comfort only to pile out and get into another bus, this time an all-terrain model, to take another slightly less comfortable ride bumping up a glacier.  All of this touring without ever really experiencing the joy of a numbing nose and the exhilaration of stinging raindrops on ones face while trying to manage a 800lb motorcycle on less the perfect road conditions.  I bet those silly tourists stayed in a 5 star hotel and ate first class food and I even bet someone else carried their luggage to their room too!  Who could stand for such babying? 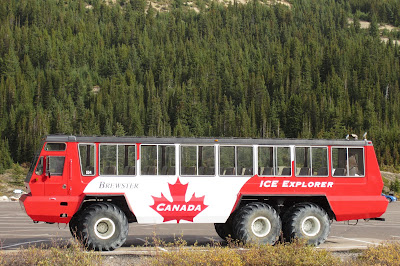 I rode higher and higher up the pass.  The weather got worse, the snow picking up in intensity and even starting to stick to the shoulders of the road and to my windshield.  And every mile that the weather worsened my smile grew bigger until it nearly burst through my helmet at the summit. 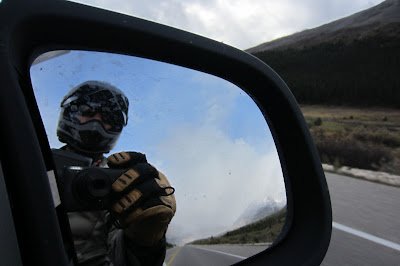 The clouds on the other side of the pass broke for a moment revealing the most incredible view dropping immediately away into the next valley and Banff National Park.  Encore!  I could see the road twisting down the mountainside like a piece of limp spaghetti tossed off the kitchen counter.  I wanted to stop to take a photo but my desire to lean the BMW into each and every one of those switchbacked curves was so great that my fingers simply wouldn’t work the brakes to pull over.  My wrist disobeyed ever order from my brain and kept twisting the throttle further revving my joy to near redline. 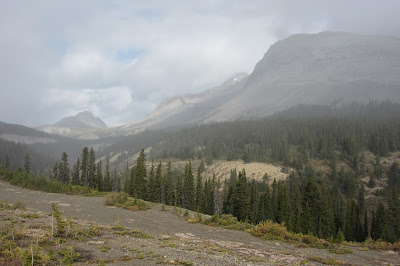 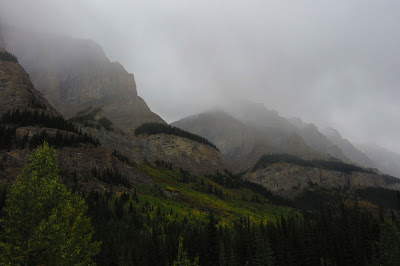 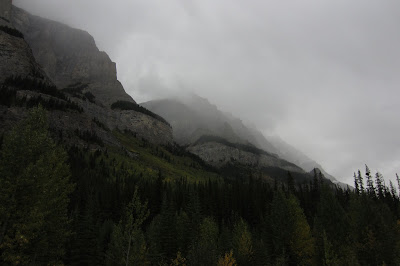 I saw my first yellow leaves since the Cassiar Highway hundreds of miles ago.  Crystal clear glacier green rivers raced by alongside the beautifully paved parkway.  The weather worsened but it was actually to my benefit.  If the sun had burned away all of the clouds it could have taken me weeks to get to Lake Louise.  Even though I couldn’t see the mountaintops, I could feel their presence looming over me. 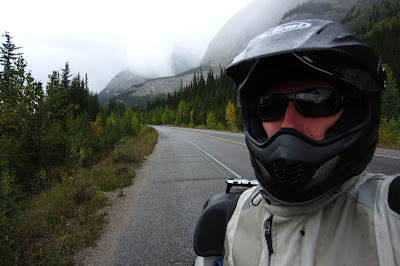 Soon I found myself racing along a four-lane brand new highway heading towards Banff.  A few miles more of this high-speed nonsense and I was winging off onto Highway 93 south again, this time into Kootenay National Park.  The road was a little less perfect and the scenery was great, though not quite as astounding as Banff and Jasper.  But the weather was getting better and the temperature was warming.  Several forest fires swept through the area in years past leaving their mark on the landscape.  Thousands of bare aspens filled the mountains with a void stark gray. 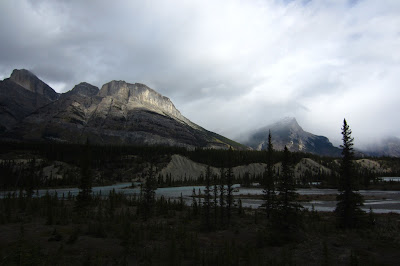 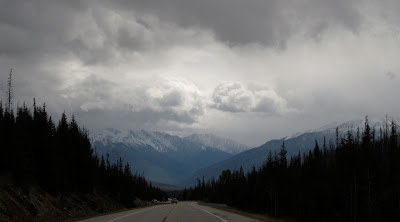 The road continued its descent and with every mile the temperature climbed.  Just before Radium Hot Springs I spotted a white rental car pulled off on a side parking lot,  I looked with curiosity wondering why they would be parked in such an odd spot.  Two huge Bighorn Sheep stood only a stones toss from two tourists snapping pictures.  I pulled over and popped a couple quick shots.  The tourists were an English couple who were more than eager to chat with me.  The old man with rotten teeth was rambling on about every motorcycle connection he ever had.  Mostly stories about other people.  Unfortunately the whole time he was rambling on he stood between me and the Bighorns.  I missed several great shots and finally resorted to snapping shots of the big beasts nibbling salt from the pavement with no more than a highway maintenance facility for a backdrop.  Well at least now I know every motorcycle that this guy’s son has owned… 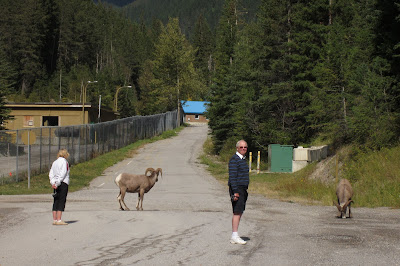 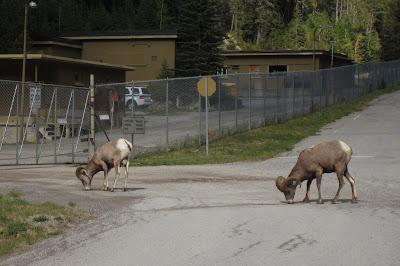 I stopped at Radium Hot Springs planning to hop in for a soak using the free pass Parrish Moses had given me back in Fairbanks.  The thought of rearranging everything on the bike and dragging all my valuable gear and trudging into this packed facility was less appealing than the thought of soaking on hot natural pools.  I stopped a couple that was leaving and asked about the springs.  “Yeah it’s a big swimming pool with warm water and hundreds of people.”
A young guy with three kids had just pulled up near me.  I went over and gave him my free pass.  He was delighted.  He told me it gets a bit expensive for the family but his kids just love playing in the warm pool.  All is well and I motored off down the tight canyon with walls that nearly arched over the roadway they were so tight.  Next thing I knew I was back on the valley floor in 66° F clear weather.  The valley was wide and full of yellow fields of hay.  I motored off for Fernie at a swift 120 kph. 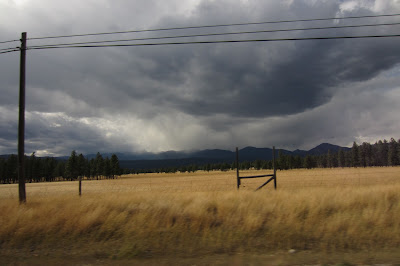 A few mule deer eating on the side of the road and lots and lots of farmland were all I passed.  When I turned away from Cranbrook heading to Fernie, I came into the mountains again.  I expected an excellent ski town in Fernie to have a few beers and find a place to camp for the night.  Though the ski area looked impressive, the town was not, so I fueled up and rode on.  A half hour past Fernie, I came to a traffic jam.  I jumped on the shoulder and tooled along slowly until I came to another motorcyclist.  I joined him in his lane and chatted with him for some time.  He was riding a well outfitted FZR and said his pillion passenger was walking several miles ahead to find out what was going on.  They’d been there for 45 minutes already.
Turns out there was a head on collision between a pickup and a mini van in one of the corners on Crowsnest Pass.  Double fatality.  What a shame. 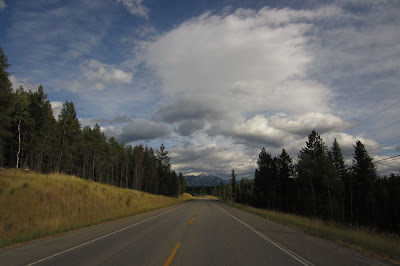 About a half hour later the roads opened up and I was moving again towards the border.  I stopped for some quick fast-food at an A&W and rode off into the darkening night for the Montana border at Chief Mountain.  I got a up-close view of the biggest bull elk I’ve ever seen.  A little too close, like about 6 feet in front of me as I rounded a corner in the dark.  Thank God for Brembo brakes!
I entered my fourth National Park of the day when I crossed into Watertown Lakes N.P.  I passed a sign stating the hours of operation at the border offices.  9:00-18:00
Missed it by several hours.  Right next to that sign was a sign for River Belly campground 17 kms ahead.
The campground at River Belly was closed so I continued on to the border where I found a beautiful pull-off with relatively flat ground and an incredible view into the mountains of the Watertown-Glacier International Peace Park.  I set up my tent, wondering about bears.  There were elk tracks everywhere and even some nice cow patties.  I hoped the rustling of my nylon tent would keep the bears at bay.  Just in case, I grabbed my Gerber knife and kept it close to my sleeping bag figuring that should a Grizzly make the terrible mistake to mess with me I’d simply stab it in the eye!
Posted by trails•end•bmw at 6:29 PM