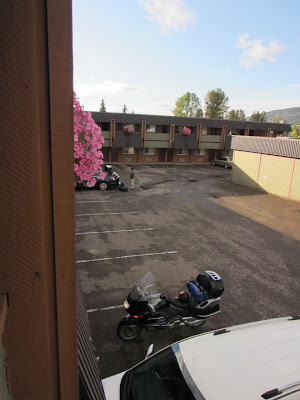 SUNSHINE!!!                                                 High 60° F  Low 48° F  Occasional drizzle, lots of sun.
I woke up at 7 am and looked out the window of my motel room.  Puffy white clouds capped Hudson Bay Mountain.  Bits of blue sky tried to peek out around the clouds, but it was looking like it would be another day of rainy riding.
I crawled back into bed.  I’d slept like a baby all night and the room was still void of any rogue noise.  I quickly drifted off to sleep again.  My second alarm went off at 8.  I repeated the process of peeking out the window.  This time to my surprise the clouds were breaking and there was now more blue than white.  I quickly put on a pot of complimentary coffee and jumped in the shower.
The process of packing the bike and gearing up took all of twenty minutes.  I slurped down my coffee, ate a bag of salted peanuts and motored out of Smithers with a full tank of gas and a giant smile warmed by the rays of sun shining brightly into my helmet.
This was the first I’d seen real sunshine since Tuesday when I left Fairbanks.  My nose had totally cleared up, my sinuses as well, and I felt tremendously better.  Maybe it was the shot of whiskey my bartenders Jade and Melissa deemed that I needed with my dinner last night.  I pointed the big BMW 1200 East and twisted the throttle excitedly.  The pavement on British Columbia Highway 16 was impeccable with large lanes and wide paved shoulders.  The landscape was bright green with only a hint of autumn in the air.  I rode briskly past forests, rivers and hayfields freshly cut and rolled into giant bales for coming winter. 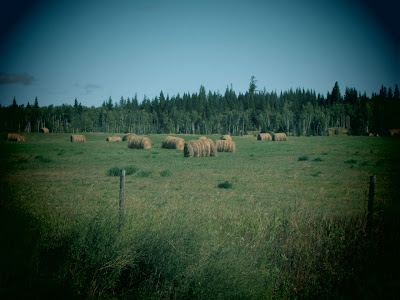 I felt like I’d been transported to an entirely different place than I’d ridden into yesterday.  It was a strange cross of Minnesota and Colorado, two of my favorite places.  The valley floor had the reminiscent fields, farms, lakes and rivers of the Midwest, while in the near distance mountains rose up and created a sublime horizon backdrop. 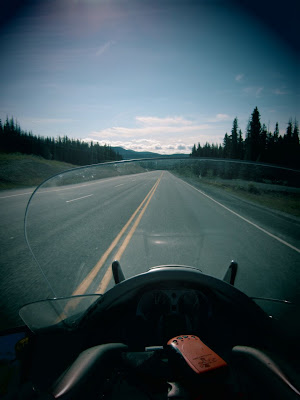 The road opened up and straightened out as the mountains receded and faded into hills.  Did that sign say 100 kph?  Whoops.  It amazes me that the LT is just as stable and nimble at a 100mph as it is at 30.  Other than the plywood cutout of a police car back in Destruction Bay, I hadn’t had the pleasure of crossing any RCMP, or Royal Canadian Mounted Police, which is good because I set the cruise control at roughly 100 miles per hour for the first hour of the day.  I passed logging truck after logging truck on my way towards Prince George swooping through curves like I was riding a giant flying killer whale.  What was in that coffee? 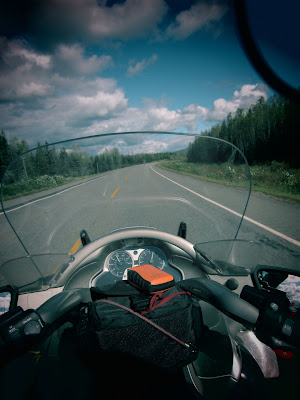 But then just when I was thinking I’d be in Prince George in no time, I got stuck in a no passing zone behind a logging truck full of freshly harvested trees.  I snuck out onto the centerline to check my options for a quick pass and whoosh a decked out RCMP squad car zoomed past in the oncoming lane.  O.k. so British Columbia really does have Police.  When I finally got around the truck I decided I’d stick to 20kph above the speed limit.  The road straightened out and passed by quickly.  Soon I was rolling down a steep winding grade and the highway became two lanes in each direction.  I was in Prince George. 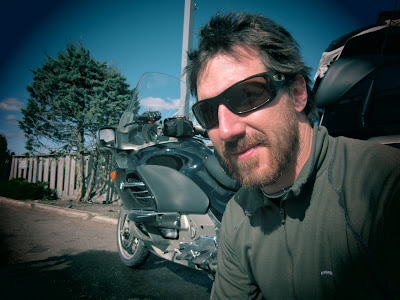 I’d fueled up about 20 minutes earlier so I simply followed the signs for Jasper and continued on through this rather large junction city.  I crossed a big river and climbed another hill.  The sign said some 170 km’s to the next gas.  I had enough.  I hoped.  Snow dusted mountains could be seen to the north and forested mountains to the south.  I cruised along at a swift 120kph along the tree lined highway for several more hours soaking in the sun and scenery.  Occasionally clouds would gather and sprinkle on me but never for very long. 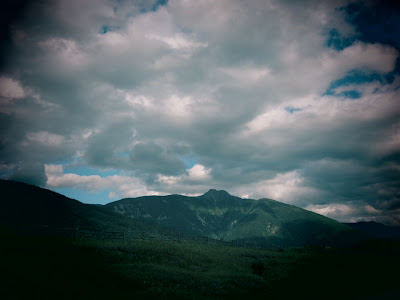 I fueled up again and snacked on some pepperoni sticks and a bottle of orange juice realizing that it was already 2:30pm and I hadn’t eaten a real meal yet today.  I felt good so I decided to push on to Jasper, where I’d have dinner and then find a campground.  I looked in the sideview mirror and saw a bright red face looking back at me.  Sunburn.  A little late for sunscreen but I guess better late than never.  I lathered my nose and cheekbones up thick and prepared for the last 200 km’s of my British Columbia traverse. 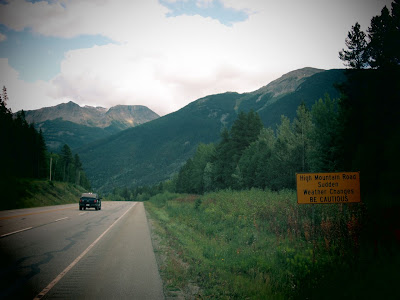 The mountains closed in on the valley and everything got really big on both sides of the highway.  I rounded the corner and nearly fell out of the saddle at the sight of giant Mt. Robson.  Robson is the biggest peak in the Canadian Rockies and to say that it was impressive is a gross understatement.  Steep sheer faces laden with snow, avalanche chutes dumping down into huge white aprons of debris and clouds clinging to its face appeared miniature to its massive bulk looming over the highway that rode straight at it.  I was awestruck.  I pulled off to the side of the road stopping to take pictures for the first time today.  I’d settled for snapping the occasional shot while riding before but this was too amazing not to stop. 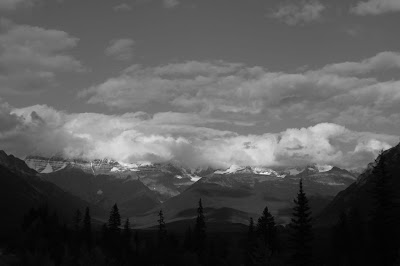 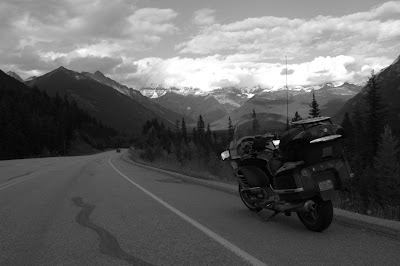 The rest of the ride to Jasper was incredible too but nothing I’d seen on this journey hit me quite as hard as the first sight of Mt. Robson.  Welcome to Alberta, the Wild Rose Province. 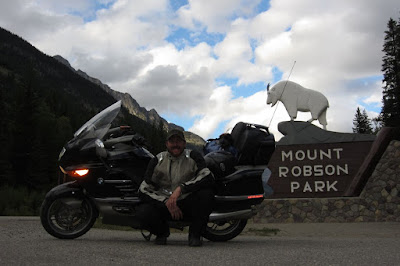 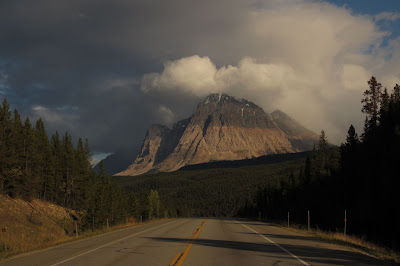 I motored into Jasper only to find out that it is the weekend of the annual Jasper Motorcycle Rally.  What a coincidence.  I also found out that all but one of the National Park’s campgrounds are closed for the season.  I got directions to Whistler Campground, swung into the grocery store and grabbed a bottle of water and some Lipton Rice packets. 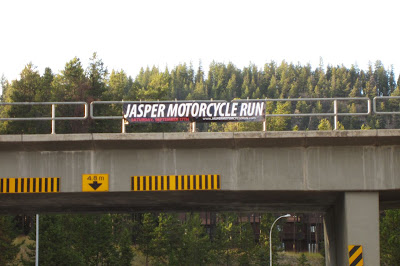 I lapped the little ski/tourist town a couple times checking out the motorcycles parked along the road and waved to the bikers.  I decided it would be a shame not to have a beer and some dinner before I made my way to camp.  Evening twilight was lighting the mountaintops with a warm alpenglow and somehow I felt home.  Nothing like a good touristy ski town to make me feel welcome in a foreign place. 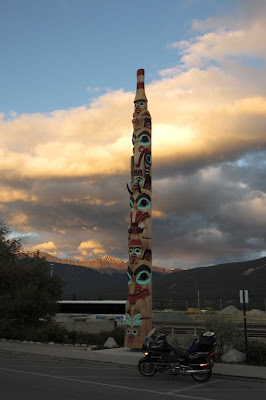 I rounded through the streets dodging gawking tourists and wondered when my intuition would say, “HERE!”  Finally it did when I passed a parked R1150GS for the third time.  I backed Shamu in next to the GS and wandered into the Dead Dog Saloon and pulled up a seat at the packed bar.  The bartender was friendly and poured me a frosty pint of local brew.  I ordered a homemade chicken pot pie and a mixed green salad with Italian dressing.  The pot pie ended up being straight from the grocer’s freezer and the salad came with ceasar dressing, but the beer was excellent.
An odd sensation came over me midway through my meal that I should go out and check on my bike.  I slid my barstool back and walked out to the darkening street to find the GS owner backing up on the other side of my moto this time.
I started chatting with him.  Turns out that he is a local here in Jasper.  He introduced himself as Stan.  I asked him about the campground and how long of a drive it would be to get there.  Stan started giving me directions.  Halfway through his discourse on how Whistler was the only campground left open, information I already knew, he stopped mid-sentence and asked, “Can I offer you a bed and a shower instead?  I’ve got a lock-off apartment at my house and no one is staying in it tonight.”
So here I lay in Stan’s lockoff, freshly showered after a couple of pints and some live music and lots and lots of motorcycle chat with riders from all over Canada and the US.  I handed out lots of business cards and invited riders from all over to swing by the shop if they ever found their way to Fairbanks.  Stan and I made plans to meet in Dawson City next summer for the Dust 2 Dawson gathering that I attended this past June and to ride the Dempster Highway to Inuvik.  Another great friendship made and a damn fine shower and a bed to sleep in instead of a cold tent.  Not too shabby Jasper, Alberta.  I think I’ll take back all those snide Canadian jokes I used to tell.  “Like take off eh, that’s my Elsinore beer you hosebag.”
High 60° F  Low 48° F  Occasional drizzle, lots of sun.
Posted by trails•end•bmw at 1:05 AM