Planning out what roads to take can be one of the greater joys of motorcycle touring, aside from the actual riding of course.  This trip has been unique in that I have a set end destination.  My Latin American journey was much more loosely organized.  My schedule was wide open and other than knowing that I eventually wanted to end up in Ushuaia, Tierra del Fuego, Argentina, I didn't labor over choosing an exact route.

For this trip, I knew that my time would be very limited.  The date of the BMW Dealer Trade Show is fast approaching.  I needed to wrap a few deals up at the shop before I could get out of town as well.  This has left me with just enough time to prevent having to simply hammer down the interstates to Texas.

So choosing my route is important.  I talked over the British Columbia portion extensively with regular Trail's End BMW client Parrish Moses.  Parrish, an avid motorcyclist and BMW R1200GS owner,  just finished a several week foray through the territory and had great information for me on road conditions and 'not to miss' route choices.  He brought me a map of BC and we highlighted a zigzagging line through western Canada. 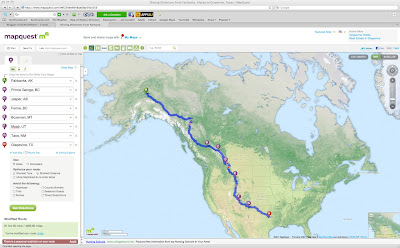